Honda CB200X First Ride Review - What Is An ‘Urban Explorer?’

Is it a mere slap-on job or is there more to Honda India’s adventure-looking motorcycle? 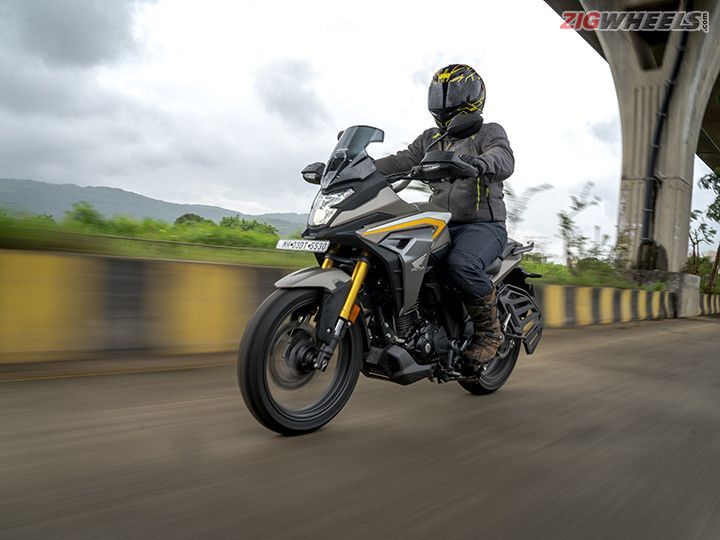 No long-travel suspension. No large 21- or 19-inch front wheel. No extra ground clearance. Even though it bears an ‘X’ in its name, the three basic ingredients that one needs to make an adventure motorcycle are missing from the Honda CB200X. So if it isn’t a proper adventure motorcycle, what exactly is the CB200X? Lets X-plore.

Has The ADV Presence
Underneath the adventure garb, the CB200X is still the same Honda Hornet 2.0 naked. The LED headlight is the same one as the naked on which it is based, but the half fairing adds a lot more visual mass. The faux radiator guards, too, do nothing more than to make the motorcycle look cool.

The CB200X arrives in three shades -- Sports Red, Pearl Nightstar Black and Matte Selene Silver Metallic -- of which the silver was our pick of the lot. The styling additions to the front make the motorcycle look quite handsome. We particularly like the touch of integrating the LED indicators into the knucleguards, as it gives the bike a premium vibe.

You do not find nearly as many cuts and edges on the side panels as the Hornet and it even looks a bit chunkier towards its tail. Lastly, the X-shaped LED taillight remains unchanged.

Sadly, the Honda CB200X doesn’t have many modern features to boast about. Besides having all-LED lighting, the only modern bits on the CB200X are the negatively lit digital LCD dash and a hazard light switch. The dash also displays minimal data and there’s no distance-to-empty or range indicator. What we would’ve ideally liked to see is Honda throw in a USB charger at least to keep up with the times.

Feels Like A Larger Capacity Bike
Swing a leg over the CB200X and you notice the ‘real’ tweaks that Honda has made to the rider’s triangle, when compared to the Hornet. The controls have been pulled closer to the rider, the handlebar is wider and significantly raised, and there’s a new seat with thicker foam, which pushes the seat height up by 15mm. But even at 810mm, the seat is fairly accessible to riders of all heights as the bike’s mid-section is fairly slim. It feels quite spacious too, something that larger riders will appreciate.

Overall, the posture is more upright, giving the rider a better sense of the road ahead. You feel more connected to the bike and what it does well is that it gives off a sensation that you are riding a larger capacity motorcycle.

Peppy And Tractable
The Hornet’s 184cc single-cylinder air-cooled 2-valve motor has been carried over in the same state of tune (17.27PS and 16.1Nm) as well as the same gearing to the CB200X. While we will have to put the CB200X through our thorough test cycle to figure out any difference in performance, this faux ADV doesn’t shoot off the line as quickly as its naked sibling, which would primarily be down to the five extra kilos (147kg kerb) that it has to lug around.

Nevertheless, the engine still feels peppy and eager. What is highly appreciable is just how easy it is to live with the motor on a daily basis. The healthy low- and mid-range performance allows it to be ridden at really low speeds in higher gears. Just chuck it into fifth gear and you can ride it around town like an Activa. Plus, the slick five-speed gearbox and light clutch action come in handy when you need to execute a quick downshift to get past slow-moving vehicles.

Within city limits, and when sticking to city speeds, the engine remains buttery smooth. Once the revs cross the 6500rpm mark, though, the vibes do start creeping in and it starts sounding a bit gruff. And as soon as you leave the urban jungle for some proper ‘exploration,’ you realise the motor’s shortcomings. It can only sustain 80-85kmph comfortably and there’s barely any more performance to be had post 7500rpm.

Pliant And Comfortable
Not only does the CB200X share its motor with the Hornet, but also all its other hardware. There’s no change to the suspension tune or the travel of the golden Showa USD fork and preload-adjustable monoshock. However, it doesn’t feel as harsh when it comes to ride quality and that’s down to how you are seated on this bike. The front end remains nice and supple but because you’re now sitting more upright, you end up loading the monoshock a bit more. This puts it in its ideal working range of operation, and helps it soak bumps far better. Still, you have to be wary of the really sharp and large bumps which can toss you off the seat.

The CB200X feels very light on its feet and can easily dart through traffic. It is pretty stable around sweepers and thanks to the extra leverage on offer, you can make small mid-corner corrections quite easily. Additionally, it doesn’t feel top-heavy like many adventure motorcycles do, and we feel it is actually an even better handler than its naked counterpart.

Go hard on the brakes and the CB200X, with its 276mm/220mm (F/R) disc brake setup, sheds speed sharply and in a surefooted manner, all the while providing a good feel at the lever too. Even in the wet, the ABS intervention was predictable and controlled but we would’ve liked a dual-channel ABS system just to up its safety quotient.

Like we mentioned right at the beginning, the CB200X is not an adventure motorcycle. It looks the part and the revised riding position might actually convince you it feels like one from the saddle too. Also, the stand-up riding ergonomics actually feel like they’re for adventure riding. Sadly, given all of its limitations, the only adventure riding it is capable of doing is dodging nasty potholes and gnarly speed humps.

X Marks The Spot?
It turns out that the Honda CB200X is actually a nice city slicker, one that is more comfortable and nicer to ride than the Hornet 2.0. And it is a good thing that Honda is calling it an ‘Urban Explorer,’ as we can really imagine enjoying spending hours in the saddle exploring the nooks and crannies of the city. Plus, heading out for short chai-pakoda rides would be fun on this little Honda.

While it is a surprisingly likeable motorcycle (as long as you forget about the adventure part), the bit that is not-so-likeable is its price tag. At Rs 1,44,500 (ex-showroom, Delhi), the CB200X is around Rs 13,000 dearer than the naked with which it shares 95 percent of its parts. So, justifying the premium for that 5 percent difference is hard, especially when you can buy bits like a wider handlebar, handlebar risers and other stuff at a much lower price. And if you want an adventure motorcycle, the Hero XPulse 200 does everything the CB200X does and more, for far less money. Plus, there’s a four-valve variant in the near offing.

So the only reasons we think you would want to buy the CB200X is because you believe in Honda’s penchant for making reliable motorcycles, and you are a big fan of the way it looks. But would you still be willing to pay that extra premium? We wouldn’t.