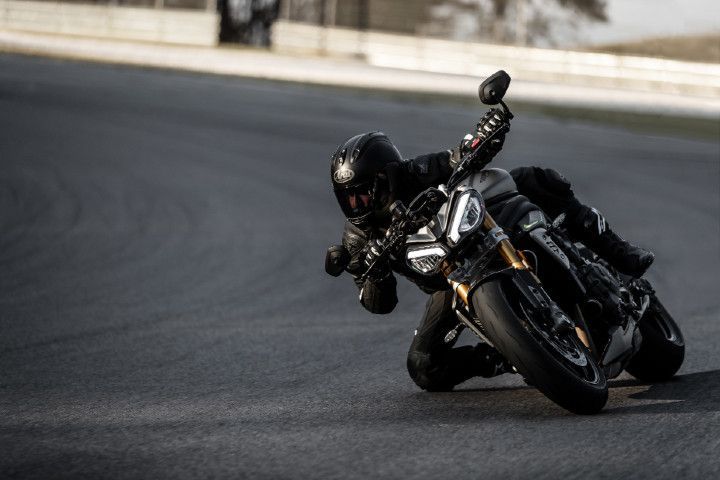 The Triumph Speed Triple 1200 RS gets all the goodies you’d want on a motorcycle of this capacity. Triumph has equipped the bike with fully adjustable Öhlins NIX30 upside-down fork and Öhlins TTX36 twin tube monoshock. Anchoring the Speed Triple 1200 RS are twin 320mm discs with Brembo Stylema radial monobloc front callipers and 220mm disc with Brembo twin-piston rear calliper. Along all these fancy bits, the new Triumph Speed Triple is shod with Metzeler Racetec RR rubber.

Triumph has spared no expenses when it comes to the features list on the new Speed Triple 1200 RS. It gets an all-LED headlight with DRLs, a 5-inch TFT display, keyless ignition and ‘My Triumph’ connectivity as standard. The rider aids include five riding modes, bi-directional quickshifter, cornering ABS, traction control, wheelie control and cruise control.

Looks are subjective, but one thing’s for sure: the new Speed Triple will definitely attract your attention. The Speed Triple 1200 RS looks nothing short of a very well poised streetfighter. The signature bug-eyed headlamps, aerodynamic bodywork and last but not least, the matte finish makes the Triumph Speed Triple a head-turner. It is available in two paint schemes: Sapphire Black with red and silver graphics & Matt Silver Ice with black, silver and yellow graphics.

From Triumph’s latest offering, we rode the Triumph Tiger 900 Rally and here’s what we think about it.