Here’s a closer look at the most affordable Street Triple 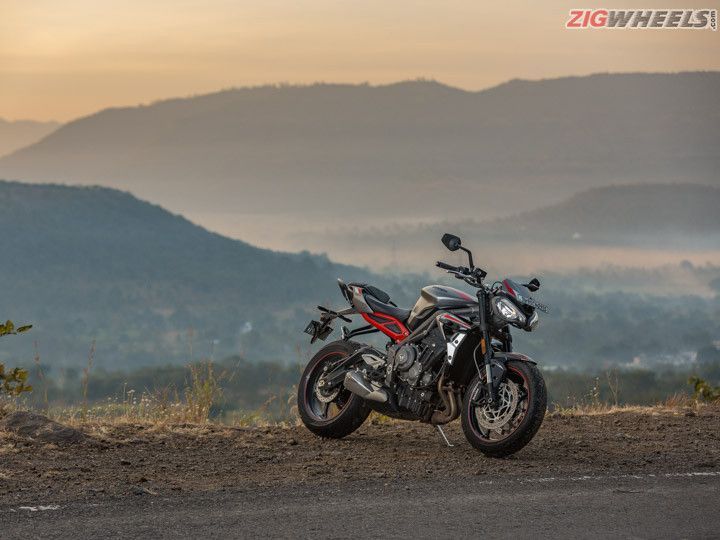 To make the Street Triple more accessible, Triumph launched the ‘R’ variant. It’s priced lower than the ‘RS’ variant and has some notable differences as an overall package. Here’s what the Street Triple R feels and looks like:

There are barely any visual changes on the R variant compared to the RS. It has the signature ‘bug-eye’ LED headlamps with DRLs. However, the Street Triple R gets traditionally mounted mirrors, which which are more function than form. Even though these don’t look as cool as bar-end mirrors, the fit and finish leave nothing to fault.

With no TFT screen, the options to toggle on the console have lessened and Triumph’s modern switch-cube is missing, which means changing settings like traction control gets rather fiddly.

The Triumph Street Triple R gets an in-line three, 765cc, liquid-cooled engine that makes 118PS and 79Nm. That’s the same torque as the RS, but the R makes 5PS less. This motor is mated to a 6-speed gearbox with a bi-directional quick-shifter as standard.

The Street Triple R’s braking hardware consists of Brembo M4.32 monobloc callipers with twin 310mm rotors at the front and a 220m disc at the rear, with dual-channel ABS. The Brembo M4.32s are well suited for road-use, although not as sharp as the M50s.

Suspension duties are handled by a fully-adjustable Showa Separate Function Big Piston Fork up front and a fully adjustable monoshock at the rear.

The split-seat is well finished but misses out on the contrast stitching seen on the RS.

While the ‘R’ variant might have a couple of features less than the top-spec ‘RS’ variant, it still offers plenty of performance and excitement for its price tag of Rs 8.84 lakh.