"One's destination is never a place, but a new way of seeing things." - Henry Miller 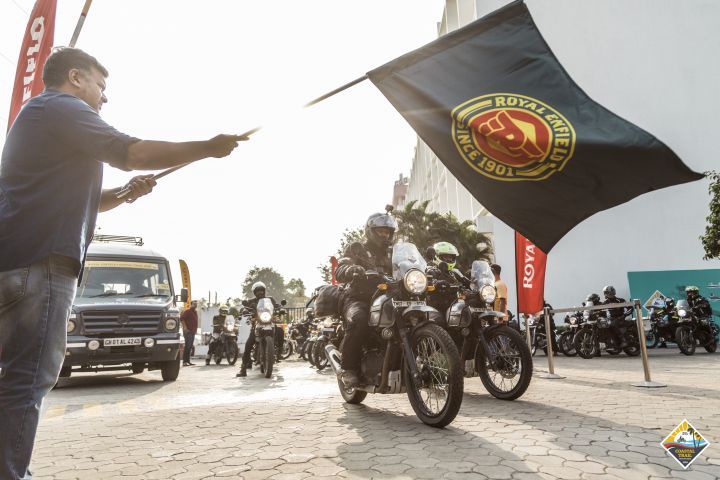 What started off with me cribbing and crying over not getting much time off work, ended up in a sabbatical of a little over a week. Yeah, I guess my folks at work grew tired and felt this was the best way to get rid of me. Either way, I wasn’t complaining. You see, this “sabbatical” that I was on, was an ingenious way of having me work while I was away from work. My penance if you may. To cut to the chase, I was sent to cover the annual Royal Enfield ‘Coastal Trail’.

After catching an ATR flight that scared the bejesus out of me, I was in Agonda, Goa. We spent the first evening chilling by the beach with a couple of beers (as anyone would in Goa) and called it an early night. The journey was to begin the next day on our kitted out Himalayans with a schedule that looked something like this..

Now, instead of giving you the complete lowdown of the next 6 days, which would get a bit boring, I’d rather share experiences that left a mark in my heart.

The first such instance was when we set out on our bikes to explore Goa. After some twisties on the mountain road, a quick detour which took us through one of the best trails in the journey we reached our destination, Cola Beach. The location greeted us to a pristine beach, the open ocean on one side, and a lagoon on the other.

On either side of the lagoon were small cottages lined by trees, which looked straight out of the movies. Mesmerized by the view, we spent a good half and hour or so just trying to soak it in. It’s one of the few places in Goa that isn’t as commercial as Baga, Calangute or Candolim. And, since the beach is in an isolated location, you won’t find any grown men holding pinkies here.

The second highlight of the journey would most definitely be the ride from Gokarna to Mangalore. I’d even go as far as saying it was the most eventful leg of the ride. The 230 odd kilometre ride took us through narrow roads with rice fields on both sides, kilometre long bridges and winding highways with the backdrop of lush green mountains.

But, the most vivid memory would have the be our visit to Murudeshwar temple, best known for its towering Shiva statue. It’s also home to Murudeshwar beach, who’s coastline spans as far as the eyes can see.

Its hard sand made for the perfect playground for the Himalayan, and before we knew it, we were off riding on the beach like a flock of sheep making a break for freedom.

Post some beach shenanigans, we made our way to Malpe, which was host to one of the most colourful ports I’ve ever seen so far. The line of fishing boats curtained with by fiery orange sunset left us speechless.

The Mini-Goa On A Cliff

The penultimate stretch led us from the beautiful backwaters and backroads of Kochi to the best backpacker destination of Kerela: Varkala. Knowing our 6-day long journey was nearing to an end, we took our own sweet time to complete this meagre 135km stretch, stopping to capture every bit of beauty the scenery had to offer.

Photos and videos galore, we headed off to what I can only describe as the “Stairway to Heaven.” Yeah, believe me, it was well worthy of quoting Led Zeppelin! A single narrow road sliced the ocean and backwaters and trekked to a cliffside hotel called Clafouti Heritage Beach Resort.

The kilometre-long cliff is home to a number of restaurants, shops, and ayurvedic centres which overlooks the picturesque view of the ocean. Adding to its beauty were the silhouettes of fishing boats at a distance making their way back home. Highlighted by the sun rays beaming through the clouds, it looked surreal.

This is the view I’d want to wake up to when I retire! Don’t get me wrong, Varkala isn’t purely a destination for oldies. Hell, the setup is such that it could even pass off as a ‘mini-Goa’, minus annoying commercialization, of course. Either way, the spectacular location tends to leave a lasting impression in everyone’s heart.

End Of The Line

The last few days felt like a dream come true. And, considering the time all of us had spent together, it was pretty heart wrenching to complete the final leg to Kanyakumari. Consequently, all of us rode at a snail's pace as we headed towards the finish line.

It all started sinking in as we inched closer towards the end of the line, that is, the Thiruvalluvar Statue. But, it also gives us a sense of accomplishment, having traversed through different cities across the western belt, braving the scorching heat, having survived the manic traffic of Kerala and finally completing the ride in one piece. While this covers the beautiful journey we embarked on, there's still the question of how the Royal Enfield Himalayan FI performed. We will be answering those questions in a second story, so stay tuned to Zigwheels for more.

P.S - Given that I was travelling for a good week and off from the daily grind, you won't find me cribbing for a while now.