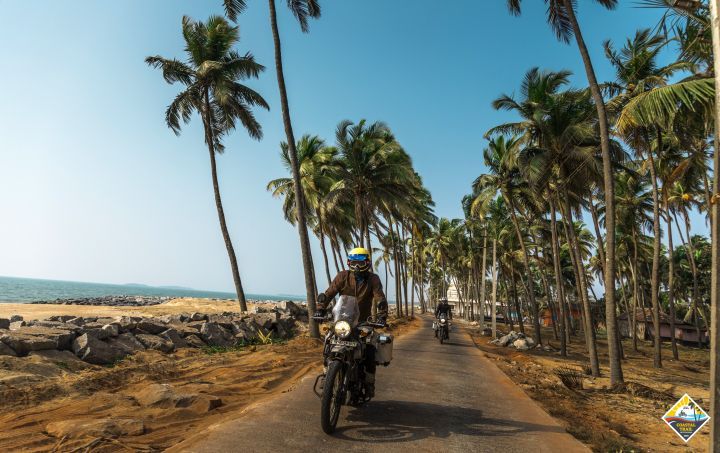 The 2019 edition of the Royal Enfield Coastal Trail was held along the western coast of India and covered a little over 1,000km with some picturesque views on offers. Read our comprehensive travelogue here and stay tuned for our first impressions about the kitted out Himalayan-FI. Together, these two stories should give readers a better idea of how the entire experience of taking part in the Coastal Trail was.

However, as the saying goes, a picture speaks a thousand words. And in this case, on a journey through places as beautiful as these, nothing can do justice to the experience like just showing you some pictures from the trip. So that’s exactly what we’re going to do here.

The journey started off from Mumbai with around 30 participants. Unfortunately, due to prior commitments, we could only join the jaunt from Agonda in Goa.

1: Cola Beach - A secluded location in south Goa that treats your eyes to a pristine beach and a lagoon.

2: The serpentine roads on the mountains of Gokarna led us to this spectacular view. We just had to stop to capture the moment along with our trusty Himalayans.

3. Om Beach - The heat was unbearable and some refreshing coconut water really hit the spot for us.

4: Our second leg from Gokarna to Mangalore took us through some narrow backroads with the canvas of the ocean in the background.

5: As fresh as it comes. Local fishermen with their catch at Murudeshwar beach.

6. The beautiful Murudeshwar beach also turned out to be a proving ground for our Himalayans.

7: On our way to Mangalore, we came across Malpe fishing port. It was one of the most colourful fishing harbours we’ve ever seen. It is situated around 10km from the temple town of Udupi.

8: Aside from the humidity, the narrow roads and traffic on Kochi’s roads took some getting used to.

9: However, we did veer away from the conventional route and were rewarded with winding, well-paved roads cutting through villages lined with trees.

10: Kerala is known for its backwaters and by extension a number of small bridge crossings.

11: But we rode along the coastline for most part of the journey through Kerala.

12: Sometimes, views like these were just a couple of hundred meters away from the conventional route.

13: River crossings are pretty much the norm during the Coastal Trail. And we weren’t complaining.

14: The penultimate stretch greeted us to some trails where we could push our bikes one last time.

15: We realised that we had reached the end of the line when we were greeted by the towering statue of Thiruvalluvar in Kanyakumari.

16: What started off as a group of random people bought together by their love of bikes and adventure became a close-knit family by the end of the journey.

17: Looking back at the expedition reminds me just how beautiful our country is, and it was all made possible thanks to Royal Enfield and the folks that came together to celebrate biking.