Is This The BS6-compliant Royal Enfield Himalayan?

The motorcycle is likely to be launched early next year 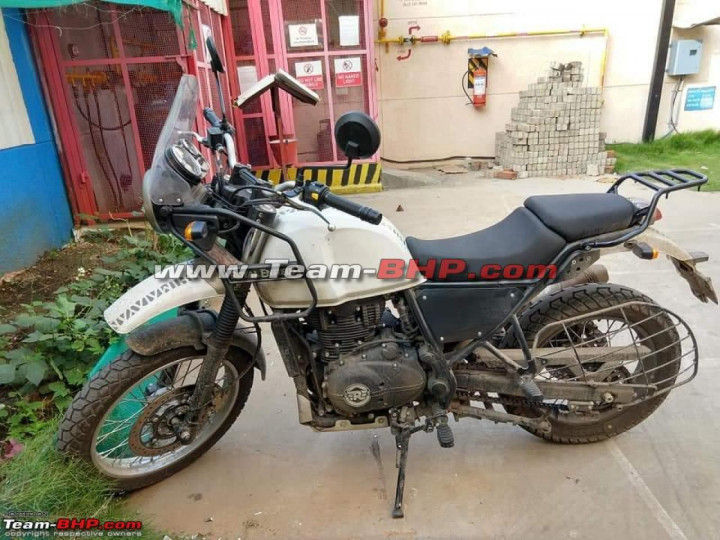 A test mule of what appears to be the BS6-compliant iteration of the Royal Enfield Himalayan has been spotted for the first time. Interestingly, the motorcycle has done away with the 21-inch spoke wheel setup up front in favour of a smaller wheel, which is likely to be a 19-incher. The rims appear to be aluminium and are shod with fatter MRF Meteor dual-purpose tyre, presumably a 100-section unit. The rear gets the new MRF Meteor rubber too, and is likely to be a 130-section unit instead of the current 120-section Ceat Gripp XL unit.

It remains to be seen how the dynamics of the bike might change with this new setup, and whether the aluminium rims will be able to take a beating off road like the existing steel units.

The dials on the instrument cluster get slightly different lettering and there’s one extra tell-tale light and a button on the console apart from the already-existing Mode and Set buttons. It is likely that this will be for the switchable ABS unit. The current-gen motorcycle’s ABS isn’t switchable, and if Royal Enfield indeed provides a switchable unit, it should be a whole lot more fun to ride on the dirt. What’s even more interesting is that the front disc is similar to the one in the upcoming 2020 Royal Enfield Classic 350 & the Thunderbird 350.

Features like the ambient temperature gauge, digital compass and other run-of-the-mill information like speed, odometer and tripmeter readouts are expected to be carried over. Also, the bike now gets a hazard lamp switch on the right switchgear too. Earlier, in the BS3-compliant models, the hazard lamp button was on the console and for some reason, Royal Enfield decided to remove it in the fuel-injected BS4-compliant model.

While the 411cc single-cylinder fuel-injected air-cooled engine with oil cooler looks the same externally, it will be BS6-compliant. Expect the output figures to go down slightly in favour of cleaner emissions. At present, the Himalayan makes 24.5PS at 6500rpm and 32Nm at 4250rpm. Apart from these changes, the upcoming motorcycle will remain the same as the existing one.

Expect Royal Enfield to launch the motorcycle early next year. As far as the price premium is concerned, it is likely to cost around Rs 9,000 over the current-gen bike, which retails at Rs 1,80,951 (ex-showroom Delhi). This is considering the fact that the engine will have to be tweaked to comply with BS6-emission norms and also the ECU tweak that’s required for a switchable ABS unit. The upcoming Royal Enfield Himalayan BS6 will be a more affordable alternative to the KTM 390 Adventure, which is likely to be launched early next year. Sure, you have the Hero XPulse 200 undercutting the Himalayan but as an overall adventure tourer, it is the Himalayan that has the upper hand.