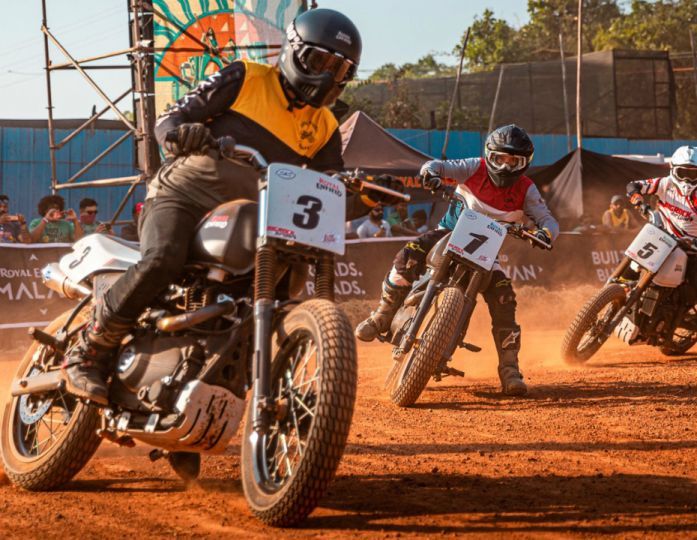 The motorcycling industry in India, the affordable side of things at least, just received a new genre - flat tracking. Thanks to Royal Enfield’s Slide School, enthusiasts will soon be able to learn the art of flat tracking, hopefully without breaking their bank. At the centre of it all lie five flat track-ready FT 411 custom-built Himalayans meant for one thing and one thing only - going sideways. There’s a lot that has been changed on the bike to suit this purpose, from new bodywork, tyres and wheels to a full exhaust system. Here’s to more sideways action and a number of pictures to make your day.

The FT 411s have been designed by S&S Cycles while the kits have been built by Pune’s Autologue Design.

The kit, which is made from fibre-reinforced plastic, bolts on to a stock Himalayan. The tank and the side panels have been retained. As for the stock seat, it’s been replaced with a thin layer of foam.

Goes without saying flat trackers have to be light, hence, all the unnecessary bits such as the headlight, turn indicators, mirrors and the front brake assembly have been scrapped.

The speedometer has been done away with as well, because going sideways requires more skill than pure straight line speed. Also, weight saving. The switchgear, on the contrary, has been retained.

Another crucial change on the FT 411 comes in the form of a  new set of wheels. Rather than the 21-/17-inch wire spoke setup on the standard Himalayan, the flat tracker features 18-inch spoke rims borrowed from the Interceptor 650 at both ends. The chunky dirt rubber, on the other hand, is provided by Timsun.

While the engine remains bone stock, it breathes and exhales better thanks to a K&N air filter and a unique S&S exhaust system. Its stainless steel headers were specially designed by Autologue Design.

A larger rear sprocket had been fitted to the FT 411 to get it to break traction and slide easily. The rear gets two extra teeth compared to the standard model, which theoretically should offer better bottom-end grunt.

The rear brake, monoshock and swingarm is the exact same setup as the standard model.

It took a total of 45 days for Autologue to build five FT 411s for Rider Mania 2019. Good news is, there are more in the pipeline.

Royal Enfield is using these kits are a marketing exercise and one of them will be shipped to Australia.

If you’re keen you could attend Royal Enfield’s flat track school, which will commence soon. The programme will be taken across India, starting off with Bengaluru at the Big Rock Dirtpark.