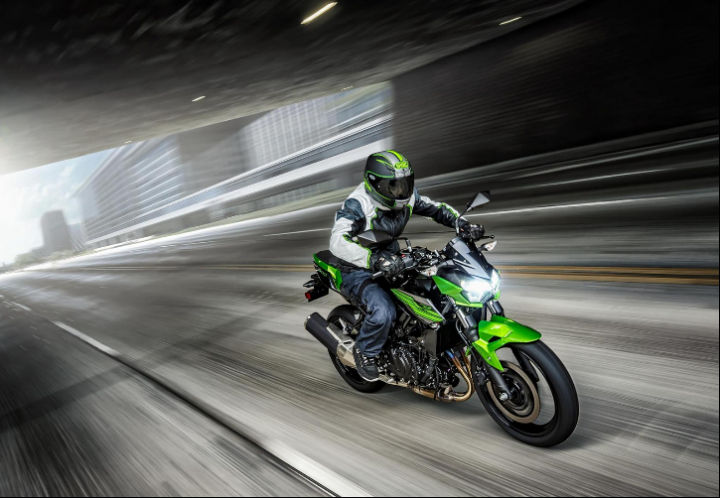 Just like it has done with its larger capacity bikes and more recently with its latest 125, Kawasaki has taken the wraps off the Z400. It has ditched the fairing and clip-ons bars for a more naked styling and stance, like its other siblings.

Like its naked ‘Z’ badged brothers, the Z400 is also styled on the animalistic Sugomi styling that Kawasaki so proudly boast about. The headlamp looks odd though and doesn't give that venomous vibe that perhaps its larger siblings do. What remains the same when it comes to the design elements are the tank and everything rearwards from it. And as much as we like the front end look of the Ninja 400, which mimics the H2 in certain aspects, the latter half just feels a typical Jap design and that continues to persist here on the Z400 as well.

The foundation of the bike remains the Ninja 400’s tubular steel trellis frame that is lighter and more rigid than the old 300’s. Kawasaki has been making use of trellis frames ever since the Ninja H2 and the benefits of that shift are clearly seen in their motorcycles’ dynamics.

Since the bike has been shown at EICMA and will go on sale in European markets initially, the 399cc parallel-twin motor adheres to the A2 license restrictions and makes 45PS of power. If Kawasaki does decide to get this to India, we will get the unrestricted version which generates 49PS. Torque remains the same at 38Nm.

There are no changes in terms of the rest of the cycle parts. Beefy 41mm conventional forks and a link-type preload-adjustable monoshock take care of suspension duties. Stopping duties are performed by a dual-piston calliper at both ends operating on a 310mm petal disc at the front and a 220mm petal disc at the rear. ABS will come as standard in India. Overall the weight has just gone down by a kilo from the Ninja as the Z 400 has a kerb weight of 167kg.

Kawasaki has shied away from bringing in naked motorcycles below 650cc to India after the Z250 not receiving any major attention from buyers. Also, one needs to consider the pricing at which the Z400 will retail at. The difference between the Z650 and the Ninja 650 is roughly fifty grand and if we are to keep the same price difference here, the Z400 would retail for Rs. 4.2 lakh, ex-showroom India. That still continues to be an overpriced proposition. Thus, it seems highly unlikely that we will get to see it on our streets anytime soon.