The 2021 S-Class’ Cabin Will Feature More Screens Than Your Local Multiplex! 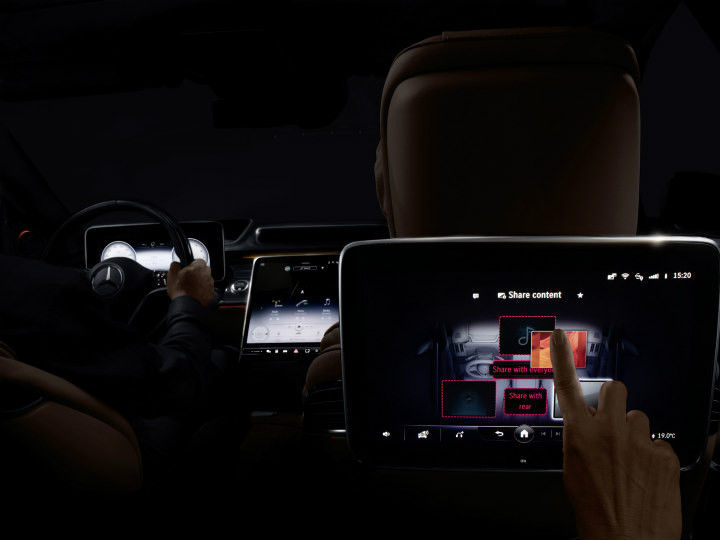 Mercedes-Benz has been preparing the next generation S-Class (W223) for a while now, with prototypes being spied testing. We already know what it looks like on the outside as well as on the inside thanks to numerous spy shots and leaked images. And now, the carmaker has revealed more on what to expect inside by showcasing its next-generation MBUX infotainment system.

As the images suggest, the interiors will have more digital bits which include up to three digital screens at the rear as well as the main touchscreen infotainment system in the centre and a new 3D view driver display. The main MBUX touchscreen infotainment system measures 12.8-inches with a variety of upgrades on offer. Some of them include an improved “Hey Mercedes” voice assistant with actions such as accepting a telephone call or displaying the navigation map without the activation keyword, point out the location of the first-aid kit as well as instructions on how to connect your smartphone via Bluetooth.

It also gets new authentication measures aside from a PIN entry. This includes fingerprint scans, face as well as voice recognition to grant access to personal settings as well as digital payment options. Mercedes says users will be able to create up to seven custom settings for the driver as well as occupants. These settings will be stored in the cloud and can be transferred to other Mercedes-Benz vehicles that use the next-gen MBUX infotainment system. Other feature highlights in the S-Class include a head-up display with Augmented Reality that works with the navigation system and according to Mercedes, this blends into the surroundings ahead of the vehicle, and can, therefore, contribute to further reduced distraction. The system also packs gesture control for opening and closing of the sunroof as well as operating the touchscreens.

The next-gen MBUX also networks with a wide range of vehicle systems and sensor data. Some examples include an exit warning function that now uses cameras to recognise an exit from the vehicle. Another example is the MBUX Interior Assist that can check whether the child seat is correctly attached to the front passenger seat and even keep an eye on the driver's attention via Attention Assist if there are signs of microsleep.

Expect the 2021 S-Class to be launched in India soon after its global debut that is slated for the second half of 2020. The all-electric EQS is also set to debut in 2021. Expect prices to start from Rs 1 crore in India. When launched, it will take on the likes of the BMW 7 Series in India.