The S-Class’ cabin now features a massive touchscreen and more 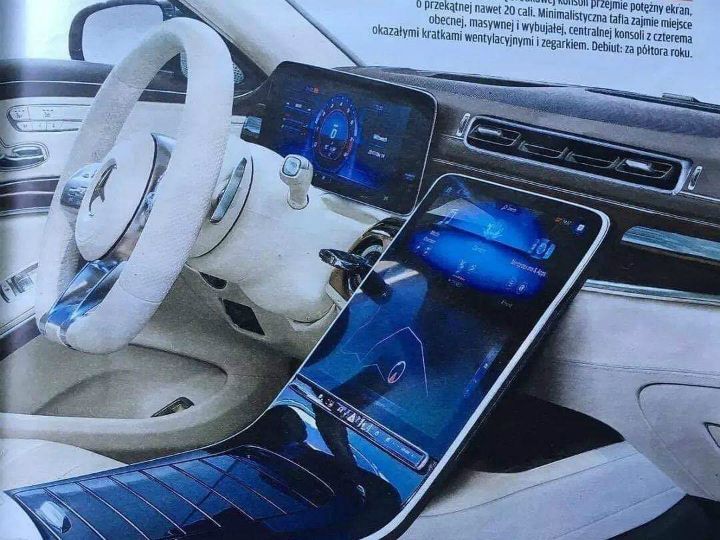 If you didn’t already know, Mercedes will be bringing the next generation version of its flagship sedan, the S-Class, in 2020. A few weeks ago, we got the first glimpses of the all new S-Class in heavy camouflage undergoing various tests in Germany. This time around though, spy shots of the uber luxurious sedan’s interiors have surfaced online and by the looks of it, they are quite drool worthy!

The interior of the seventh generation (W223) S-Class gets a brand new design language. Gone are the horizontal infotainment screen and the huge slab of wood trim that houses the AC vents and controls. Instead, the next-gen S-Class deploys a huge vertical touchscreen on the centre console, which is slowly becoming a trend on latest cars. The huge touchscreen will most likely give you access to almost all the features of the car, including the infotainment system, climate control, vehicle parameters, ambient lighting, and more.

The S-Class will also feature the latest MBUX system from Mercedes, which will link the all-digital driver’s display and the infotainment system. The MBUX system features functions like navigation with augmented reality and intelligent voice control, which is activated with the keyword “Hey Mercedes.” The MBUX system can also be personalised to suit the needs of a particular user.

Apart from the centre screen, the quad AC vents present in the centre console have been shifted up to the top of the dash to accommodate the massive screen. A three spoke steering wheel with touch pads can also be seen.

The interior of the S-Class was seen wearing a brown and beige dashboard. We also expect Mercedes to offer plenty of customisation options, including different colours, inlays and trims. Just like every other Mercedes-Benz before it, expect quality levels to be right there with the best.

The 2020 S-Class will be underpinned by an all-new platform. While the details of the platform aren’t out yet, we expect it to be similar to the MHA platform which allows plenty of engine and drivetrain options, including a hybrid and a souped up AMG variant. Yes, the ultra luxurious Maybach variant of the S-Class will also be available. The Maybach version of the S-Class will also feature the upgraded ‘Next Level Suspension’, which is an upgrade from the Mercedes’ ‘Magic Body Control’ suspension.

The S-Class will be unveiled globally in 2020 and is likely to make its way to India soon after. When launched here, the 2020 S-Class will get a slight bump up in prices when compared to the current model which is priced from Rs 1.36 crore for the S350D and goes up to Rs 3.02 crore for the top-end S63 AMG variant (both prices, ex-showroom Delhi). The Maybach, AMG and S-Guard variants of the next-gen S-Class are also expected at a later date. The S-Class’ rivals include the BMW 7 Series and the Audi A8. The Maybach version, on the other hand, takes on the Rolls Royce Ghost.