Sharper exteriors, autonomous driving tech, modern interiors, mild-hybrid engines and so much more to drool over! 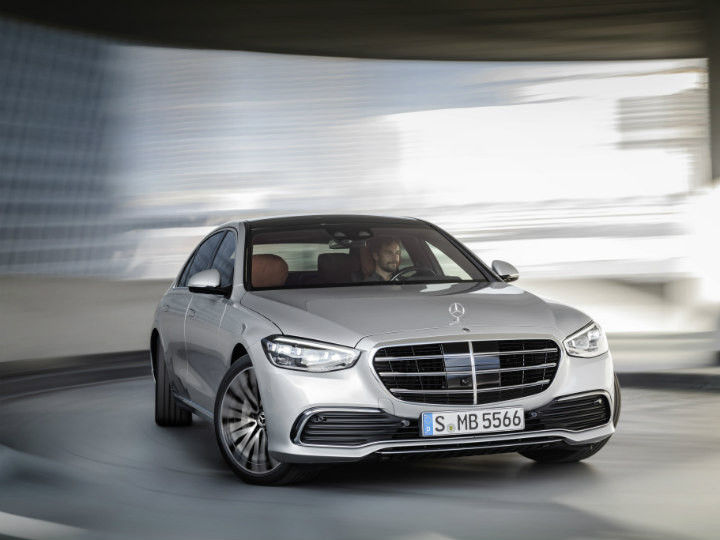 The long awaited next generation Mercedes-Benz S-Class has officially made its debut after an extensive period of teasers and spy shots. The latest luxury barge gets a comprehensive generational update with plenty of notable bits to drool over.

Dimensions aside, it sports the  familiar-looking grille and the tri-star ornament mounted on top of the hood, but is sharper than before with sleeker headlamps featuring Digital Light system that projects warning signals on the road like construction work, traffic signals and more. Other notable bits include flush fitting door handles, redesigned wheels in 18-inch to 21-inch sizes, a smoother C-pillar and a swanky set of horizontal wrap-around tail lights that feature a futuristic light pattern. It’s also one of the most aerodynamically efficient cars around with a drag coefficient of 0.22.

Heading inside, the new S-Class is worlds apart from its predecessor, ditching the old-school cabin layout for a digitally loaded cabin with up to three digital screens at the rear, a 12.8-inch main touchscreen infotainment system in the centre with the latest MBUX user interface, and a new 3D view driver display. The new MBUX system can store upto seven custom settings for the driver as well as occupants in the cloud. These can also be transferred to other Mercedes-Benz vehicles that use the next-gen MBUX infotainment system.

Another nifty bit is Energising Comfort Control which suggests an appropriate fitness programme based on your sleep patterns, stress levels and age via analysis data from either a smartphone or a fitness band.

Other notable features include adaptable ambient lighting that also works with the blind-spot assist to warn of a collision, a three-spoke steering wheel with touch controls, a head-up display with augmented reality that works with the navigation system, as well as gesture controls for opening and closing of the sunroof as well as operating the touchscreens.

Under the hood, the new S-Class is powered by 3.0-litre inline-six petrol and diesel engines with  a 48-volt mild-hybrid system for the petrol engines. The petrol mill comes in two states of tune at 367PS/500Nm and 435PS/520Nm, whereas the diesel mill comes in 286PS/600Nm and 330PS/700Nm. The fastest S-Class variant goes from 0-100kmph in 4.9 seconds, with all variants achieving a top-speed of 250kmph. The petrol engine can also get an extra 21PS burst of power via EQ boost. A V8 variant, a plug-in-hybrid powertrain capable of a range upto 100km will join the lineup soon. Also expect spicier AMG versions, the ultra-luxurious Maybach edition and its all-electric sibling, the 700km range EQS, to join the lineup at a later stage.

Powertrains aside, the new S-Class has some nifty performance trickery like air suspension with active hydraulic damping as well as E-Active Body Control. This system adapts the ride height according to the selected driving mode. It also acts as a safety measure by raising the ride height by 80mm in the event of a side-impact crash. It also gets four-link suspension up front and a multi-link independent rear suspension with rear-wheel steering.

Rounding off the plethora of features of the new S-Class is the Level 3 autonomous driving tech. The carmaker also claims that by the second half of 2021, it’ll be able to drive entirely on its own in certain areas in Germany. Another autonomous feature is Automatic Valet Parking in which you can pretty much park or unpark the car via your smartphone with remote parking assist.