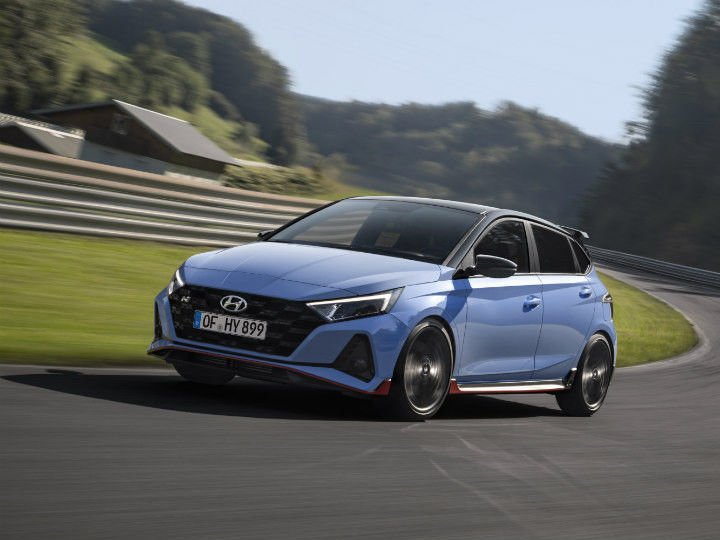 Barely a month ago, Hyundai introduced the 2020 i20 hatchback to the performance-focused ‘N’ range with the i20 N Line. But the updates were mostly cosmetic, which didn’t exactly give an N-branded vibe. Well, the carmaker has now unleashed the full-fledged i20 N hot hatchback and the updates clearly blow its tamer and standard siblings worthy of the N brand out of the water.

For starters, the i20 N sports the traditional eye-catching Performance Blue body shade with dashes of Tomato Red accents on the front lip spoiler, side skirts and rear bumper. Notable highlights include a chequered flag-inspired cascading grille, larger air intakes, a bespoke set of 18-inch alloy wheels, N-branded brake calipers, dark tail lights, a new rear bumper with diffuser, and a WRC-inspired roof spoiler to round off the spicier exterior.

Heading inside, the i20 N receives an even sportier cabin than the N Line. It features black upholstery with blue accents, dedicated sports seats with integrated headrest, a spicier steering wheel, a bespoke gear knob and metal pedals. Another notable change is the N-branded driver’s display featuring a variable LED red zone that varies as per the engine oil temperature and shift-timing indicator, to aid in optimal gear shift times. It continues to offer the latest version of Hyundai’s BlueLink connected car technology, SmartSense technology, a 10.25-inch touchscreen infotainment system, ambient lighting, and wireless charging.

The biggest change, of course, is under the hood. The hot hatch is powered by a 1.6-litre turbocharged engine that pushes out 204PS of grunt and 275Nm of torque. That’s 84PS more than the standard model’s 1.0-litre turbocharged mill. What’s more, it is paired exclusively to a 6-speed manual transmission which is another plus point for purists. All this gives the i20 N a 0-100kmph sprint time of 6.7 seconds and a top speed of 230kmph.

Power aside, there’s some technical wizardry in the form of launch control, mechanical limited-slip differential, rev-matching as well as five drive modes: Normal, Eco, Sport, N and N Custom. Hyundai has also tweaked the chassis for better handling with new suspension joints, springs and shock absorbers.  The brakes have also received an upgrade with the front disc 40mm larger than the standard i20. Rounding off the changes, the hatchback sits 10mm closer to the ground.

The i20 N will go on sale in Europe by 2021. Back home, Hyundai is unlikely to bring either the N Line or the full-fledged N iteration of the 2020 i20, but we do know that the standard model is slated to launch in the first week of November. In fact, it has already started reaching dealerships and a select few have even commenced unofficial pre-launch bookings. Expect the third-gen i20 to be priced from around the Rs 6 lakh mark (ex-showroom). It will go up against the Tata Altroz, Honda Jazz, Maruti Suzuki Baleno, and the Toyota Glanza.