Ford EcoSport, with the Thunder edition, will better rival the Hyundai Venue. It will get various cosmetic updates and a possible price cut 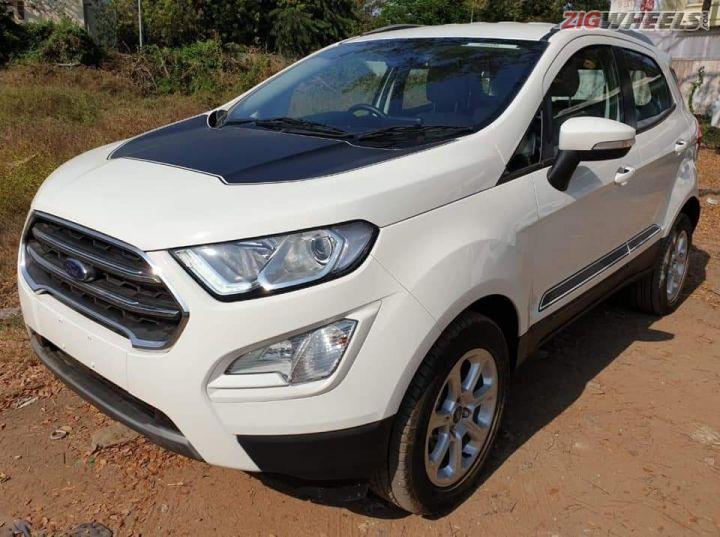 The Ford EcoSport is set to receive a cosmetic update next week. Based on images shot at a dealer yard, we now know that the special edition version of the popular sub-4 metre SUV will be called the EcoSport Thunder edition. It packs various cosmetic changes both inside and outside the car. Multiple variants of the SUV can be seen in the images, with black graphics on the bonnet, sides and at the rear. On the inside, major changes include a new beige leather upholstery and a dual-tone dashboard. Also, our sources suggest that the Thunder edition will be priced about Rs 20,000 lower than its corresponding variant at the cost of a few features.

From the outside, the Titanium Plus variant has been spotted with black decals that will remain common on all variants. But, what does not immediately stand out are the new 7-spoke alloy wheels which get the same silver finish as the current set of wheels. At the rear, there is a larger roof-mounted spoiler as well. In the S variant, however, it is hard to comment whether the wheels are all-new or not. However, they will retain the darker gunmetal finish as the current car. The S variant will continue to get black surrounds around the fog lamps, blacked out ORVMs and a black roof.

Inside, the changes are more noticeable. The Titanium Plus variant now wears a beige leather upholstery. Complimenting this is a new dual-tone dashboard and door pads with faux wooden elements, which now makes the cabin look more luxurious. This is a big move from the all-black interior which has been a signature of the EcoSport. The interiors of the S variant will get an orange-black leather combo with contrast stitching. The steering wheel is also expected to feature new cosmetic elements. Meanwhile, the lower variants will receive beige fabric upholstery and a dual-tone dashboard.

With the Thunder edition of the EcoSport likely to be priced lower than regular variants, it will better rival the Hyundai Venue, which was launched yesterday with an aggressive price tag. The EcoSport Thunder edition will arrive at Ford showrooms later this week and is expected to be launched before the end of the month. The EcoSport is currently priced from Rs 7.83 lakh to Rs 11.9 lakh (ex-showroom, Delhi) for the top-spec S diesel variant. Would you consider these cosmetic upgrades at the cost of some features or prefer to pay the full price for the complete package? Let us know in the comments below.