Hyundai is venturing into the sub-4 metre SUV segment with the Venue. We find out if it can create a rift in the segment. Here is how it stacks up next to its major rivals on paper: 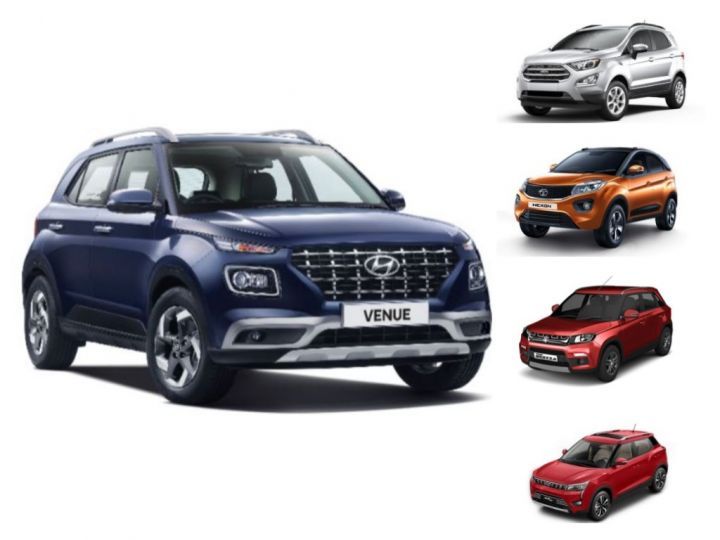 Hyundai has launched the much-awaited sub-compact SUV, the Venue. Loaded to the brim with features, it’s the first made-in-India ‘Connected’ SUV and is all set to take on the competition. The Venue is priced between Rs 6.50 lakh and Rs 11.11 lakh (ex-showroom), the Venue competes with the Mahindra XUV300, Maruti Suzuki Vitara Brezza, Ford Ecosport and Tata Nexon. So let’s dive into the spec sheet first and find out where it stands viz-a-viz its main rivals.

Will it be easy on the Pocket?

Hyundai has priced the Venue from Rs 6.50 lakh to Rs 11.11 lakh (ex-showroom India), which is the cheapest in the competition. While the Tata Nexon grabs the second title of being the most aggressively priced sub-four metre SUV in the country, Mahindra’s XUV300 is at the opposite end of the price spectrum. The current segment leader, the Vitara Brezza, gets full marks for competitiveness.

A simple answer to that is no. It’s not the biggest, tallest or the most spacious SUV in its segment, on paper at least. But Hyundai has got the basics right with the Venue. All these SUVs have more or less similar dimensions; however at closer inspection, the picture gets much clearer. The Venue is as long as the Vitara Brezza and the XUV300 but is behind the Ecosport, which is the longest of the lot. When it comes to width, the Venue edges past the Ecosport but is behind the others, with the XUV300 taking the crown here. As for height, the Venue is the shortest among its competition by a discernible margin, with the Ecosport being the tallest. The Hyundai Venue and the Maruti Vitara Brezza have the same wheelbase as well, with the XUV300 scoring brownie points for being the segment leader on this metric.

The Venue doesn't bring any surprise to the table with respect to engine performance, in terms of sheer numbers on paper. However, what it brings with it is a swanky 1.0-litre turbo petrol engine mated with a 7-speed DCT gearbox developed by Hyundai in-house. While we will reserve all opinions till we take it for a spin, we do see a formidable foe for the award-winning 1.0-litre Ecoboost unit in the EcoSport. On the spec sheet, the Venue’s 1.0-litre Kappa T-GDI comes a close second behind the Ford Ecosport, which makes the most power. Even the naturally aspirated 1.5-litre dragon engine of the EcoSport tops the charts when it comes to peak power. The Mahindra XUV300 is the torquiest among the bunch with nearly 30Nm more than what the competition has to offer, followed closely by the upcoming Venue. The Venue’s 1.2-litre engine lags way behind its competition in terms of power and torque, but is likely to be more frugal. Apart from the DCT (only available on the Venue), Hyundai is also offering the option of a 5-speed manual on the 1.2-litre petrol and a 6-speed manual on the turbocharged variant. The Tata Nexon is the only one to get an AMT gearbox, while the XUV300 makes do with a 6-speed manual.

The Venue uses the same 1.4-litre diesel motor (likely from the Elite i20) that is good for 90PS and 220Nm of torque, a figure which is low in terms of the competition. As you can see from the table, the XUV300 trumps the other here as well, with a healthy 115PS/300Nm. The Venue also misses out on an automatic diesel variant, which the Brezza and the Nexon offer with their own AMT variants. Efficiency figures of the Venue are also solid, with Venue having the most frugal petrol engines, while the diesel's efficiency is along the similar lines of the competition.

The Mahindra XUV300, the reigning champion when it comes to features, will have to take a back seat now as the Venue is leagues ahead of the competition here. The features list, as you can see, goes on and on, with many segment-firsts to boast about.

Hyundai is offering the only DCT transmission in the segment. There are also some nifty features like an air purifier, a wireless charger, projector fog lamps, wheel air curtains, and an Arkamys sound system. The XUV300 also comes with some segment-first features like multi-mode steering, heated ORVMs and dual zone auto AC. But what Hyundai is really betting big on is the connected quotient of the Venue, called Blue Link.

The Hyundai Blue Link connected car technology is a segment-first feature that works with an embedded SIM card and utilises a network connection from Vodafone Idea. It essentially helps you keep a track on various parameters of the Venue with a total of 33 features, out of which 10 are India-specific according to Hyundai. Here is a brief look at the key features of the Blue Link.

The sub-4 metre space is the most happening segment in India right now, with every manufacturer wanting a slice of the pie. Competition is very tight and there is an option from every major carmaker here. Amid this, the latest offering from Hyundai does come with the promise of disrupting the segment with its long list of features and multiple engine options.

On paper, the segment leader Vitara Brezza gets a frugal diesel engine with an AMT transmission. The Nexon is the most aggressively priced in the bunch. The EcoSport looks the sportiest of the lot with Ford’s dynamics to back it along with the most powerful petrol engines. Meanwhile, the Mahindra XUV300 has the torquiest engines on offer with the most powerful diesel motor as well.

Hyundai, meanwhile, is playing the feature card with the Venue by offering goodies that are novel to this segment and even a segment above. The Venue also comes with a choice of three engines and three gearboxes, making a strong case for itself. Hyundai has priced it right it right and we now have on our hands a promising rival to the top-selling Vitara Brezza.

We will get to drive the Venue soon, so stay tuned for a through review and a real-world comparison to find out which comes out on top.