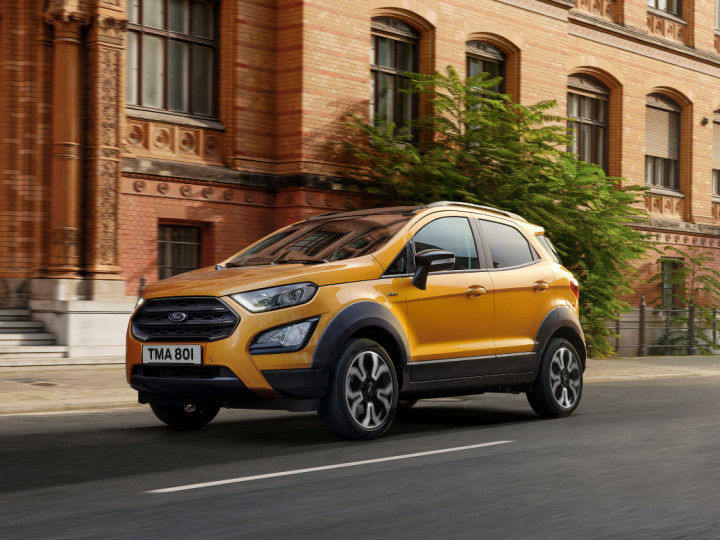 Ford’s subcompact SUV, the EcoSport, has received a rugged-looking Active variant in Europe. It gets a host of cosmetic additions inside and out to denote its tough intentions, however, almost no changes have been made underneath its skin.

The EcoSport Active gets off-road centric design updates such as body cladding around the wheel arches and doors. Active badges on the exterior denote it’s the rugged-looking EcoSport. But a point to note is that the Euro-spec EcoSport doesn’t feature a spare wheel on the tailgate, like the India-spec model.

While it might look more hatchback rather than SUV in Europe, the Active variant’s slightly jacked up ride height makes its intentions clear as an SUV. However, no changes have been made under the hood. It comes with a 125PS 1.0-litre EcoBoost petrol engine and a 95PS 1.5-litre TDCi diesel engine in Europe. Both engines are offered with a 5-speed manual gearbox.

What also remains similar to the standard EcoSport are the interiors. The only update is the Active badging on the seats. It continues to feature an 8-inch infotainment system with Apple CarPlay and Android Auto, climate control, cruise control, a sunroof, auto headlamps, a multi-info display, Ford Pass connected car tech, and keyless entry with push-button start. Safety is covered by six airbags, ABS with EBD, rear parking sensors, and traction control.

The Ford EcoSport in India is one of the oldest models in the segment, but it still sells in decent numbers. The addition of an Active variant with rugged styling could give it a breath of fresh air, but it’s yet to be determined if Ford will launch it in India. It has started working on the next-gen EcoSport that will be revealed in a couple of years. Images have been leaked and you can take a look by clicking here.