How does CFMoto’s middleweight naked stack up against its well-established foes? Here’s what the specs say 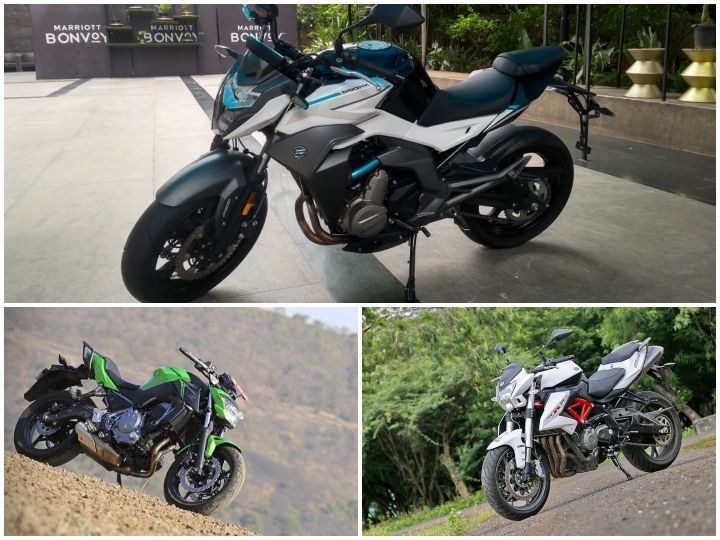 CFMoto has launched its 650NK middleweight naked at a fantastic price of Rs 3.99 lakh (ex-showroom). At this price, it is the third most affordable 650cc parallel-twin bike you can buy (the most affordable being the Royal Enfield Interceptor 650 and Continental GT 650). However given its specifications, the CFMoto 650NK competes with the Kawasaki Z650 and Benelli TNT 600i. Here is an on-paper comparison of the three.

The Benelli is not as quick as the other two. It is heavy and its inline-four power characteristics mean that power delivery is linear and throughout the rev range. And it is not as free-revving as the Kawasaki Z650. Crawling in traffic is a pain on the TNT 600i due to the heat radiated from its motor. However, being the only four-cylinder bike in this group, the Benelli does offer a sweet soundtrack.

The Z650 offers fantastic initial acceleration owing to its lower kerb weight. Its parallel-twin motor is refined and loves to rev. It is also quite tractable in city riding conditions. You could even enjoy it on the highway, the engine showing no signs of strain of sustaining speeds in the region of 120kmph. However, there’s no fairing to protect you from wind blasts, like its Ninja counterpart. While we haven't ridden the CFMoto 650NK, we expect it to be slower than the Kawasaki since it makes less power and weighs 16kg more.

The TNT 600i is the largest bike here and has good road presence. It might seem that it is easy to get on to the saddle of this bike given its low seat height, but the wide tank section means shorter riders will have a bit of trouble flat-footing this bike. The Z650 is very easy to ride and also has the most accessible seat. It is compact for a 650cc naked, relatively light and hence will be easy to maneuver in slow speeds or while parking. Its short wheelbase and low weight also make it agile and more fun around corners than the Benelli. In the city, the Z650 feels as easy to ride as a 200cc bike and that is its biggest USP. While we have yet to ride the CFMoto, we reckon that tall seat height will take some getting used to. The larger 17-litre fuel tank should mean fewer stops than the other two to the fuel pump.

The Kawasaki Z650 feels agile in the city and offers good ride quality as well. It corners well and has a surefooted handling. Owing to its weight and the chunkier rear tyre, the Benelli feels lazy in corners and takes some effort to change direction. We can not comment on the CFMoto 650NK’s handling since we haven’t ridden it yet.

All three bikes here are being brought to India via the CKD route. The Benelli is the most expensive here partly due to its four-cylinder engine configuration. But it is still the most cost effective way to own an inline four cylinder motorcycle in India. It stands out from the crowd thanks to its large dimensions and twin underseat exhaust that emit a sweet inline-four exhaust note. The Kawasaki might be lacking two cylinders compared to the Benelli but it is quicker off the line and more dynamic of the two. It impresses with its quality and refinement levels as well and is an easier bike to live with. Now CFMoto has pulled off a shocker with its Rs 3.99 lakh introductory price that undercuts the Kawasaki and Benelli by a massive 1.7 lakh and 2.21 lakh respectively. Of the three, the 650NK has more modern features like LED lighting. The sweet pricing is too tempting to ignore. We will be riding the 650 NK soon to get you a real-world perspective, so stay tuned.