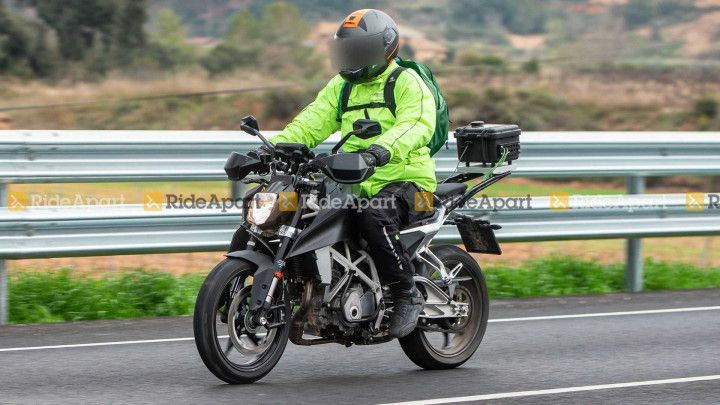 The second-gen Dukes have been around for four years now. If you look at KTM’s track record, it's bound to roll out an update pretty soon. The company has been labouring away behind the scenes to update its entire model range. We’ve already seen the RC range receiving its most comprehensive update yet and from the looks of it, KTM’s Duke range will follow suit pretty soon. We say this because the 2022 KTM 125 Duke and 250 Duke have been spotted testing overseas. More importantly, they look nothing like the current-gen models, apart from, of course, KTM’s aggressive design language.

First, let's look at the overall styling of the 250 Duke. KTM’s new design language takes styling cues from both the 890 Duke and the 1290 SuperDuke R. The front fender and the knife-like tank extension seem to be inspired by the 1290. The fuel tank, on the other hand, is styled like the 890. There’s a lot more to the new 250 Duke than meets the eye.

For instance, the fuel tank appears larger than before, perhaps to improve fuel capacity -- an area that’s always been an issue with the smaller Dukes. Then there are the radiator covers, handguards and a shorter rear fender, all of which are new. Even the cast swingarm has been redesigned and could be a tad lighter than before. Other minor but crucial design updates include a sleeker LED tail lamp and new rearview mirrors. What's a bit surprising is that KTM is backtracking on features, as the current 250 gets LEDs, while this one is running with halogens.

And that’s just the tip of the iceberg. The 250 Duke’s hardware has received some significant updates as well. For starters, the trellis sub-frame has been replaced by a sleeker composite unit which makes room for a new side-mounted monoshock. The 5-spoke alloys are the same units from the RC range, which should help shave some weight. It’s a similar case with the new swingarm.

KTM has also backtracked to using an underbelly exhaust -- reasons for which are currently unknown. What can be explained is the new engine casing which may have been revised to accommodate better internals in order to extract more performance. So we could expect a minor bump in power and torque, compared to the current-gen model which puts out 29.91PS and 24Nm.

So it’s safe to say the folks from KISKA have left no stone unturned. The upcoming 250 Duke isn’t just a nip and tuck job, but an all-new bike.

However, the same cannot be said about the 125 Duke. While it does sport a couple of updates for 2022, it isn’t as comprehensive as the 250. The two-piece frame configuration is the same, but the trellis arrangement is noticeably different on the test bike.

The additional cross beams on the chassis may offer more rigidity. The sub-frame too looks much longer than the current version. The revised engine hanger and the swingarm design are the same as the 250 Duke. As for the rear fender, it looks as if it’s been taken from the 890 Duke. Unfortunately, the 125 Duke test mule isn't carrying any bodywork so it's tough to say what the production version would look like.

Expect KTM to unveil both the bikes early next year with an expected launch timeline of mid-2022.