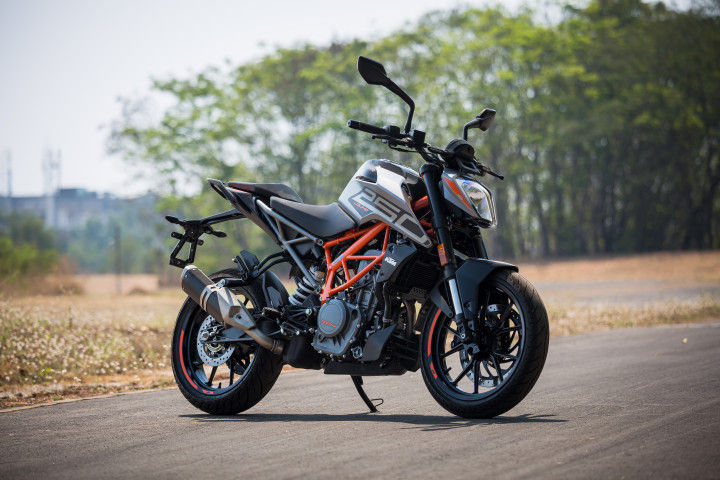 KTM has updated its entire lineup barring the 790 Duke to meet the upcoming BS6 emission norms. We have already covered what’s different between the new and old 390 Duke and the 200 Duke. But after taking a closer look at the spec sheet, we’ve learnt that even the 250 Duke has received some updates other than just a new paint scheme.

The major difference between the new bike and its predecessor is the braking hardware. The BS6 250 Duke now comes with Supermoto mode and a bigger 320mm disc at the front, just like the 390 Duke. Will it help in better braking performance? We certainly think so. But we will get more clarity on this once we get the motorcycle for a proper road test.

Just like the new 390 Duke, the exhaust end can on the new 250 Duke now lies underneath the bike instead of the side as seen on the previous model. This has led to a drop in ground clearance from 175mm to 151mm. To compensate for this, KTM has equipped a small bash plate, but if we were you, we would be extra cautious now.

It has gained some weight:

At 169kg, the new 250 Duke is 3kg heavier than before, which is normal considering the changes that KTM has done to the exhaust system.

The 248.8cc motor has been slightly updated, but it continues to produce the same power and torque figures as before (30PS and 24Nm). And considering that the weight hasn’t gone up that significantly, we expect the performance numbers to be similar to the BS4 model. There’s no change in the suspension hardware as well.

Apart from new paint options, there’s nothing to report here. However, we think KTM has nailed the colour schemes for the BS6-compliant motorcycles. Be it the 250 Duke or the 390 Duke, or even the RC range for that matter, each one looks absolutely stunning!