Brace Yourselves, The Ducati Multistrada V4 and Streetfighter Are Coming!

Pre-bookings have opened across select dealerships 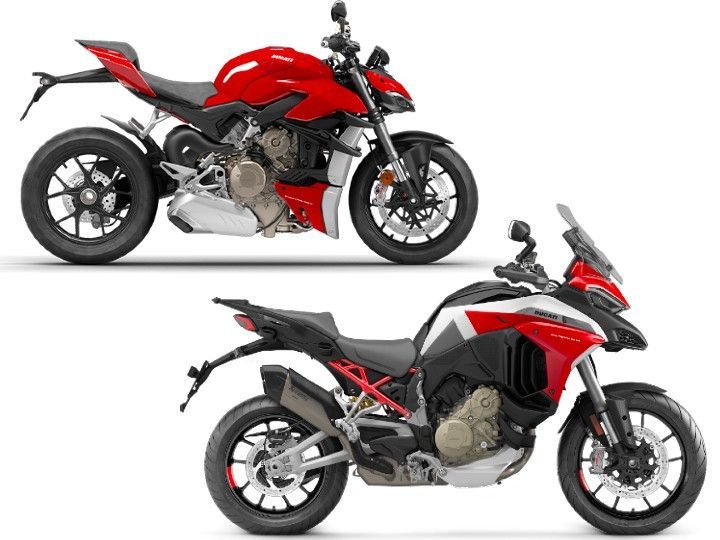 Ducati has a long lineup planned for India in 2021 and it looks like the brand is finally stepping on the gas. After launching the BS6 Scramblers and the Panigale V2, the Italian bikemaker has opened pre-bookings for its flagship ADV, the Multistrada V4, and its flagship naked offering, the Streetfighter V4. Both bikes can be booked for a token amount of Rs 2 lakh (refundable).

As many cities in India are under lockdown, select dealerships are only accepting bookings via online transactions. The Streetfighter V4 is scheduled to launch in May/June, while the Multi V4 could arrive later around June/August. Let’s hope the COVID crisis doesn’t play spoilsport for Ducati India.

The Streetfighter V4 is Ducati’s flagship naked offering, featuring the same motor as the bonkers Panigale V4. It makes 208PS and 123Nm. It tips the scale at just 201kg (wet). Sounds pretty hard to tame, right? Luckily, it comes with an extensive electronics suite including cornering ABS, wheelie control, traction control, rider modes, and engine braking control -- all accessible through a TFT display. Not to forget this also gets wings!

The Streetfighter will be offered here in two trims: Standard and S, priced around Rs 23 lakh and Rs 25 lakh, respectively. For the extra cash, the S offers electronic Ohlins suspension as compared to the Showa front fork and Sach rear unit on the standard trim. It also comes with forged Marchesini alloys, making it 2kg lighter. The naked had received a few subtle updates for Euro-5. Check them out in our story.

Coming to the Multistrada V4, it bids adieu to its L-twin legacy and finally switches to four cylinders this time around. It is powered by an all-new 1,158cc V4 Grantourismo engine churning out 170PS and 125Nm. An electronics suite similar to the Streetfighter is also present here. One of the major talking points of the 2021 Multi remains its radar-guided cruise control system, which will be a first for our market.

It will be available in three trims: Standard, S, and S Sport. In addition to the standard kit, the S gets hill hold control, Marzocchi Skyhook suspension, a bigger 6.5-inch TFT, quickshifter, Brembo Stylema calipers, and Ducati’s smartphone connectivity features. The S Sport is further upgraded with a “sport livery,” an Akrapovic can, and a carbon-fibre mudguard. The Multi V4 lineup is expected to be priced from Rs 20 lakh.