The KTM RC duo is now lighter and faster 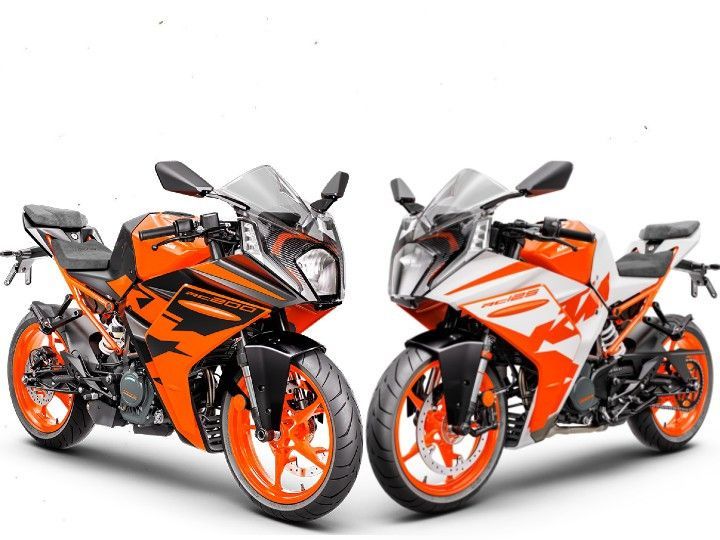 After months of speculations, leaks and spy shots, KTM has finally pulled the wraps off its supersport trio. This is the first comprehensive update that the bikes have received since their global debut in 2013. While the 2022 KTM RC 390 now gains a bunch of electronic aids, the small siblings-- the KTM RC 200 and the KTM RC 125 too aren’t far behind.

Engine
KTM has used the same 124.7cc and 199.5cc liquid-cooled single-cylinder engines from the outgoing models for the RC 125 and the RC 200 respectively. However, the engines have been heavily revised to deliver more performance and make the bikes bolt off the line quickly.

The engines now get carbon-coated cam levers which have lower friction and produce more power. Furthermore, the piston is now cooled using a nozzle that directly sprays on the head, which should result in longer life and smoother acceleration. We have seen this technology being used by Honda two-wheelers recently.

KTM has even equipped the duo with a 40 percent bigger airbox and paired with the new engine mapping, the RC 125 and the RC 200 will have crisper throttle response.

Another big change comes in the form of a bigger 13.7-litre fuel tank, replacing the puny 9.5-litre unit on the outgoing model.

Underpinnings
The highlight of the 2022 KTM RC 200 and the KTM RC 125 are the updated underpinnings. KTM’s penchant for shaving off weight and chasing insane power-to-weight ratio figures is no secret. With the 2022 KTM RC range, the bikemaker has achieved just that.

The updated trellis frame on the KTM RC duo features a bolt-on subframe and is now lighter by 1.5kg. This frame sits on a WP Apex big piston fork and a WP Apex monoshock, both of which are now slightly reworked to offer a sportier ride.

The new five-spoke alloy wheels are lighter by over 3.4kg, achieved by using open hubs and fewer spokes. With such reduction in the unsprung mass, the handling is likely to see considerable difference.

Further adding to weight savings is the new braking system. Instead of the current 300mm/230mm setup, the bikes now feature a 320mm disc up front while the rear disc diameter remains unchanged. In spite of having a bigger disc, the new components are lighter by 960gms.

Ergonomics
The 2022 KTM RC siblings feature slightly relaxed ergonomics compared to the outgoing model. KTM has achieved this by using a new pair of clip-on handlebars which are set 15mm higher. That said, the handlebar can be lowered by 10mm for a track-oriented riding posture.

KTM has even reworked the seat, using a new material and profile for rider movement. However, at 824mm, the seat height is 4mm more than the outgoing model.

Though KTM hasn’t revealed if the footpegs have been moved, the design is new, and the company claims it is lighter and optimised for sporty riding. KTM has even upgraded the footlevers with a new, foldable design that won’t break away in case of a crash, something we have often seen (and experienced) on the current KTMs.

Features
While the international-spec 2022 KTM RC 125 features the TFT console from the RC 390, the Indian model may not get it. Instead, we may get the LCD unit seen on the 2022 KTM RC 200 and the 250 Adventure. This is a welcome change from the dated orange-backlit digital console.

Styling
Thanks to the leaked images, we already knew what the new RC 200 and the RC 125 look like. The Austrian manufacturer has altered every bit of the bike, in an effort to improve the aerodynamics as well as rider comfort. KTM also claims that the new fairing design will direct the engine heat away from the rider.

The international-spec 2022 KTM RC 125 has been equipped with LED headlight, however, the India-spec bike is likely to get the same halogen unit seen on the 2022 KTM RC 200.

The 2022 KTM RC 125 and the 2022 KTM RC 200 could demand a premium over the current models owing to the plethora of changes these bikes pack. While there is no word on the India debut, the bikes will hit the foreign markets March 2022 onwards.