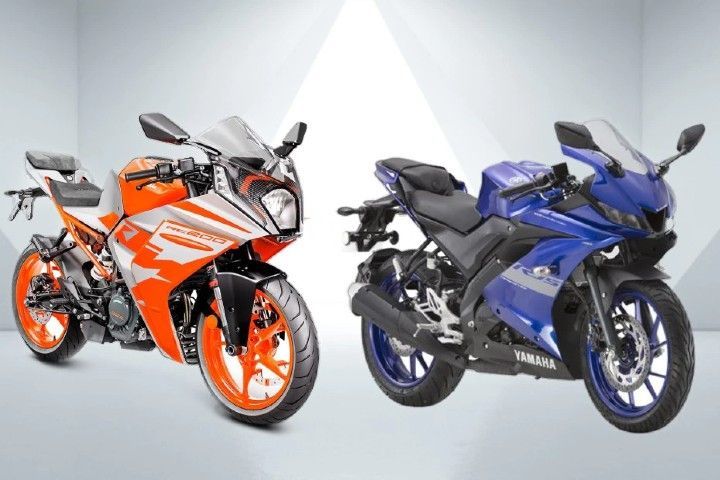 After numerous spy shots and leaked images, the new KTM RC 200 finally broke cover yesterday. It has received a laundry list of updates and aims to be even more competitive now. But, does it pack enough to have an edge over the Yamaha YZF R15? Let’s find out.

KTM has given the RC 200 a major cosmetic overhaul with the fascia being completely revised. It now sports an LED headlight and DRLs instead of the horizontally stacked projector lamps. The R15 V3’s fascia looks comparatively aggressive and more proportionate to the overall structure. It houses split LED headlights.

For 2021, the RC 200 gets a large LCD cluster which seems to be borrowed from the KTM 250 Adventure. The Yammie too uses an LCD console.

Even the frame for the new RC 200 has been changed. The bike now gets a trellis frame with a bolt-on subframe, which is easier and affordable to replace in case of a crash. The Yamaha YZF R15 V3 uses a delta-box frame.

KTM has suspended the RC 200 on a USD fork and a monoshock setup, whereas the R15 is equipped with a conventional fork and a linked-type monoshock.

Braking hardware for the Austrian supersport consists of a 320mm front and 230mm rear disc with dual-channel ABS. The Yamaha R15 uses a 282mm front disc and 220mm rear unit with single-channel ABS.

The RC 200 rolls on 17-inch alloys which weigh 960gms less than before and are covered in Continental ContiRoad sport-touring tyres. The YZF-R15 on the other hand gets 17-inch wheels wrapped in MRF rubber,

Even the fuel tank capacity for the 2022 KTM RC 200 has gone from 9.5-litre to 13.7-litre. Meanwhile, the Japanese supersport uses a smaller 11-litre fuel tank.