It features a reworked chassis, swingarm, and a new tail light 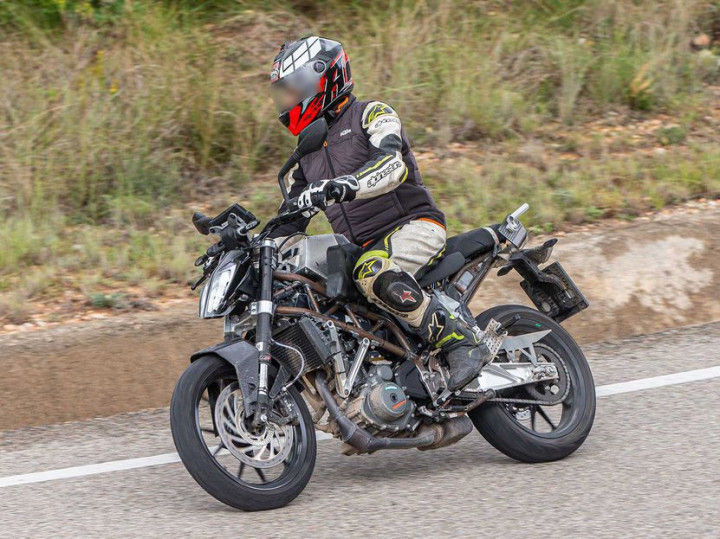 The 2020 390 Duke was spotted for the first time in April 2019. While the bike was still in its prototype form, it gave us some key insights into most of the updates that have gone into the bike. It’s been a couple of months since then and we hadn’t seen or heard anything about the upcoming streetfighter. Until now, that is. The bike has been spotted once again and looks a smidge closer to making it to its final production form.

For instance, the 2020 390 Duke features a reworked chassis and a swingarm that looks more premium than before. It’s also likely to get an updated suspension setup that may have some form of adjustability, just like the 390 Adventure. Though the split seats still look crude, they seem to feature more padding for better comfort. The bare metal fuel tank is more visible from this angle and looks larger than the one on the current model.

The rest of the bike remains identical to the test mule spotted last year.  The rear fender now incorporates the tail light. Additional features may include cornering ABS, which could render the 390 Duke the most affordable bike in KTM’s portfolio to get one. The motor will be tweaked to comply with Euro 5/BS6 regulations, which could affect its performance a bit. For reference, the current-gen KTM makes 43.5PS and 37Nm.

So when could you expect to see the updated KTM 390 Duke? Not anytime soon to be honest. Considering the updates, we expect the new 390 Duke to be unveiled at 2020 EICMA. That means the streetfighter could make its India debut only in 2021.

The Austrian brand is also working on a 490cc platform that will spawn five new bikes. One of these could be an all-new 490 Duke. Chances are that the motor that’ll be used to power these machines will be a bored in version of the 790’s parallel-twin motor. So we could expect new levels of sophistication and refinement.