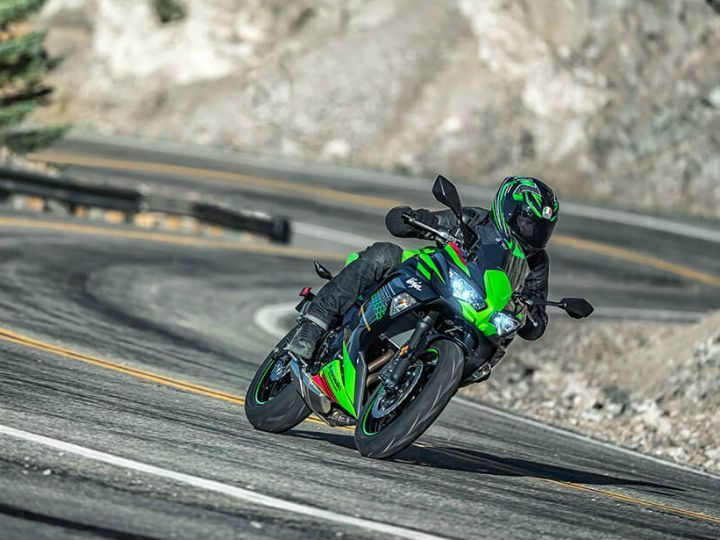 Kawasaki’s 650 range has been a great entry point for large displacement motorcycles in India, offering a choice between a sports tourer, an adventure tourer, a cruiser and a naked. The sports tourer in question is the Ninja 650. Being a good all-rounder, it has become one of Kawasaki’s most popular performance bikes in India. The bike has now been updated for 2020, so let’s take a look at what’s new.

The most obvious difference is in its appearance, with the updated bike now falling in line with Kawasaki’s new design language that kicked off with the Ninja 400. The fairing has been redesigned and now houses a taller, narrower screen. The addition of twin-LED headlights ensures that the new Ninja 650 looks like its recently updated stablemates, the Kawasaki Ninja ZX-6R and the Ninja 400. The new bike will be available in Pearl Blizzard White and Metallic Spark Black, but it would be sacrilegious for Kawasaki to not offer a green option and that’s where the KRT edition comes in with its lime green/ebony black livery.

Another big update on the new Ninja 650 is the addition of a 4.3-inch colour TFT screen that also offers Bluetooth connectivity. This replaces the digi-analogue seen on the older bike, bringing it up to date. Using Kawasaki’s Rideology app, riders can log their rides, monitor the status of the vehicle, receive notifications, and change the display settings.

The 17-inch wheels remain the same but while the previous Ninja 650 rolled on Dunlop Sportmax D214 rubber, the new bike comes shod with newer Dunlop Sportmax Roadsport 2 tyres. Dunlop claims that these tyres have a quicker warm up time and also offer more grip and stability under braking. Tyre sizes are unchanged at 120/70-ZR17 for the front and 160/60-ZR17 for the rear.

Another small but significant upgrade on the new bike is the redesigned pillion seat, which is now wider and thicker than before. Consequently, the backrest portion of the rider seat is also taller than before. This should result in increased comfort for both rider and pillion.

The engine itself has remained untouched, with the same 649cc parallel-twin engine powering the Ninja. However, we have observed that the exhaust system has been re-routed and the peak torque has gone down by 1.7Nm to 64Nm, and it also arrives 200rpm higher than before. All these changes indicate that the Ninja 650 might have been updated to meet Euro5/BS6 emission norms. However, the company hasn’t confirmed the same. The power output is unchanged at 68PS.

The rest of the motorcycle remains unchanged, meaning the same 41mm conventional front fork and monoshock adjustable rear shock. Twin 300mm front discs and a 220mm rear disc bring the Ninja to a halt with the help of dual-channel ABS. A kerb weight of 193kg and a low seat height of 790mm make this a motorcycle easy to live with, which is part of the reason for its popularity.

In overseas markets, the price of the Ninja 650 has remained unchanged at $7,399 (Rs 5.25 lakh) for the standard variant and going up to $7,999 (Rs 5.67 lakh) for the KRT Edition. In India, the bike is currently priced at Rs 5.89 lakh for the standard option while the KRT edition costs Rs 5.99 lakh (ex-showroom India). There is no word yet from Kawasaki about pricing in our country, but we hope they will follow the same pattern implemented abroad.