It’s got so many cuts and slashes that it’ll give Victor Zsasz a complex! 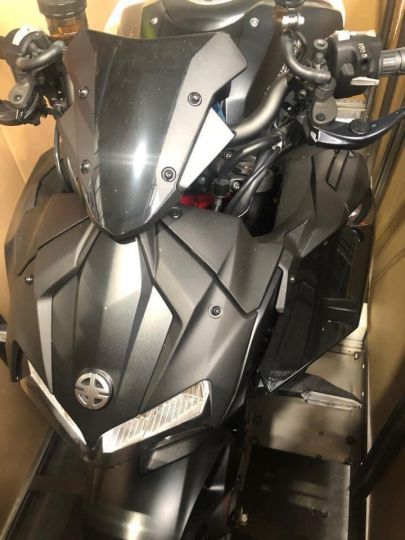 Recently, Kawasaki teased the ZH2, which is set to supercharge the naked segment with its erm, supercharged H2-derived engine. The bike is all set to be unveiled at the upcoming Tokyo Motor Show, but before that could happen, images of the hyper naked have been leaked online.

It looks like the bike is ready to be transported (presumably to the show). The images reveal a properly angular Sugomi design language with a low slung, angular, headlamp with the legendary Kawasaki River Mark logo. An interesting tidbit about this logo is that it used to be adorned on the flags of Kawasaki’s ships made from the Kawasaki Tsukiji Shipyard, which then became Kawasaki Heavy Industries. In essence, it is Kawasaki’s show of industrial might and a display of how technology has trickled down to its road-going machines.

As expected, the lighting system is all-LED and you can also notice the adjustable brake and clutch levers on the wide, tapered handlebars. Nestling at the centre of those bars is the sleek-looking TFT instrument console. It is expected to show a whole load of information including smartphone compatibility and to be honest, it remains to be seen how legible this sleek console will be.

Interestingly, the bike seems to sport a matte black finish unlike the futuristic self-healing coating on the H2 and H2 SX range. But expect Kawasaki to offer the self-healing paint as an option. The seat is obviously of split configuration but more importantly, it seems to have a thicker cushioning than the one in the Z1000. This hints at the possibility of the bike being slightly more practical and comfier to ride, but we’ll be able to judge better once it is unveiled.

Going by the length of the exhaust heat shield, it is likely that the bike has been tweaked extensively to comply with the Euro 5 emission norms without compromising much on power. When it comes to the powertrain, the motorcycle is expected to share the same heart as the Ninja H2 and is likely to make the same kind of power and torque as the faired bike too. For reference, the H2 makes a mind-boggling 231PS and an earth-shattering 141.7Nm of torque! If the upcoming naked makes the same kind of figures, it would be the most powerful supercharged production naked bike in the world. To give you a perspective, the current-gen Z1000 makes ‘only’ 142PS and 111Nm. Of course, expect all kinds of electronics to be present so that the bike doesn’t rip your face off when you twist the wrist.

The motorcycle is likely to enter our shores via the CBU route by mid-2020 at a price of around Rs 30 lakh to Rs 32 lakh (ex-showroom). Being the only one of a kind in its segment, the ZH2 will not have any natural rivals. But if you have a fetish for mental hyper naked motorcycles, the MV Agusta Brutale 1000 Serie Oro comes pretty close.