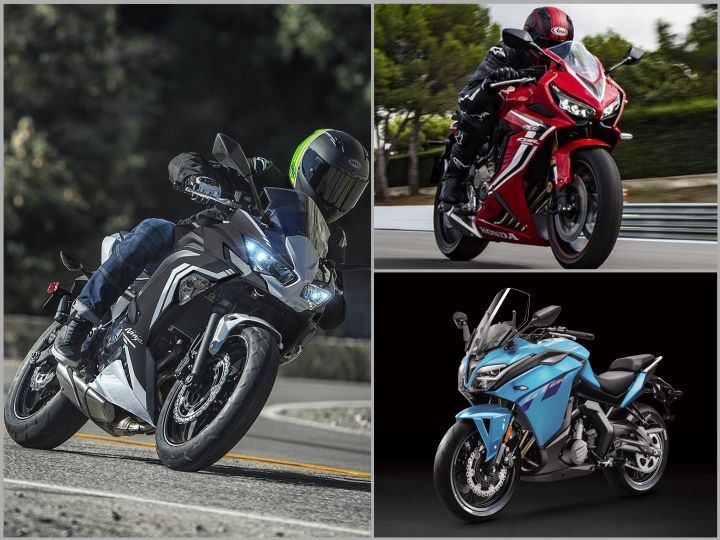 As far as the Indian two-wheeler market is concerned, one of the most important motorcycles that put the spotlight on the 650cc middleweight segment is the Kawasaki Ninja 650. The latest avatar of the bike has been launched abroad and it is only a matter of time until it makes its way to our shores. Interestingly, this segment also witnessed two new entrants in India: Honda CBR650R and CFMoto 650 GT and incidentally, these are the only two rivals that go up against the new Ninja. Here’s how the new Ninja 650 performs against its rivals on paper:

Compared to its previous iteration, the new Ninja makes the same amount of power but the peak torque has gone down from 65.7Nm to 64Nm. Also, the torque output is produced at 6700rpm, which is 200rpm later than the previous generation engine. This could be due to emission constraints but there’s no official word on the matter yet.

The CBR650R, on the other hand, packs a proper inline-four-cylinder motor, which should offer more visceral power delivery, in theory, thanks to the two extra cylinders. It is also equipped with traction control whereas the other two motorcycles are devoid of any electronic nannies apart from the dual-channel ABS.

As far as brisk dynamics are concerned, the Ninja seems to have the upper hand on paper as it is the lightest among its rivals and is a whole 17 kilos lighter than the Honda! CFMoto seems to have made the 650 GT’s motor a bit more laidback than its competitors, which isn’t surprising because Grand Touring is in the bike’s name itself.

The Honda CBR650R has the most sophisticated suspension among the lot and coupled with the bigger front and rear brakes it should offer better agility, theoretically. However, the CBR650R retains the Dunlop SportMax tyres of the CBR650F on both ends. And this rubber didn’t exactly inspire confidence while cornering, so it remains to be seen how the rubber makes the newer bike behave on the road in real-time.

The Ninja gets new Dunlop Sportmax Roadsport 2 rubber, which replaces the Dunlop Sportmax D214 tyres. It is claimed to offer quicker warm-up time, better grip, and stability under braking. The CFMoto 650 GT rides on CST Adreno Sport tyres on both ends. It is shared with the 650NK, and we found out that it can hold on its own when it comes to cornering hard. Expect the same from the 650 GT as well. However, with the added touring-friendly bits in the 650 GT, only a road test will answer our questions.

The 650 GT’s touring genes are apparent in its size too. It also offers the biggest fuel tank capacity and interestingly, the highest ground clearance as well! The bike also packs a reasonably accessible seat height, which should make life easier for shorter riders. Overall, all these aspects make it an ideal touring machine among the three for Indian road conditions—at least on paper.

Overall, the Honda CBR650R appears to be the sportiest of the lot but comes at a hefty price. If you’re looking for a good balance of performance and touring characteristics, the Ninja 650 is a good option spec-wise. But if you’re a hardcore touring enthusiast, the CFMoto 650 GT ticks all the right boxes.