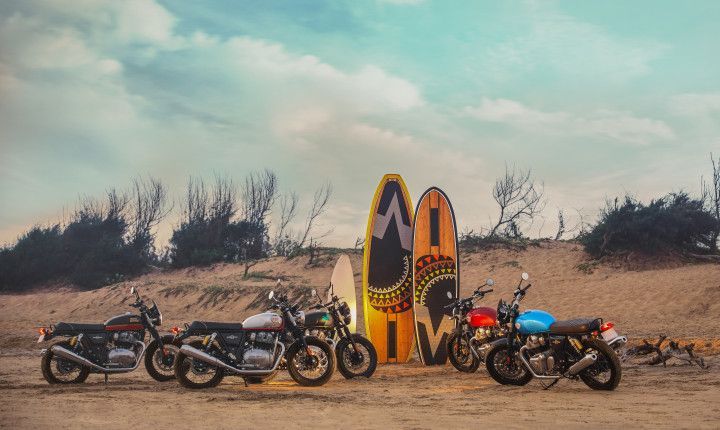 Royal Enfield seems to be on a colour update spree for its existing models. The first one to get such an update was the Himalayan, which also arrived with a Tripper pod and minor functional upgrades. The next motorcycle, or rather motorcycles to get new colours are the Interceptor 650 and the Continental GT 650. They have become rather pricey as well.

As has been the case, the Interceptor and the Continental GT 650 arrive at three price points: standard colours, custom colours, and chrome. The Interceptor 650 is now priced from Rs 2,75,467 (ex-showroom India), which is Rs 5,703 more than the 2020 model. Here’s a detailed breakdown of the prices:

For the additional Rs 6,000, the 650s are only get new colours. Of the colours available on the 2020 model, only the Orange Crush and Baker Express on the Interceptor and the Mister Clean (chrome) on the Continental GT 650 are still on offer. Here are the new colours for the Interceptor:

The new colours for the Continental GT 650 are:

Aside from these new colours, all bikes get black spoke wheels and black fenders (barring the Orange Crush and Dux Deluxe). Rubber fork gaiters are now standard across all models.

Nothing. This is a mere cosmetic update for 2021 as both motorcycles continue to be powered by a 648cc parallel-twin engine that puts out 47.6PS and 52Nm. It is housed in the same bolted-on dual-cradle frame and suspended by a telescopic fork and twin preload-adjustable shocks. It runs on 18-inch spoke wheels that are now wrapped in Ceat tyres, instead, of the Brazil-sourced Pirelli Phantom Sportscomp rubber that used to be provided earlier.

Royal Enfield had stated that the Tripper pod from the Meteor 350 would arrive as an accessory fitment on the 650s, but we have no word on that as yet. The Rs 6,000 premium would have been better justified had RE thrown in this feature.

The Royal Enfield Interceptor 650 and Continental GT 650 are still the most affordable multi-cylinder motorcycles on sale in the country and scream phenomenal value for money. Sure, the price hikes could have been justified better by offering a bit more than some fresh new colours. However, that should not deter you much from buying into a truly special experience!