A Royal Enfield That Goes As Fast As A Bullet! 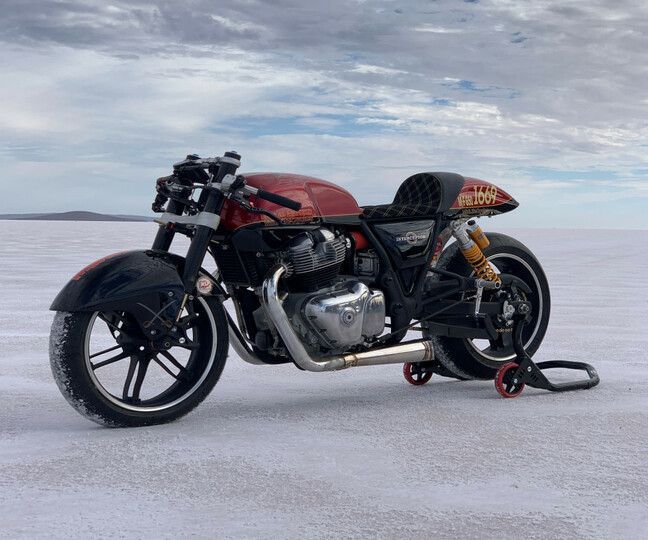 When we hear Royal Enfield, we instantly correlate it to an easy-going cruiser motorcycle made to munch miles. But the guys at Mid Life Cycles think otherwise. The bike-builder has customised a Royal Enfield Interceptor 650 into a salt racer which recently shattered the four-year old land speed record of 119.961mph (193kmph) in the MF 650 class (for 650cc un-streamlined motorcycles) at the annual Speed Week run at Lake Gairdner, Australia. In doing so, the motorcycle recorded a top speed of 132.050mph (212.514kmph), while the official record stands at 122.691mph (197.5kmph).

Piloted by first-time salt racer Charlie Hallam, the Interceptor 650 nicknamed ‘SABRE’ shattered the previous record in all of its three runs. What’s interesting is that the Interceptor 650 had minimal modifications, thanks to the class rules. It actually dates back to 2019, built during RE’s “Busted Knuckles Build-Off” programme.

Engine modifications for the Interceptor 650 include tweaked cylinder heads, camshafts, and throttle bodies. Along with this, the bike runs forged pistons while the counterweight crankshaft has been removed. The gearbox is also modified for minimal friction.

As for underpinnings, the guys at Mid Life Cycles threw in Ohlins suspension, lighter alloy wheels, custom extended swingarm, and custom sprockets along with Pirelli Diablo slicks at both ends. The motorcycle even misses out on a front disc brake because weight reduction, bro!

Design-wise, the bike is pretty purpose-built. It misses out on lights altogether, gets a super-low handlebar, and a big cowl at the rear along with a huge mudguard at the front. It also gets a shiny maroon shade with black pinstripes on the tank and the rear cowl.

Want a similar manic yet road-going Interceptor 650? Mid Life Cycles will retail a few performance parts in the future but sadly, only in Australia. If you can afford it, we suggest you get in touch with them and book your slots now!