2021 Royal Enfield Himalayan: Has RE Perfected The Formula? 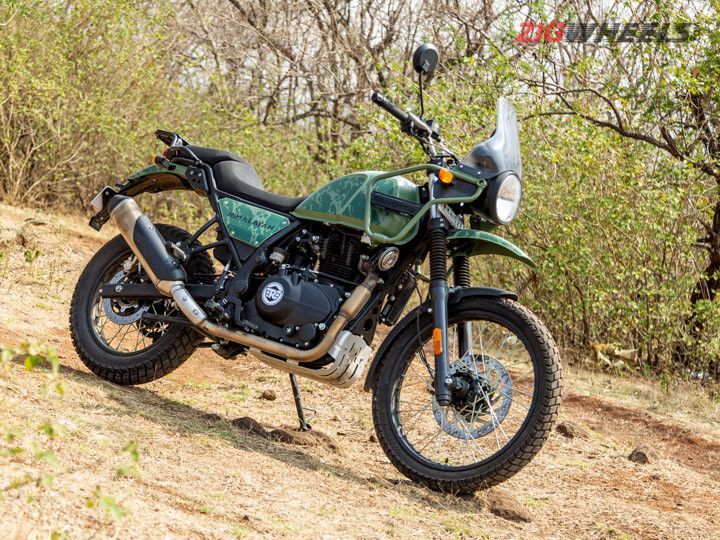 It was perhaps boardroom pressure or public anticipation, or maybe a mix of both, that led Royal Enfield to rush the Himalayan and launch it perhaps a little sooner (in early 2016) than it should have. The result was a troubled birth, plagued with quality control issues that almost irreparably dented the bike’s reputation. Credit where it’s due, RE has slowly and steadily chipped away at the bike’s shortcomings, ensuring proper quality levels while also modernising it with fuel-injection and ABS.

The flip side of that coin is weight and cost. The Himalayan BS6 we tested last year was a fine motorcycle. But it was nudging Rs 2 lakh and 200kg. More worryingly, the already just-about-adequate 411cc motor lost a touch of power, down to 24.31PS and 32Nm. Now, with the 2021 Himalayan, Royal Enfield has chosen to tinker with the formula yet again. Unfortunately, the weight and price issues haven’t been addressed; the Himalayan still tips the scales at 199kg, while prices have now crossed the Rs 2 lakh mark, thanks to a near-Rs 10,000 price hike. Instead, what RE has thrown in is a Tripper navigation pod and a few minor improvements. Do these elevate the Himalayan experience, or are they part of RE’s feeble attempt to justify a price hike?

Let’s start with the headline-grabber -- the Tripper Bluetooth navigation pod. Sure, it looks like it has been slapped on as an afterthought, making the Himalayan’s already busy cockpit even more crowded. RE could have tried to integrate it a little more seamlessly, but it’s no deal-breaker. Where else could they have put it? The exhaust downtube? It’s in front of your face, where it needs to be. Your grandma could pair her phone with it, it’s that simple to operate. Just download the RE app, head to the navigation section, and start scanning for the Tripper. If the Himalayan’s ignition is on, the Tripper should show up in the scan results on your phone. Tapping on it prompts the Tripper to start displaying a 6-digit code, which you need to punch into your phone. And voila, your phone is now Bluetoothed to the Tripper.

The next step is to type in your destination, after which, it starts to send navigation data to the Tripper. Unfortunately, this is where the ease of use ends. It’s not so much the Tripper’s fault, as it is our road infrastructure’s. The pod shows you simple instructions about what sort of turn to make at what point on your journey. This would’ve worked great had our intersections always been straightforward and simple left-right-straight affair. But those acche din are a long way off, so you will eventually arrive at a haphazardly planned intersection where the Tripper’s data isn’t comprehensive enough to tell you exactly where to go. Which means, you will inevitably make a wrong turn or two along the way, forcing the Tripper to reroute you.

It does the rerouting bit well, and you will almost always arrive at the desired destination. It just won’t be the most direct journey. So if you’re going to rely on the Tripper to navigate mazes and take you places, it’ll do that. But if you want to use Mr. Google’s all-absorbing eye to find yourself the quickest, most direct, and least-congested route to your destination, you’re better off spending a few hundred rupees on a handlebar phone-mount and a waterproof case. As far as navigation systems go, Ather has hit the nail on the head, showing you a complete navigation map on its TFT screen, instead of the turn-by-turn instructions shown on other Bluetooth systems.

As we dive deeper into the sparsely populated updates’ list, we arrive at the revised seat. RE says it has now used higher density foam to make the seat more comfortable. That could well be true. But it’s hard to tell, because the earlier seat was quite comfortable itself, so any additional easement is hard to judge. We wish RE had left the seat alone and focused elsewhere -- revised ergos. A slightly taller and wider handlebar -- wider so that you get more leverage when negotiating the tricky stuff and taller so that it’s more comfortable when standing up and riding.

The front frame, that acts as a mounting point for jerry cans, has been slimmed down so that it no longer fouls with the knees of taller riders. While this is a nice gesture from RE, it’s the sort of thing that should have happened as part of routine bug-fixing procedures anyway (and not something to shout about in a model year update). I have similar things to say about the revised front windscreen too. There was nothing really wrong with it, but if RE claims to have bettered it, well and good. Not really a very substantial change, though, and certainly not something you can use to justify the price hike.

A quick look at the brochure reveals the final changes for 2021 -- new colour schemes. The debuting Pine Green shade in these pictures makes the bike look like it’s caked in Medimix, and we’d trade it in a heartbeat for the Sleet Grey that has tragically been discontinued. That wraps up the changes on the 2021 Royal Enfield Himalayan

The mechanicals have apparently been left untouched, and just to be sure of it, we put the bike through our routine performance test. The VBox never lies, and the truth is that the 2021 Himalayan accelerates just as quickly as its predecessor -- be it from a standing start or in-gear roll-ons. One area that has taken a significant step forward is braking, with the updated bike offering considerably better bite and feel at the lever. The end result is a stopping distance that’s nearly 10m smaller from 100kph. However, some part of this could also be down to the new CEAT tyres RE is having to slap onto the Himalayan.

An Indian who isn’t thrifty is like a government that keeps its promises -- rare and confusing. Which is why the saddest part about the Himalayan’s update isn’t the lack of significant changes. It’s the fact that you can no longer buy the older, simpler, and economical Himalayan. The 2021 update is much like a compulsory accessory pack, one that doesn’t add adequate value, and hence, isn’t asked for. Earlier, somebody looking for navigational capabilities could opt for a phone-mount; someone seeking more comfort could go for RE’s accessory touring seat and handlebar. What they couldn’t do easily was legally extract more power from the engine or shed a few kilos. And these are the areas that we feel RE should have focused on. We hope that the Chennai manufacturer isn’t resting on its laurels, and that it tackles these pressing issues in the Himalayan’s next update.