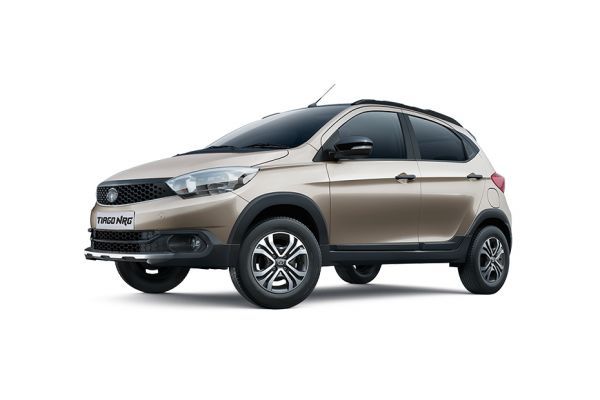 Tata Motors has introduced a new AMT variant for the Tiago NRG. The automatic variant is available in the 1.2-litre petrol option only. It will be the third variant in the Tiago NRG lineup apart from the petrol and diesel manual options. It is priced at Rs 6.15 lakh which is a premium of Rs 48,000 over the manual petrol variant. Compared to the standard Tiago, the NRG gets additional features like front and rear body cladding, roof rails, skid plates along with a 10mm higher ground clearance.

On the inside, the Tiago NRG gets additional features like an upgraded 7.0-inch touchscreen infotainment system with Apple CarPlay and Android Auto instead of the smaller 5.0-inch unit. It also features dual airbags, ABS, EBD, corner stability control, reverse parking sensors and seat belt warning as standard.

The Tata Tiago rivals the likes of the Maruti Suzuki Celerio X and the Mahindra KUV100 in the Indian market.

The Tiago NRG shares its engines with the hatchback. There’s no change in output at 85PS/115Nm for the petrol and 70PS/140Nm for the diesel, but Tata claims to have tuned the motor to suit the character of the NRG. Notably, Tata Motors has also deleted the City/Eco drive modes which are on offer in the Tiago. Also, the NRG can be had with either a 5-speed manual gearbox with either petrol or diesel power or a 5-speed AMT with the petrol engine.

Tata’s rugged hatch is available in a single fully-loaded variant. This costs approximately Rs 28,000 more than the XZ variant of the Tiago.

Tata’s Tiago now has a rugged cousin. Called the ‘NRG’ (pronounced energy), the cross-hatch has an added dose of toughness that we expect. Changes on the outside include a reworked front bumper with a faux skid plate, some cladding along the side skirts and wheel arches, and some more on the rear bumper and hatch door. Subtler additions come in the form of gloss black ORVMs, matte-black door handles, a blacked out roof and roof rails. All these additions see the NRG being slightly larger in size when compared to the hatchback it is based on. It’s 42mm longer, 18mm wider, and 52mm taller. The ground clearance too has been raised by 10mm (compared to the XZ) and now stands at 180mm.

Step inside the Tiago NRG and you’re greeted by a cabin we’ve become so familiar with in the Tiago and Tigor. The layout and space on offer remains identical to the Tiago. Tweaks come in the form of orange accents on the dash, new upholstery and a new 5-inch touchscreen that’s borrowed from the Tigor. Notably, there’s no Android Auto or Apple CarPlay on offer. Other features are shared with the top-spec version of the hatchback, which means you get steering-mounted audio controls, a stellar 8-speaker Harman audio system, chilled glovebox, manual AC and a detailed MID. Safety kit includes dual airbags, ABS with EBD and corner stability control, all of which is offered as standard.

Mahindra KUV100: The KUV100 is the only other SUV-like hatchback in this segment. Its funky design, fuel-efficient diesel engine and high equipment levels make it a compelling buy, while things like higher engine noise and excessive body roll make it less desirable.

Hyundai Grand i10 : The mid-sized hatchback from Hyundai has been given a refresh to keep up with newer cars on the block. The Hyundai Grand i10 offers a premium interior feel, efficient but peppy diesel engine, fun to drive characteristics and class-leading interior space without burning a hole in your pocket.

Maruti Suzuki Ignis: It looks quirky, but that’s pretty much the only problem with it. Otherwise it’s a nimble little hatch that can be quite fun to drive too.

Ford Freestyle : With the Freestyle, there’s no real point in buying the Figo. It’s a more refined package at an acceptable incremental cost. It’s a fantastic all-rounder that manages to combine the basics of space, fun and everyday usability right.