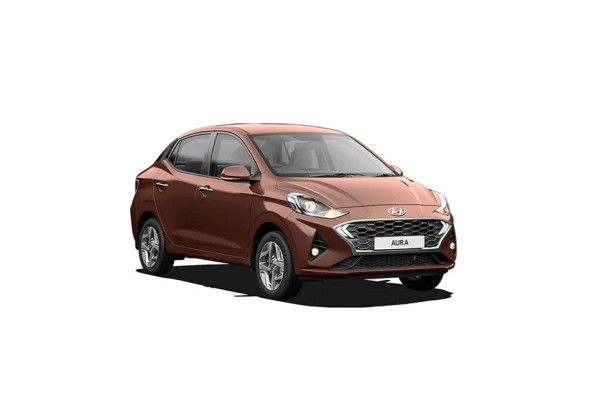 Ask your question from Aura owners and experts
Your Question should contain at least 5 characters Submit Cancel
Available EMI Options
Rs. 12,587 per month @ 10.5% Apply for Loan

Hyundai India has launched the Aura sedan in the country. Prices start from Rs 5.80 lakh and go up to Rs 9.23 lakh. The Aura is available in a total of 12 trim levels and four BS6-compliant engine options: one diesel, one CNG and two petrol engines.

The sub-4 metre sedan segment has lost some of its sheen to the more popular SUVs, but they still account for nearly 3.5 lakh units annually and that's a number that's hard to ignore for any manufacturer. With Honda yet to launch BS6 variants and Maruti dropping out of the diesel game altogether, the timing seems about perfect for Hyundai to launch an offensive.

Hyundai is therefore taking a measured approach, paying close attention to what it is you, the customer, wants from a compact sedan. So let’s see if they have been listening to their own research. Hyundai Aura Price 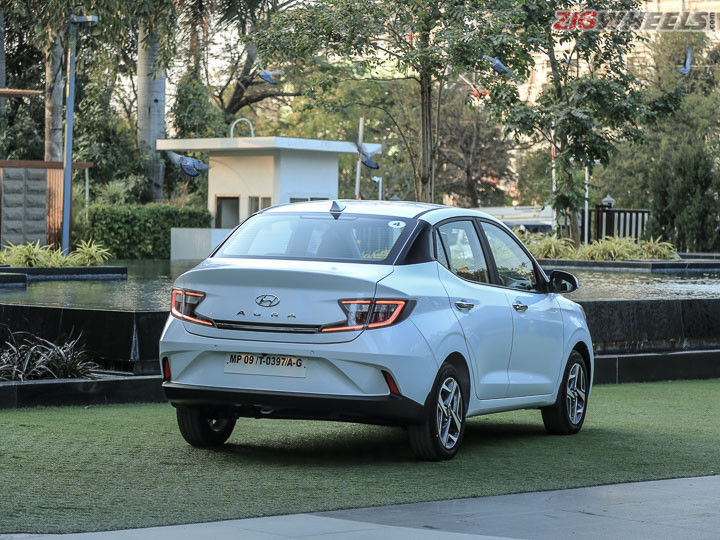 Based on Hyundai’s market research on all the things you consider when shopping for a sub-4 meter sedan, looks rank the highest, so that should mean the Aura should be the best looking sedan in the segment right?

Hyundai’s new ‘Sensuous Sportiness’ design language was eloquent with the Nios and the hatchback looked proportionate, cute and striking. With the addition of the boot to the design, we think that Hyundai has made a few compromises. The first being the black contrasting panel on the C-pillar, which seems to break the natural direction of the shoulder line like a speed bump. And we can’t help thinking that the new connected tail lamps might have looked better if they were mounted the other way around. 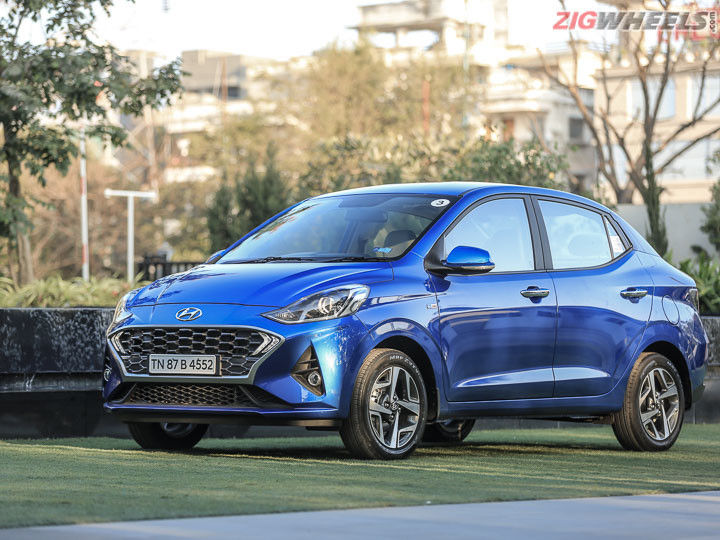 Based on the reactions we received when we released the first look and walkaround videos when the car was first revealed in December last year, opinions are clearly divided down the middle with people either loving the looks of the new Aura and others downright hating it. One thing for certain no matter which camp you belong to though, the Aura certainly has made an impression.

The interiors of the Aura are similar to what we’ve seen and loved in the Grand i10 Nios. So they still feel and look top notch and segment leading. The touch screen functionality, fit and finish levels and all the controls are similarly great. What distinguishes the Aura from it’s hatchback sibling are the dash, gear lever surround and the door trim accents that get a chocolate brown/bronze colouring.

The interiors of the Turbo petrol get a different black treatment both for the dash and the fabric of the seats but with some nice red accents on the side air con vents, climate control dials and the piping on the seats. 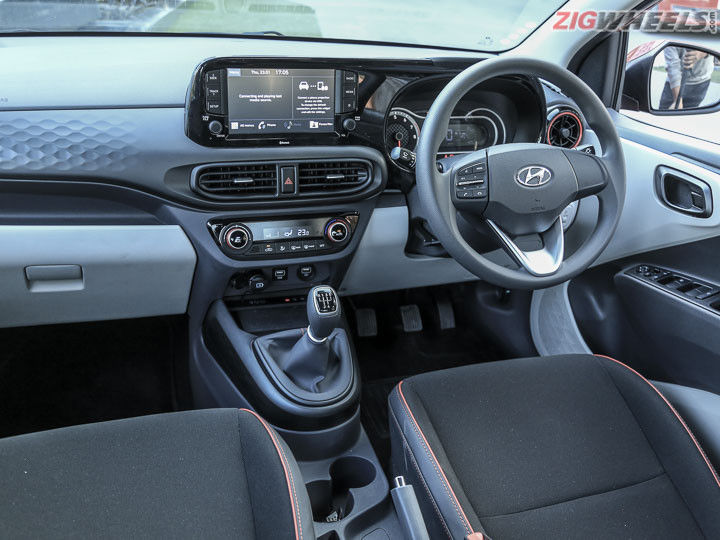 Wireless charging and cruise control in the top-spec petrol stand out and you still get all the essentials - an 8-inch touchscreen infotainment system, Arkamys-tuned audio, Android Auto Apple Carplay, a cooled glovebox and climate control. Like all other Hyundais, the Aura is kitted out as best as you could hope for in the segment both in the SX(O) and SX+ variants.

In terms of safety equipment, the Aura gets 2 airbags, ABS with EBD and rear parking sensors as standard. 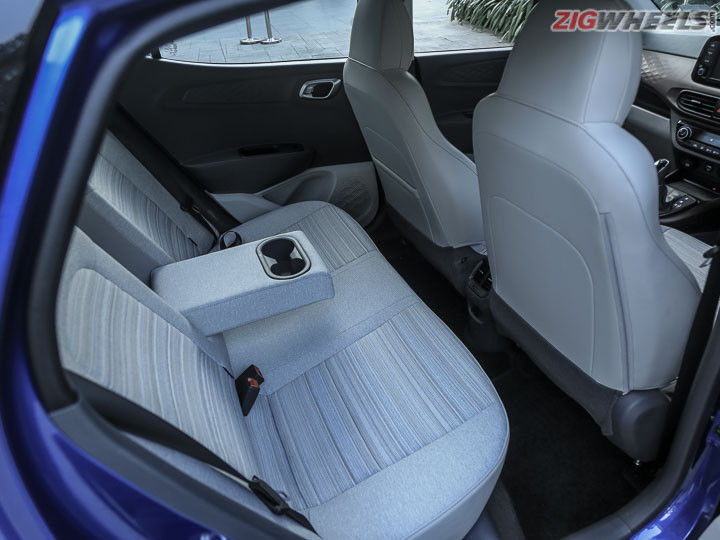 Comfy seats, plenty of knee room in the rear for average-sized adults, a drop down armrest and rear air con vents - what more could you want from in a compact sedan? The Aura stays on par on these fronts when stacked up against its main rivals such as the Dzire and the Amaze. There are two places where Hyundai could have improved things a bit and that’s the width of the cabin. And in tilting the seat backs rearwards and closer to the sloping roof line, to free up some space in the second row, they have reduced headroom when compared to what was available in the Nios. While this has made the seating position very relaxed, it’s still only comfortable for 4 passengers and 5 adults will still be a squeeze in this cabin. 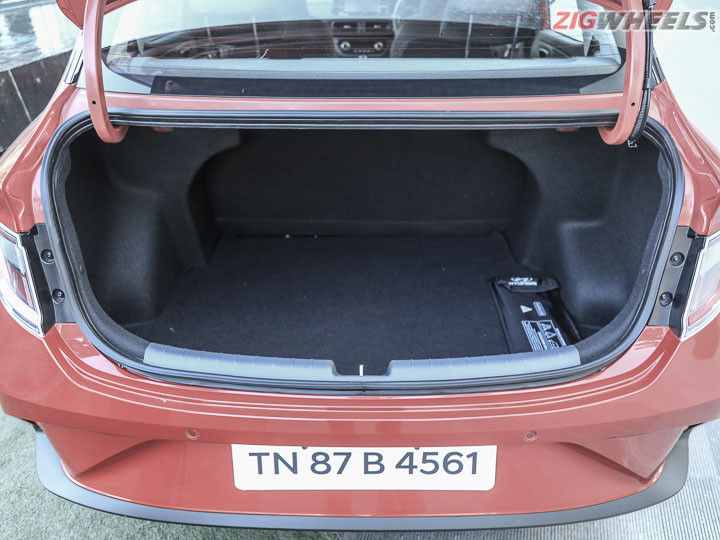 The boot may divide aesthetic opinions but on space, it’s right up with the best in the segment at 402 litres. Only the Amaze and the Tigor offer more boot space, but there’s still more than enough space in there for a vacation worth of luggage for the family. If there is one complaint, it would be to have a physical button on the boot itself. As it stands now, you have to pull a lever in the cabin if you don’t have the key fob at hand. 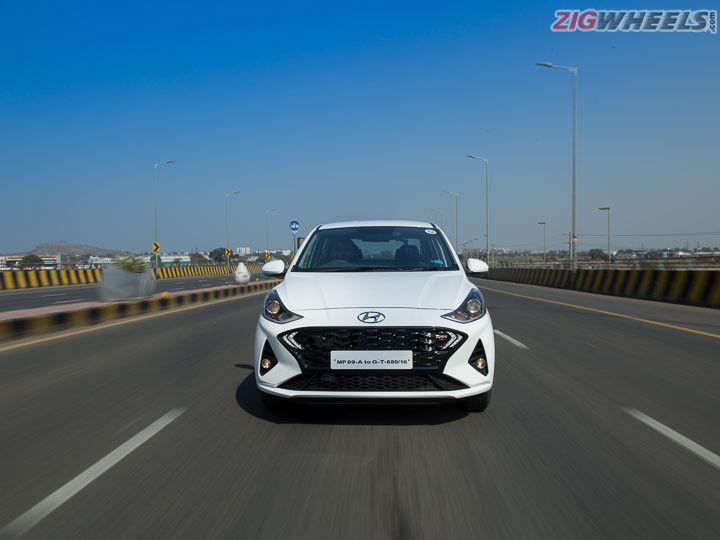 The 1.2-litre Kappa petrol remains unchanged in output and specifications but is now BS6 compliant. It’s beautifully refined with little or no vibrations and very little engine noise entering the cabin at city speeds. City driving with this engine is a breeze as the power delivery is gentle and linear. If calm and collected is your style, then this is the engine for you. It’s available with either a 5-speed manual or a 5-speed AMT. In the AMT, shifts are smooth and imperceivable in traffic, but drive excitedly and the shifts will feel slow.

The 1.0-litre Turbo GDi is a different beast and is our pick of the three engines in the Aura lineup. It pulls nicely from low rpms and the jump in power and torque is immediately apparent. It’s the same unit from the Venue but in a lower state of tune. Also, it is only available with a 5-speed manual transmission. Driving in traffic is really easy and you can leave the car in just one gear and allow the extra torque work for you when you get back on the throttle. While it is nice to drive, it’s not really what you’d call a sporty engine. And even though it pulls keenly from low rpm, power tapers off around 4500rpm. 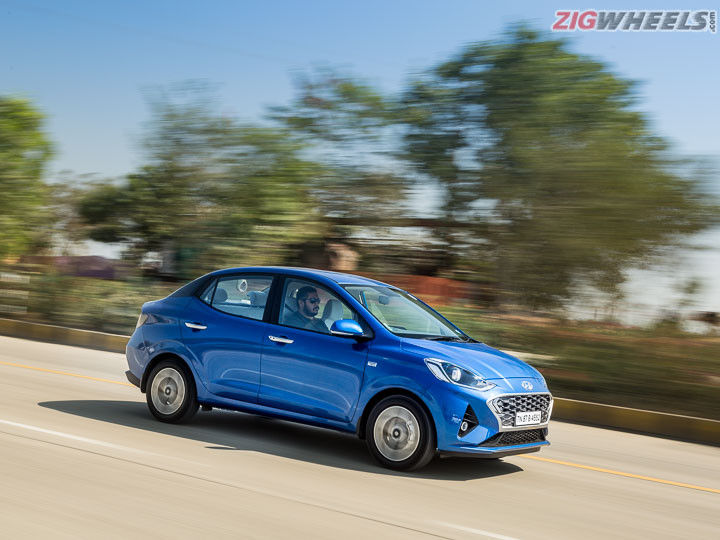 The new EcoTORQ diesel is based on the same architecture of the old 3-cylinder diesel, but with changes to the internals to help it clear the BS6 emission requirements. This diesel feels like it pulls stronger than the engine from the Xcent, but there is also now a more pronounced step in power delivery when the turbo kicks in. We only managed to drive the AMT equipped car and this felt at home in the city with the light steering pairing nicely with the smooth shifting AMT transmission through the crowded streets of Indore. Out on the highway, the AMT and diesel pairing is just as easy to drive, with head nod only evident when you get on the throttle hard for an overtake. 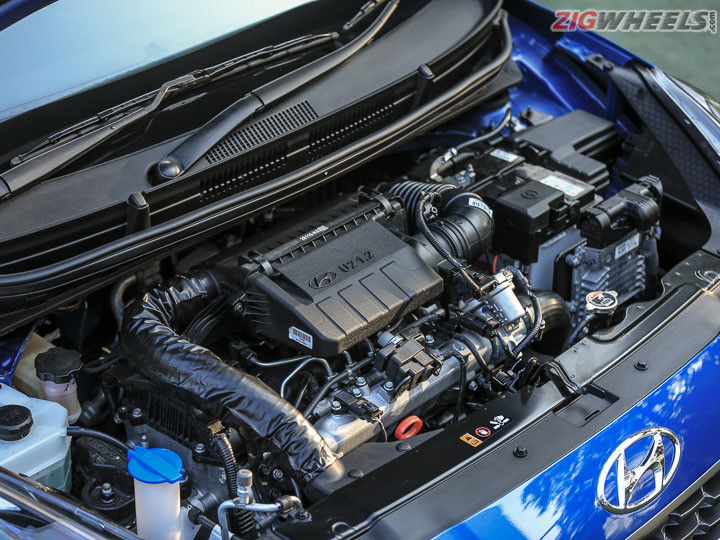 One disappointment was the refinement of the diesel engine. The old 1.2 diesel was so smooth and silent that after start up, you were sometimes left wondering if it was really a diesel. That’s not the case with the new EcoTorq, which is audible in the cabin and also accompanied by some vibes that can be felt through the steering wheel and the floorboards as well. 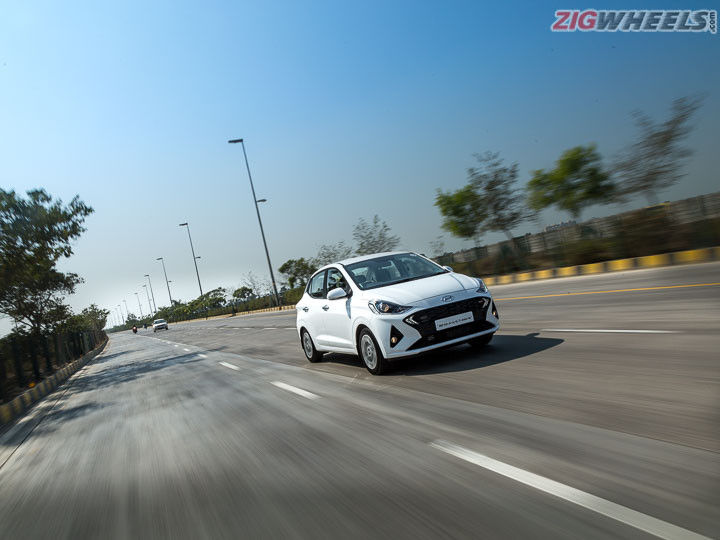 The Aura is nicely set up for spending time in the city and rides comfortably over speed breakers and the occasional pothole. However, you do feel some of the smaller imperfections in the road at highway speeds. When lightly loaded with just the driver and a passenger, the ride is smooth and planted. However, with a full load of things, it can get a little bumpy in the rear over bad roads and the cabin takes time to settle at higher speeds.

The Turbo has a different tune to its suspension and while it’s similarly comfortable over bad roads, it’s more comfortable for 4 passengers and also settles faster after going over level changes and expansion joints at triple digit speeds. 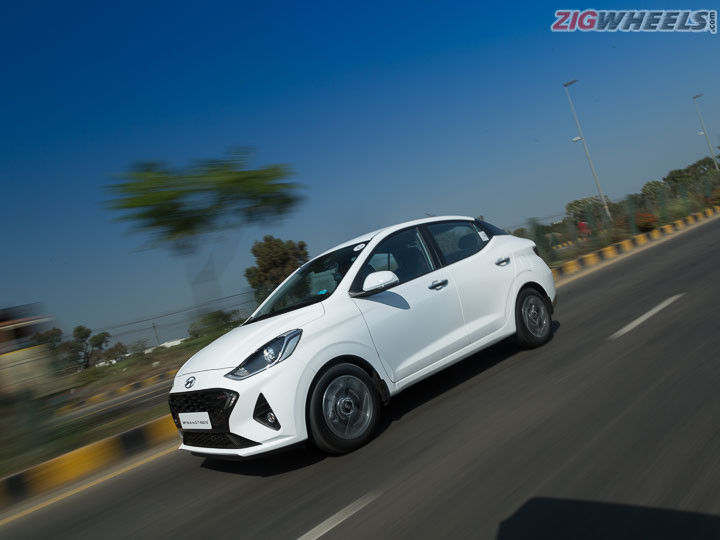 All BS6 engine options promise impressive frugality. And despite being a turbo with a little more performance on tap, Hyundai is still claiming 20.5kmpl, the same as the 1.2 NA petrol, which is quite impressive for both. The diesel is more frugal, of course, with Hyundai claiming 25.35kmpl. 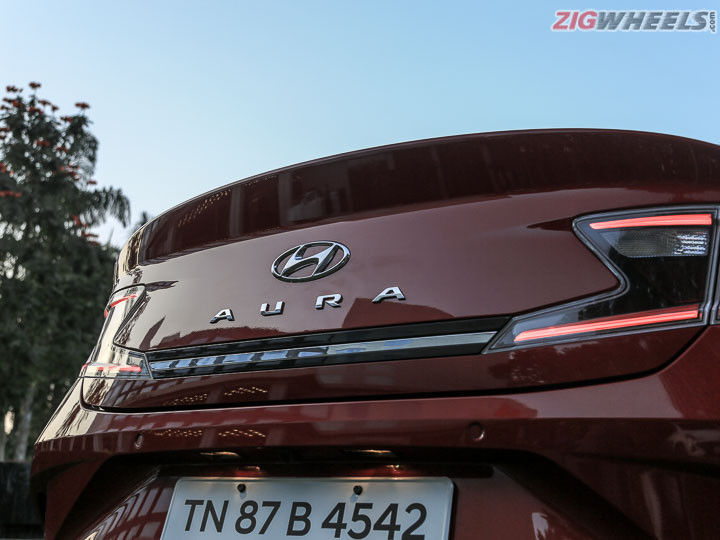 Priced between Rs 5.80 lakh and Rs 9.23 lakh, the Aura drives a hard bargain against its biggest rivals - the Dzire and Amaze. It also offers a full range of gearboxes and engines to choose from. The pricing is very competitive and on par with some of the Dzires variants and undercutting many of Honda Amaze’s variants. 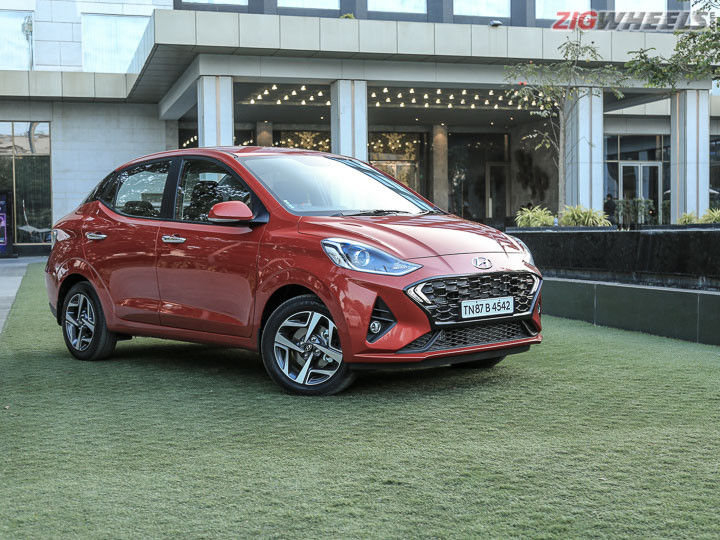 Hyundai is casting a wide net with the Aura, it has something to appeal to everyone. A smooth refined family petrol for the town, a BS6 diesel for the high millers and a peppy turbo for the responsible adult who still wants a bit of excitement behind the wheel. There's no glaring faults with it and yet nothing really stands out either. Yes, some of us do have to get over how that boot looks but there’s no denying that the Aura still packs in all the features you need in a cabin that will keep you smiling on a daily basis. And in a market that's looking for exactly that, the Aura may not make the biggest ripple but has enough going for it to stir up the pond.

Hyundai is aiming high with the Aura and there’s a multitude of engine, transmission and fuel options to appeal to a wide audience. So does it have what it takes to make a big splash?

What is the price of Hyundai Aura Top Variant?

The ex-showroom price of top variant of Hyundai Aura is 9.28 Lakh (Delhi).

What is the mileage of Hyundai Aura?

What is the EMI of Hyundai Aura in Delhi?

What are the top competitors of Hyundai Aura?

The top 3 competitors of Hyundai Aura are Maruti Dzire, Honda Amaze and Hyundai i20 2020.

What is the boot space in Hyundai Aura?

The boot space in Hyundai Aura is 402 L. View full specification of Aura

What are the best financing options for Hyundai Aura?