Looking for a crossover hatchback? We tell you if it's worth waiting for the Maruti Suzuki S-Cross or should you book the Hyundai i20 Active. 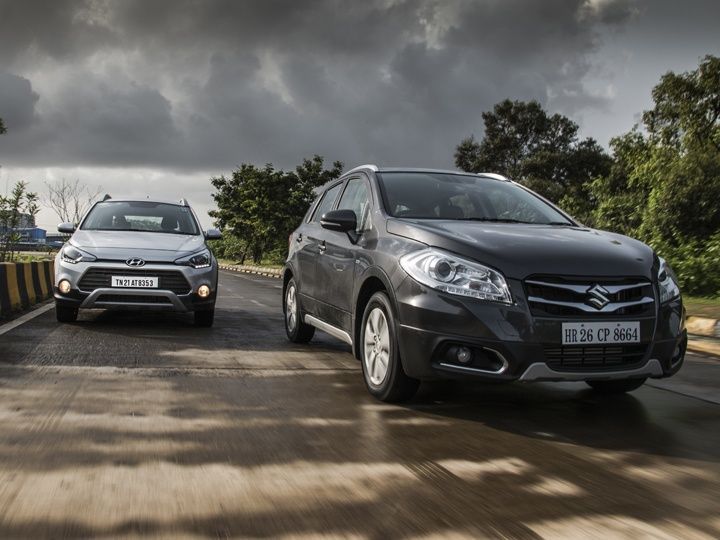 The S-Cross is Maruti Suzuki’s answer to the newly spawned crossover hatchback segment. And unlike the other cars in this class, it isn't just a butched up version of a hatchback. And despite that, things have been rather easy for Maruti Suzuki as this is the same car that is on sale in the international markets as well. But in India things are going to get a lot more difficult, and one of the reasons for that is… the Hyundai i20 Active.

Maruti Suzuki however hasn't taken the same route and introduced an all new crossover, which does help it score well but just not well enough to beat its rival. Yes, it does have the aggressive stance, and at around 4.3 metres in length it has intimidating proportions which a crossover should have. But it's design still has that typically Japanese conservative feel to it and simply for that reason it falls behind (delete: marginally). The alloy wheels for example could have been more stylish. However, we liked the way a part of the tail lights continue onto the boot lid.

On the inside both cars are pretty equally matched. While the Hyundai i20 Active feels airy and earns an advantage due to its dual tone combination to the dashboard, the blue-black treatment on the silver car that we got on test does look a bit tacky. That said, the overall layout does make it look youthful.

The S-Cross’ dash is well placed with the soft-touch plastic sandwiched between the hard plastic at the top and bottom. The silver surrounds around the centre console and the AC vents add a hint of style but it just doesn't feel as airy as the i20 Active.

The S-Cross is the longer of the two cars and it shows on the inside too. The Maruti Suzuki offering has a wheelbase that is 30mm longer than its rival in discussion and it does result in slightly more knee and leg room. Under thigh support on the S-Cross is better as well. And then there is the massive 353litre boot space which is considerably larger than the i20 Active’s 285litre trunk. Quality of materials on both cars is good.

Hyundai as a car maker has more often than not been unbeatable with regards to the feature it offers. But this time round, Maruti Suzuki has trumped it in this regard. The top-of-the-line S-Cross comes heavily loaded with features including a touchscreen infotainment system with Bluetooth, AUX, USB connectivity and Navigation. Although the i20 Active boasts of all these features as well, it misses out on the navigation system. Speed sensing auto lock, cruise control and leather upholstery are some of the features that are seen on the S-Cross but absent on the i20 Active. Both cars get projector type headlamps but the ones on the S-Cross also have HIDs for better illumination. In terms of safety, both cars come with front 2 airbags and ABS but the S-Cross gets disc brakes on all four corners while the i20 Active just gets front two.

Now to get to the heart of the matter. The Hyundai i20 Active sports the same 1.4-litre diesel unit as in the Elite i20. Which means it continues to make 90PS and 220Nm. The engine feels smoother than the S-Cross and is less noisy too but it only comes into its own once past the 1800rpm mark. The six-speed transmission is slick but the tall gear ratios make it a little cumbersome to drive in the city.

The S-Cross will be offered with two engine options - The Fiat sourced 1.3-litre diesel and the more powerful 1.6-litre mill that makes 120PS and 320Nm. Now it is the former that would directly compete directly against the i20 Active but we got out hands on the larger 1.6-litre motor for now.

The engine feels energetic and ready to go and it is all thanks to the fact that the peak torque comes as low as 1,500rpm. The linear power delivery does come in handy especially while making a swift overtaking manoeuvre. Moreover, all of 320Nm of torque readily available at about 1,750rpm ensures that the car pulls from really low speeds without any knocking whatsoever. However, below the mentioned engine speed, the S-Cross does feel a little sluggish. This unit too comes mated to 6-speed transmission which is precise but feels a little rubbery at times.

The handling dynamics of Hyundai cars have improved in recent times, but the i20 Active still isn't does feel as confident over a series of bends as the S-Cross. And that is mainly because of the softer suspension setup and the artificial steering feel. But that same attribute makes it that much comfortable to drive on bad roads. When going over rough roads, the bumps are not felt even for the passengers at the back.

The S-Cross’ steering on the other hand feels responsive and is weight slightly better than the i20 Active. And to add to that the firmer suspension setup gives it decent handling dynamics. The long wheelbase also has a part to play in inspiring confidence but the poor tyre grip on the S-Cross sticks out like a sore thumb. As far as ride quality is concerned, the S-Cross does manage to absorb most unevenness of the road with poise, but the larger bumps do seep into the cabin. But that is the sacrifice we are willing to make for some joy round the ghats.

For the S-Cross 1.6, Maruti Suzuki claims an efficiency of 22kmpl which isn’t considerably higher than the i20 Active’s 21.19kmpl. However, the S-Cross with the 1.3-litre mill claims 23.65kmpl, but in real world conditions would translate to much lower figures.

As far as pricing is concerned, the top-end trim of the Hyundai i20 Active costs Rs 8.90 lakh (ex-showroom Delhi). Although Maruti Suzuki hasn't launched the S-Cross as yet, if their history is anything to go by, we expect it to be priced around Rs 8-12lakh. In fact, it seems like the Manesar-based car maker will play it smart and price the 1.3-litre close to the i20 Active range and the 1.6 S-Cross cheaper than the Renault Duster in an attempt to eat into both their sales.

Maruti Suzuki has waited long to bring a crossover offering in the Indian market, so much that we almost thought that might just have been too late. But now, with the S-Cross finally here and with the kind of features, space and engine options on offer, it seems like the wait might just pay off.

Coming back to the fight with the i20 Active, the S-Cross does mange to trump it in more aspects than one. It has a longer list of features, boasts of slightly more space, has better handling dynamics and will return a better fuel economy figure as well. That said, it does fall behind in terms of looks and ride quality.

With everything in mind, as of now the S-Cross takes the title in this comparison, but it might just change if Maruti Suzuki doesn't price it right. Although I hope not, lest I have to write this verdict again.

Maruti Suzuki S-Cross Set To Get A Petrol Motor...