Have the updates enhanced the appeal of the sporty Yamaha scooter? 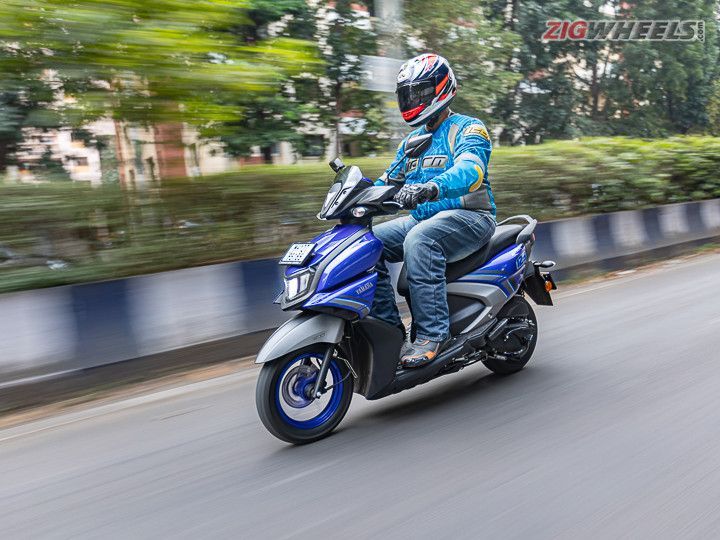 The Yamaha RayZR is a slightly odd scooter. On the one hand, it looks incredibly youthful, with its chunky panels and futuristic design. But on the other, its performance doesn't match the funky design, and scooters like the TVS NTorq will simply run rings around it. Even family-oriented scooters like the Suzuki Access have got this beat when it comes to performance.

It doesn't end there. Even in terms of practicality, the RayZR plays in the middle of the order and doesn't really impress on that front. This was made abundantly clear when it finished fourth out of six scooters in our mega 125cc scooter comparo. But for 2021, Yamaha has updated the RayZR with some new features, namely a hybrid system that promises more performance and efficiency. So does the RayZR Hybrid deliver on those promises?

Amongst the small list of new features on this RayZR, a lot of folks were asking for the new LED headlight. This headlight does make the scooter look more modern, and it's pretty bright too. And while the spread is quite decent, the throw at low beam is rather unsatisfactory on unlit roads.

The other update that this hybrid gets is Bluetooth connectivity. But before you get too excited about this, let me tell you that the RayZR doesn't use the fancy Y-Connect app that works with its Bluetooth-connected motorcycles, such as the FZ series or the R15. Instead, it uses the more basic Connect X app, which sadly has minimal features. You get the last parked location, hazard light switch, and a 'find my scooter' function… that's pretty much it!

But does this extra torque actually make a difference in performance? Well…yes…and no! In our acceleration tests, this RayZR hybrid proved to be a couple of tenths of a second slower than the standard RayZR in the run from zero to 60kmph. And that's despite being 1kg lighter now, making it the most lightweight scooter in the 125cc segment. But where it did perform better was in terms of roll-on acceleration. In our test from 20 to 50kmph, that torque boost really helped this hybrid, and it was about 0.2 seconds quicker than the standard RayZR. So overtaking traffic in the city is going to be a little easier on this hybrid for sure.

While the performance might not be anything to write home about, its segment-first fuel efficiency undoubtedly is! In our test, we got 71kmpl, which is not only more than the already frugal Fascino Hybrid, but it's more than any other scooter we've ever tested at ZigWheels.

All the other bits

Apart from these updates, the rest of the scooter is pretty much the same. It's pretty refined for the most part, although from about 40 to 60kmph, you do get a mild buzz from the floorboard. And speaking of the floorboard, it's roomy enough for even larger feet, but because of the odd shape of the apron, large items don't fit on it too easily.

And then there's the decently comfortable riding position, and the seat height is quite accessible. But as we had mentioned in our earlier review, this sloping seat design means you slide forward every time you brake hard. And the shape of the seat can cause butt aches if you're built on the heavier side. Pillion comfort, on the other hand, is quite good.

Pop open the seat, and you'll find that the 21-litre storage space, although not great, is pretty acceptable. The only problem here is that the Bluetooth control unit has been tacked on inside, which eats up a bit of space, and our fear is that if you're carrying anything heavy or sharp under the seat, it might damage this system. And even the fuel filler cap is a standard old-school unit placed under the seat. So, even though it has a remote seat opener, you'll need to get off the scooter and open the seat every time you're at the petrol pump.

Ride quality is unchanged from the standard RayZR, which has the front set up slightly on the firmer side while the rear feels a bit soft and wallow-y over undulations. And then there's the handling, which feels nimble, thanks to its low kerb weight of 98kg. It's decently stable while turning too, so you'll have plenty of confidence when darting through traffic. Even braking isn't too bad; in our test, it managed to stop a little better than the Street Rally version we had tested earlier (but that could be down to the more road-biased tyres on this one). That said, we would've really liked a little better feel at the lever.

So that's the RayZR Hybrid - a middle-of-the-order scooter that, despite its updates, still stays pretty much at the middle of the order. For about four thousand rupees more than the standard RayZR, this hybrid is value-for-money, sure. But if you seek performance from your scooter, you can get yourself the base disc brake-equipped TVS NTorq for a little less money. Otherwise, if you value practicality over everything else, the Suzuki Access makes more sense (for a little more money). However, if all you want from your scooter is funky looks and excellent efficiency, you can't do better than this RayZR Hybrid.