For The Spirit Of Racing 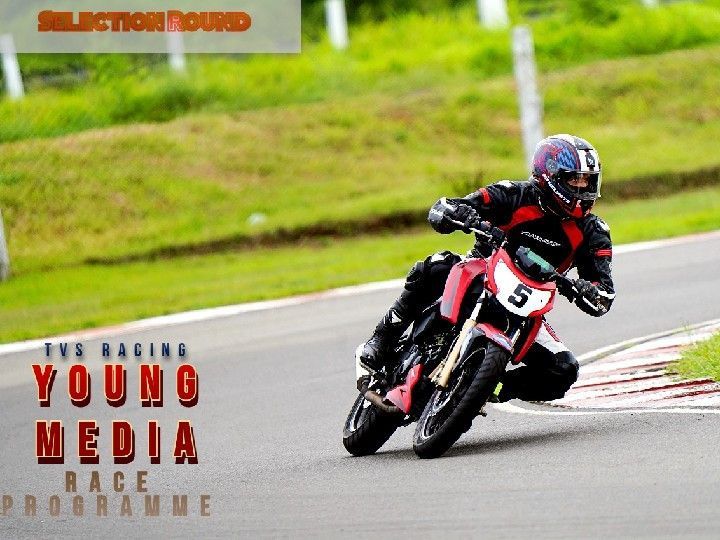 Comfortably perched on the couch, cracking open a cold one, watching men go around in a loop, fighting to shave off milliseconds for a few minutes of glory--pretty much sums up a weekend for racing enthusiasts, right? Last week though, the saddle of a race-spec TVS Apache RTR 200 4V replaced the comfort of my couch, glucose drinks replaced chilled brew and I found myself in pursuit of the quickest line around the short loop of the Madras Motor Race Track.

0.414 seconds. That’s what kept me from being the fastest man on the grid at the selection round of the fifth season of the TVS Young Media Racing Programme. Was I disappointed? Certainly. With two consecutive titles in our kitty, the pressure was tremendous from the moment I was chosen to represent ZigWheels. Was I disheartened? Heck, no!

The beautifully crafted programme has been designed to invoke the lunatic (read racer) in us, and kicked off with a training session. Right from race track etiquette to nailing the launch to perfecting your vision, body positioning, throttle control and braking, every lesson is about making us faster on the race track. And yes, all that in just a day of classroom sessions by TVS Racing’s Harry Sylvester, each followed by track bouts led by Jagan Kumar, eight-time winner at the Indian National Motorcycle Racing Championship.

The beauty of this programme is that everyone is armed with the same bike: the race-spec Apache RTR 200 4V. This bike is devoid of every single bit that makes it street legal. The changes to the internals include but are not limited to high-lift cams, retuned suspension, and a race-tuned intake and exhaust system. TVS’s choice of the Eurogrip rubber further added to the fun.

After the classes, 15 students, consisting of individual content creators and some representatives of various media houses were let loose on the track in two batches to find their fastest way around. Post the free practice session, we had 15 minutes to give it all and clock the fastest time, for only the first 12 would continue their journey in the three-race season.

Those 15 minutes on the race track recapitulated the art that motorcycle racing is. More than the competition, it was about outdoing ourselves through every corner, pushing not just the bike’s, but our limits lap after lap. Of course, we faltered. Some of us overshot corners, some low-sided, but each of them got back in the saddle when they had every reason not to. All for the love of the sport and motorcycles.

The day concluded with 15 gleaming faces, every single one content with experiencing the ‘edge-of-the-seat action’ in the literal sense. With the selection rounds now done, the first race weekend is scheduled for mid-August. While the feeling of being a racer is yet to sink in, I am certain that watching a race from the comfort of my couch will never be the same again.