Picking one over the other is extremely difficult 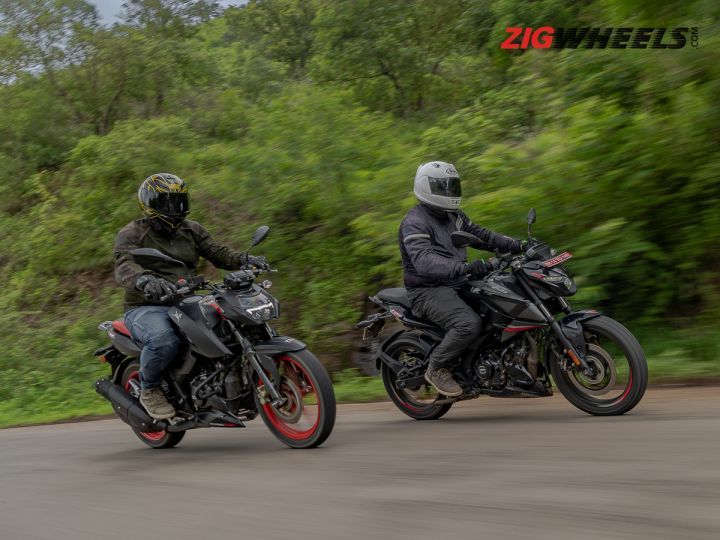 I am in a pickle. Because for this test, we have two brilliant 160cc motorcycles that represent the best of Indian engineering. On the one hand we have the current king of 160cc commuters: the TVS Apache RTR 160 4V. And taking the fight to it is an old formidable foe who has revamped itself big time: the Bajaj Pulsar N160. Both are extremely competent motorcycles and picking the winner amongst the two was nearly impossible. So, here’s how these two stack up in the real world.

Matters Of The Heart

The highlight of motorcycles are their hearts, each one beating in a manner that its respective maker earned its sporty stripes.

So, just like everything TVS makes, the Apache RTR 160 4V was born, developed, and fine tuned by putting it through its paces around a race track, not once but numerous times. As a result, it has the most powerful motor in the 160cc sporty commuter space. And it is lighter too.

Surprisingly though, it is actually the Pulsar that turns out to be the quicker motorcycle of the two. It might seem shocking but the reasoning is quite simple. Since Bajaj Pulsar’s have been about ruling the streets and on the street, torque talks. The 1.5PS power deficit is offset by a wide torqueband that churns out 14Nm from revs as low as 3000rpm. Plus, the motor revs up quicker too.

The sorcery that you are witnessing above just goes to show that while the RTR is making more power, it isn’t able to utilise its extra potential well. All of that added horsepower is made higher up in the rev range. So, while it does allow you to hold each gear for longer, you’re not really gaining as much speed in the process. And with gear shifts to account for, the gap between the two bikes becomes even more prominent. Perhaps, the soon-to-arrive mild update version that we spotted recently brings it back in the RTR’s favour, eh?

The torque spread also helps the Pulsar surge ahead of the RTR slightly when it comes to roll-on acceleration. The new Pulsar motor is a peach, allowing the rider to ride away from speeds as low as 25kmph in fifth gear without much complaint. This effortless riding characteristic is what surprised us at our first ride and after riding it back to back with the RTR, it becomes even more endearing. That’s because you have to work the RTR’s gearbox just a bit to keep it singing sweetly.

Thankfully, both motorcycles have slick five-speed gearboxes and light slip-and-assist clutches, but even here, it is the Pulsar that is doing a slightly better job.

And then we come to what used to be the RTR’s strongest suits: engine refinement. We often felt it to be too smooth, almost electric like. Well, with the new updates given last year, you can feel a very light buzz at the touch points, which are nowhere bothersome.

The thing is, though, Bajaj engineers have worked a lot on improving the NVH levels on the N160 from its predecessors. Or rather mainly on the vibration damping aspect as you just can’t feel a thing from the engine below 8000rpm. You do get a sense that there is an internal combustion engine pulsating beneath you, so it isn’t numb by any means and the exhaust tune is also quite delightful. If only the harsh clattery sounds coming from the cylinder head were somehow dulled down, it would be an even better experience.

Better breathability and more outright grunt helps the RTR sustain decent Highway speeds better and hence runs calmer at 85kmph too. Hence no surprises that it has the more efficient motor for mile munching. Within city limits though, it is the Pulsar with its supremely tractable motor that generates an incredible City fuel efficiency score of 59.11kmpl, almost 6kmpl more than the Apache.

Not Just A Boyhood Racer

Show the two bikes a set of curves and both relish going quickly around them. It is here where the RTR 160’s race-honed chassis starts to edge it out for the Apache. It instils great confidence when you want to go fast around a bend. It is sharp to turn in, pretty stable when leaned over and nimble enough to make quick direction changes.

It isn’t that the Pulsar is lacking here, though. Only when compared to the RTR do you realise that it still isn’t that sporty. The wider section front doesn’t allow for sharper turn-ins and the firmer suspension tune means mid-corner bumps aren’t dealt with as much ease. It still remains a competent setup, one that will put a smile on your face.

RTRs of late have become better stoppers. And with this last update, it has become better. It has a fiercer initial bite than the Pulsar. But when it comes to bringing the bike to complete halt, the N160’s more predictable setup helps it shed speed more rapidly than the Apache. The feedback at the levers is more precise as it allows you to dial in just the right amount of braking force always. Plus, with the wider safety net cast by the dual-channel ABS, the Pulsar is definitely the more safer bike of the two.

As good as both of these bikes are at the sporty bits, the two are equally proficient at the sensible stuff. The Pulsar’s extremely tractable motor isn’t the only reason why it is an effortless commuter. It is also the upright riding stance with just a hint of forward aggression that hits the right spot. The seat is spacious, accessible for all and well cushioned. The pegs aren’t that rear-set. If I had to nitpick, I just wish it had a slightly wider handlebar, as the current ones limit the leverage on offer.

The RTR’s saddle experience is comfy too but not as much as the Pulsars. The race-focused ergos, especially with the lower seat height and slightly high set footpegs, do tend to cause some discomfort to larger or heavier riders.

While ergonomically the Pulsar is better, the RTR makes up for it by offering a more sorted and composed ride. The RTR’s Showa-tuned suspension is supple and mushy, doing a brilliant job of filtering and absorbing any sort of bumps. Even over the larger imperfections the bike’s remains settled, and the rider in firm control.

Here’s where Bajaj’s platform engineering business hurts the N160’s case as the N250 borrowed suspension components have been left unchanged. Due to the lesser weight of the N160, the tune doesn’t match up to the levels of comfort you would’ve wanted from a sporty commuter. The monoshock has a firm edge and does toss the rider over sharp bumps.

The ride improves with a pillion on-board, though; the monoshock doing a much nicer job of absorbing the undulations. While your companion won’t complain much riding pillion on either bikes, we found the RTR to edge out the Pulsar narrowly in this regard. The Pulsar has the more upright pillion stance with naturally positioned pegs (the pegs on the RTR are slightly higher) and well positioned grab handles. However, the Apache has more space on offer, is easier to hop on to and the ride quality is more sorted.

It is easy to get dazzled by a plethora of features that TVS has equipped the RTR 160 4V with. Full digital console with Bluetooth connectivity and turn-by-turn navigation, span adjustable levers, LED headlight and a lap timer are some of the more prominent features that would be hard to find on a bike not only of this segment but a cut above too. Riding modes are a bit gimmicky for a 160cc bike, with no serious tangible benefits offered in terms of performance or fuel efficiency.

The Pulsar’s relatively simpler brochure is actually more helpful. The projector headlight is just as strong, the console has a crisp feel with all the necessary data that you would need on commutes and the tank mounted USB charger is neatly done as well. Plus, dual-channel ABS just boosts its case further.

What Kind Of Sportiness Do You Prefer?

This was a very tough test and picking the winner is impossible. It is like picking who the GOAT is: Cristiano Ronaldo or Lionel Messi. You just can’t. It isn’t as clear cut a case as it was in the past comparisons where the Apache RTR 160 4V used to romp ahead. Hence, credit must be given to Bajaj for making the Pulsar N160 as brilliant as the Apache and by doing so, bringing back the glory days of the Pulsar brand.

How we can help you choose between the two is by directing you to make the best decision for yourself. If you are someone who wants an effortless commuting experience, the Pulsar’s super tractable nature and ultra refined experience would appeal to you more. And the fact that it is no slouch is an added bonus.

The Apache RTR 160 4V continues to be a great sporty motorcycle, especially for those who are just starting their sport riding journey. Its sporty genes are balanced well with sensible stuff. And it can set you up nicely for bigger, meaner and sportier motorcycles that you aspire to have in your future.

So, the winner is you, the buyer. Because both of these bikes are absolutely brilliant. And you will not go wrong buying one over the other.