Is the baby NS the best and sportiest 125cc bike on sale today? We find out 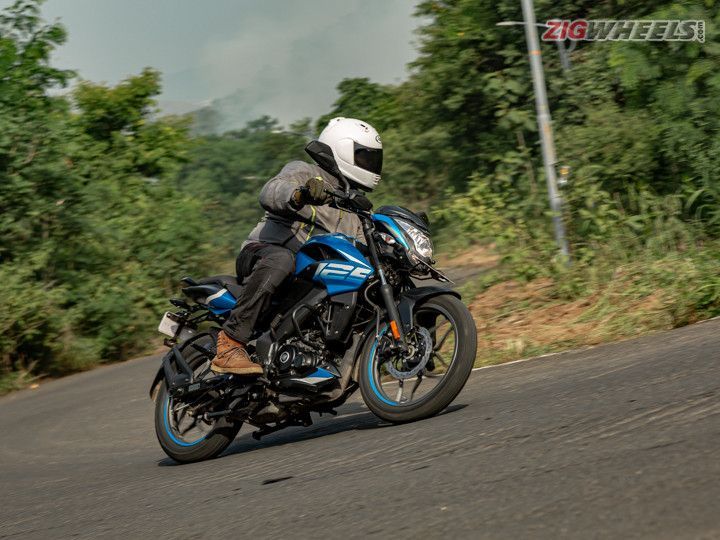 A couple of years back, Bajaj surprised us by launching the Pulsar 125. It was the most affordable and the least powerful Pulsar to ever go on sale. While we understood the business reasoning behind it, as a former Pulsar owner I felt that Bajaj had diluted the Pulsar brand a bit too much and was disappointed.

Fast forward to 2021 and during the Covid-19 lockdown Bajaj surprised us again by riding in the Pulsar NS 125, and I thought it was another disappointment. But guess what? It isn’t! In fact, we feel this is the sportiest and most practical 125cc motorcycle on sale now, and here’s why we think so.

Has An Appetite For Revs

Unlike the Pulsar 125, the NS125’s motor has been derived from the Pulsar NS160, and Bajaj engineers have reduced the bore and stroke figures.

This has two benefits. The first and more important one is that it produces slightly more power and torque than the Pulsar 125. Second being that Bajaj engineers didn’t have to waste much effort in re-engineering the engine mounting points to accommodate it in the perimeter frame. Additionally, the engineers managed to get this new motor BS6 certified by employing an electronic carburetor instead of fuel injection, thereby further reducing costs.

The simplest manner in which I can describe the difference between the two engines is that the Pulsar 125’s motor feels heavy and cumbersome while the NS 125’s engine feels lighter, rev-happier, and has a sharper throttle response.

It also offers a stronger mid-range and you feel a punch from the motor around 6,000rpm, which makes commuting and hustling the bike in city traffic equally enjoyable. The roll-on timings signify the more tractable nature of the NS125’s powerplant. I must also mention that the 5-speed gearbox does its job perfectly with precise shifts.

But once you hit the highway, there is no hiding the fact that you’re riding a 125cc bike as the NS125 builds speeds at a leisurely pace. It does manage to cruise between 70-80kmph but there are vibes for company. Most of these vibrations can be felt on the pegs and the fuel tank. What will really bother and irritate you is the effort needed to plan your overtakes, which requires a downshift or two.

Light on the wallet

The Pulsar NS 125 is among the most frugal 125cc bikes that we have tested yet. As you can see the tractable nature of the engine meant that one didn’t have to shift through the gears at city speeds a lot, and hence fuel efficiency here was incredibly high.

But as expected, out on the highway the numbers dropped as the engine was strained, thus consuming more fuel.

Quick on its feet

In comparison to the Pulsar 125, the NS125 has a longer wheelbase and is also 4kg heavier. Now, on the face of it, you might think that the NS125 would be lazier to steer. But that’s not the case and it's because of the perimeter frame (it’s the only bike in the 125cc class to feature it). It gives the NS 125 great balance and a sense of lightness that disguises its heft. The other bits that aid its agility are the skinny tyres and the monoshock suspension.

The steering is very sharp, direction changes are swift, and the NS125 hustles through traffic effortlessly. And if you wanna learn the art of cornering around mountain twisties, this NS125 is up for it.

Talking about ergos, the clip-on handlebars and slightly rear-set footpegs result in a sporty stance. The seat height is a bit tall at 805mm, but the bike’s agility and the sense of lightness should instill confidence in shorter riders.

The telescopic fork does a good job of absorbing any bumps and undulations on the road, while the monoshock is set up a bit on the firmer side. That said, it’s not so stiff that the rider gets tossed off the seat when riding over bumps. As for the brakes, they do a decent job in terms of bite and feel, but unfortunately ABS has been given a miss to keep costs in check. I feel ABS should have been offered as an option to improve safety.

Yes, the styling of the NS125 is almost a decade old, but by 125cc standards it looks sporty and dashing. I am not sure how the Pulsar NS200 and NS160 owners might feel about this new bike copying their bikes’ design, but that’s Bajaj for you--milking the most out of every design they have.

However, unlike its elder siblings who seem to have taken a fancy for Govinda with their loud new colours, the Pulsar NS125 is subtler, with an anodised finish on the frame and wheels, and I really like this new chill shade which Bajaj aptly calls Beach Blue.

The NS125 isn’t loaded with features and sports the same semi-digital instrument console with a large analogue tachometer. Again this isn’t radical but by 125cc standards there’s nothing to complain about. You also get backlit switches as seen on its elder siblings.

The most important bit and why this bike exists: pricing. Yes, the NS125 carries a hefty premium of around Rs 20,000 over the Pulsar 125. But when you compare it to the NS 160, it’s around Rs 17k cheaper. So Bajaj has bridged that gap perfectly with this bike.

The Pulsar NS125 offers a great combination of frugality, cost and dynamics. Yes, performance could have been better but it isn’t a deal breaker given the segment it plays in.

However, the baby NS really shines when you bring the KTM Duke 125 into the picture, for which you will have to shell out an eye watering Rs 70,000 more. Yes, the KTM is a much more premium product, but the performance difference between the two is only really visible in outright acceleration, and almost nowhere else. Hence in our opinion, this is the best sporty all-round 125 bike you can get today.