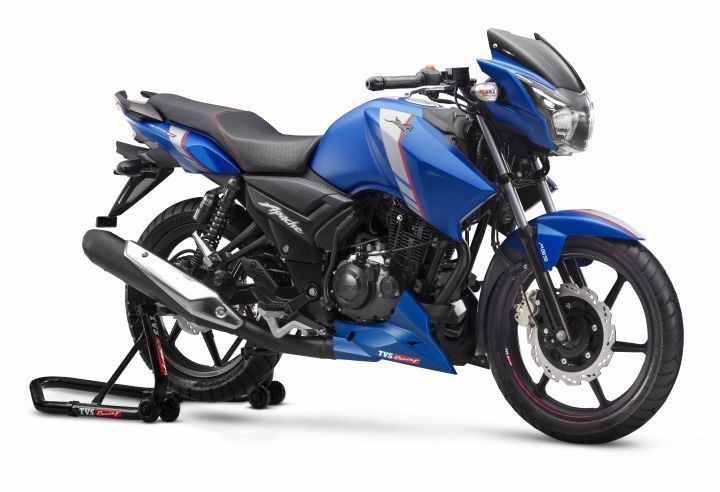 TVS has updated its entire Apache RTR range of bikes below 200cc with the safety net of ABS. The upgrade comes in the light of new government safety regulations which kicks in three days from today. The bikes which have been updated with single-channel ABS, or ‘Super Moto’ ABS as TVS likes to call it, includes the Apache RTR 160, Apache RTR 160 4V and the Apache RTR 180. Don’t mistake the ‘Super Moto’ mode for switchable ABS, though. It's a simple single-channel unit that acts on the front brakes, giving the rider complete control of the rear brake.

The Apache RTR 160 is available in two variants - rear drum and rear disc. The bike has also received new graphics to keep it looking fresh. Other additions include a new seat and bar-end weights to reduce vibrations.

While that makes the sub-200cc Apache bikes compliant with new safety regulations, there’s still the question of the Apache RTR 200 4V FI ABS R 2.0. Essentially, there are three variants, of which, the carb variant gets ABS as an added option while the fuel-injection variant is set to be updated with ABS soon. Considering the carb variant already gets ABS, the non-ABS variant will be taken off the shelf pretty soon.

Mentioned below are the prices of the revised models and the official press release from TVS:

Hosur, March 28, 2019: TVS Motor Company, a reputed manufacturer of two-wheelers and three-wheelers in the world, today announced that the entire TVS Apache RTR series has been updated with ABS. The Super Moto ABS for Apache RTR 160 2V, Apache RTR 160 4V and Apache RTR 180 provides ultimate safety for the rider. The new generation ABS unit on the TVS Apache RTR series motorcycles has been developed with a special algorithm, extensively derived out of the racing track. This enables the rider to find the quickest line around the corner without losing any speed.

Commenting on this, KN Radhakrishnan, Director & CEO, TVS Motor Company said, "Since inception; TVS Apache series have revolutionised performance biking by introducing cutting edge technology from their factory racing versions. In 2011, we were the 1st manufacturer to introduce twin channel ABS (Anti-lock Braking System) on Apache RTR 180, in the Indian two-wheeler industry. In line with this tradition, today, we are delighted to announce the inclusion of Super Moto ABS across RTR 160; RTR 160 4V and RTR 180 versions. This one of a kind racing tuned ABS technology that ensures maximum dynamic performance along with cutting edge safety technology to our consumers. The motorcycles are already on sale in market to ensure proactive compliance to the regulatory requirement laid down by the Government of India.”