We spent a few hours at the TVS test facility in Hosur riding the new Apache RTR 160 4V. Just how much of a change is it? 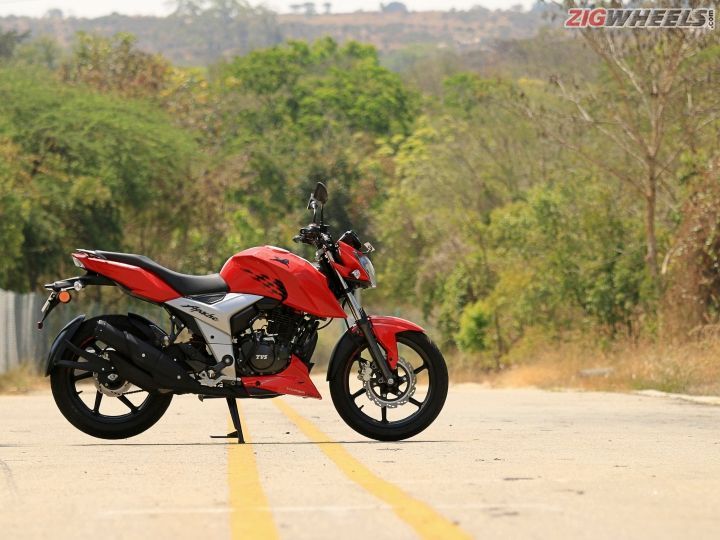 For the last couple of years, the name ‘TVS Apache’ has meant an extra dose of excitement. Back in 2016, the Apache RTR 200 really impressed us, and late last year, the Apache RR310 just blew us away. Now though, it’s the turn of the Apache RTR 160, a bike that hasn’t seen a substantial update for quite some time.

But don’t think for one second that this is merely a cosmetic update or just a facelift. Because this Apache RTR 160 4V is a brand new motorcycle. And a hint about one of the biggest changes is in the name... 4V!

As the name suggests, this Apache 160’s motor has a 4-valve head, much like the Apache RTR 200. In fact, this whole engine has been derived from the 200. It’s a 159.7cc single-cylinder air cooled unit which has the same bore and stroke dimensions - 62mm x 52.9mm - as the earlier RTR 160, but the compression ratio has been bumped up to 10.15:1. To assist in heat management, it features oil cooling as well as a “ram-air” duct behind the right tank shroud to channel air to the engine. And there’s fuel-injection on offer as well. The end result is the best in class power and torque figures for a 160cc single-cylinder air-cooled motor: 16.8PS @ 8000rpm and 14.8Nm @ 6500rpm respectively.

TVS also offers this Apache RTR 160 4V with a carburettor setup as well, which makes the same amount of torque as the fuel-injected bike, but a little less power: 16.5PS @8000 rpm to be exact. And both the carburetted and FI versions of this Apache hold the bragging rights for the best power-to-weight figures in their class as well.

It’s interesting to understand why TVS has kept the carburettor option with this new motorcycle. Firstly it keeps the starting price low, making it easier and more affordable to jump on to the Apache brand. And secondly, according to TVS’ own claims, the carburetted bike gets to 60kmph a bit quicker than the FI version. And that’s despite making a little less power compared to the FI. TVS claims that the carburetted bike does zero to 60 in just 4.73 seconds (4.8 seconds for the FI).

Acceleration feels brisk, but linear, and there’s plenty of pull to be had in the mid-range as well. The motor’s tractability is extremely impressive as well, as it can pull from speeds as low as 30kmph in 5th gear without any signs of strain or lugging!

Here the 5-speed gearbox also need to be mentioned, as it offers up a very slick shifting experience. Out on the TVS test track, we never missed a shift, whether riding aggressively or at an easy pace.

One big highlight of this engine has to be its sheer refinement level. It feels extremely smooth at pretty much any rpm, and there are almost no vibrations even high up in the rev range. It does hit some resonance at 9,000rpm, causing a bit of buzz in the tank and the centre panel, but that goes away past 10,000, and it is smooth once again all the way to its redline of 11,500rpm. This has to be one of, if not the smoothest, motor in this class.

There is a minor difference in the refinement levels of the FI and the carburetted bikes though. The FI is just that little bit smoother, and also offers up a slightly sharper throttle response. And when you’re in the very upper band of the rev range, the FI doesn’t feel out of steam. The carburetted bike on the other hand feels a little gruntier, though it is a little gruff as well. But in many ways the carbed bike feels more enjoyable to ride, thanks to its slightly punchier power delivery in the mid range.

That said, as impressive as this engine is, it’s missing that raw character that earlier RTRs were known for. And that reflects even in its exhaust note, which, even with the same muffler as the RTR 200, feels a bit flat.

It’s not just the RTR 200’s motor that has made its way into this RTR 160; so has its chassis, which TVS says is “race-derived”. It’s a double cradle diamond frame which uses the engine as a stressed member. But while the main diamond frame has been lifted straight off the RTR 200, the rear sub-frame is completely different. TVS says that this chassis offers exceptional levels of torsional rigidity, and that has allowed for the suspension to be tuned really well.

The suspension setup consists of conventional telescopic forks at the front and a preload-adjustable monoshock at the back. Now the 160 makes do with 33mm diameter forks, unlike the 38mm on the RTR 200. But that doesn’t make this bike any less stable, as the forks and monoshock have been made and tuned by Showa. And that endows this bike with fantastic handling abilities.

Light on its feet

The TVS test track is basically two long straights with one huge right hander, on which we put in quite a few laps on both versions of this new RTR 160. Unfortunately it wasn’t the best environment to test the full handling prowess of the bike; but that said, it turns in really quickly, and at the same time, it doesn’t feel twitchy or nervous like the old 160. Here, the longish 1357mm wheelbase of the bike really helps it provide it mid-corner stability.

On our first few laps though, that rear preload was set on the softer side, especially considering my heavy weight. So the bike was moving around a bit through the corner. But once we dialed up the preload, it just settled in. And after that, through the long right hand sweeper at the track, the bike felt very planted.

This Apache comes equipped with TVS Remora tyres at both ends: a 90/90-17 up front and a 130/70-17 at the rear. But that rear rubber is only offered on the rear disc brake variants, as the rear drum variant gets a 110/80-17 rear. But put the bike through its paces and it’s clear that this RTR 160’s handling prowess is down primarily to the chassis and suspension setup, because the tyres are average at best. Hats off to TVS for engineering such a brilliant setup, which we think should feel even better with better rubber.

To be honest, the brakes were a bit of a disappointment. The front brake lever feels spongy and there’s almost no feel from it. Even the bite is not all that great. In fact, a couple of times, under very hard braking, we got massive brake fade. While we don’t believe that these brakes will be an issue for everyday use, if you’re riding hard and fast, such as on a racetrack, you will need to recalibrate braking distances in your head. On top of that, TVS isn’t offering ABS, not even as an option.

Visually, this Apache RTR 160 4V looks almost identical to the 200. It carries over the same headlight design with LED DRLs, the same chunky 12-litre tank with its offset fuel filler, the same panels - although the tail panel is slightly different - and even the same LED tail light. The instrument cluster too has been seen before on the 200. The only change here is that the carburetted bike gets one with an orange backlight and misses out on a gear indicator, lap timer and fuel efficiency meter. The one on the FI gets a white back light.

But there are some differences here as well, such as this centre panel which is finished in silver, as opposed to the dark grey and black that you find on the RTR 200. Even the 200’s clip-ons have been ditched in favour of a one-piece handlebar, which we think looks better on a naked streetfighter motorcycle.  And as we mentioned before, the subframe is different too, and that’s because the seat setup has been changed. Gone are the split seats, instead replaced by a contoured single-piece seat.

But is it comfortable? Well, a seat height of 800mm isn’t exactly short. I’m about 5’10” and I was able to get my feet flat on the ground, but shorter riders might find it a bit of stretch. That said, the seat and the bike itself is fairly narrow, so it shouldn’t be much of an issue. The seat cushioning is soft, but not overly so, and that makes it quite comfortable for someone with more generous proportions as well. The pillion part of the seat, on the other hand, though comfortable, isn’t very large. But overall, it’s a bike that should fit most people, as the riding posture too isn’t very aggressive - something you can happily use for the daily grind.

It’s very clear that even though it looks like the RTR 200, this RTR 160 4V is a very different motorcycle. And it is a big step up from the older 160. But is it “race-derived,” as TVS claims? In that regard the handling is absolutely sublime - it’s precise and planted at the same time. And even though the motor doesn’t have the same raw edginess as the older Apache, it is probably the quickest bike in its segment now.

But it doesn’t play in a segment where handling and performance is the be all and end all. It has to be very usable as well. And on that front, the motor’s refinement and tractability will be huge draws. This new Apache RTR 160 4V is available in three variants: a carburetted one with a rear drum brake, a carburetted one with a rear disc brake, and the fuel injected version that only comes with a rear disc setup. And these are priced at Rs 81,490, Rs 84,490 and Rs 89,990 respectively (all ex-showroom Delhi).

Apache purists might argue that this new 160 has lost some of its RTR-ness. But it’s become a bike that really will do most things quite well - whether it’s commuting, sport riding in the twisties, or even clocking some highway miles. It certainly feels like a bike you can live with, and have fun on at the same time. And that in our book, earns it high praise.