How does the Apache RTR 160 4V compete against the recently launched Honda X-Blade and the segment veteran Bajaj Pulsar NS 160? Let’s find out 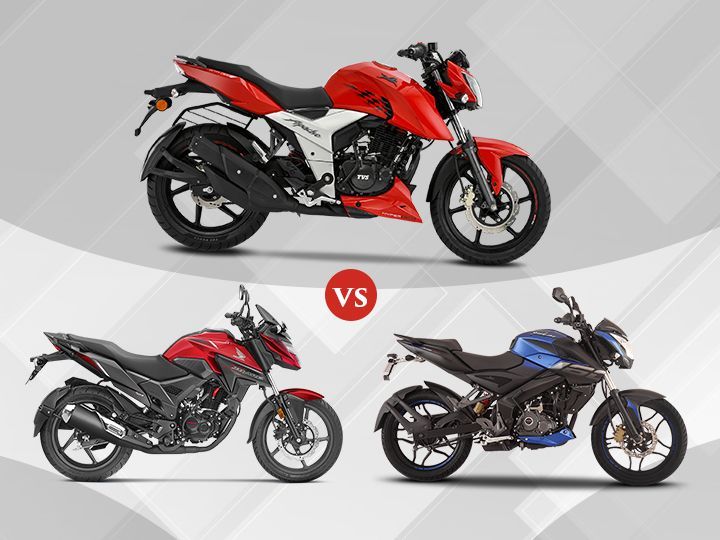 In the market for an entry-level naked street fighter? Confused between the new TVS Apache RTR 160, the Bajaj Pulsar NS 160 and the Honda X-Blade? Well, worry not as we pit them against each other on paper to find out who emerges on top.

TVS is offering the new Apache RTR 160 4V with two engine options - EFI and Carbureted, just like it does with its elder sibling, the Apache RTR 200 4V. The fuel-injected version of the 159.7cc oil-cooled single-cylinder engine with 4-valves produces a segment-leading 16.8PS of power at 8000rpm. The carb version, on the other hand, puts out 16.4PS. Torque figures remain the same on both variants - 14.8Nm at 6500rpm.

The Honda X-Blade, on the other hand, produces the lowest performance figures among the three bikes featured here. Powered by a 162.71cc air-cooled, single-cylinder engine, the X-Blade puts out 14PS of power at 8500rpm and 13.9Nm of torque at 6000rpm.

The Apache RTR 160 4V borrows a lot of elements from its elder sibling. These include features such as the LED tail light and a fully-digital instrument cluster which displays the odometer, fuel range, lap timer, top speed and more! However, the RTR 160 opts for a more practical single-piece saddle instead of the split unit seen on the bigger bike. Other sacrifices include a conventional handlebar instead of the clip-ons on the RTR 200.

Honda's new 160cc offering isn't any different when it comes to features either. However, it does get an LED headlamp, something which is missing on both the Apache and the NS 160. Other features include an LED tail light and a digital instrument cluster, which is not as extensive as the one seen on the Apache.

The Bajaj Pulsar NS 160 misses out on LED headlamps but does get LED tail lamps borrowed from the NS 200. Apart from this, it also utilises the semi-digital instrument cluster with a gear shift indicator seen on the bigger bike.

The Apache RTR 160 4V utilises the split cradle frame that underpins the RTR 200 4V. TVS has used telescopic forks at the front and a Showa monoshock unit at the rear while braking is taken care of by 270mm front and 200mm rear petal discs on the Fi variant. The carb version, on the other hand, is offered with a 130mm drum unit at the rear as standard. However, buyers can upgrade to a disc brake at the rear too. This makes it the only bike in this comparison to do so. The bike packs a 12-litre fuel tank and tips the scale at 147kg (kerb). Its 17-inch wheels are shod with 90/90 profile tyres at the front, while at the back you get slimmer 110/80 section tyre on the drum brake variant and wider 130/70 unit with the disc brake variant.

The Honda X-Blade comes with a diamond type frame and uses telescopic forks at the front and a monoshock unit at the rear. The bike is brought to a halt using a 276mm front disc and a 130mm rear drum unit. Its 17-inch wheels are shod with 80/100 front and 130/70 rear section tyres. The bike packs a 12-litre fuel tank and tips the scale at 140kg (kerb), making it the lightest of the lot.

The Bajaj Pulsar NS 160 packs a superior perimeter frame which offers more rigidity, allowing for a more stable ride and agile handling. Bajaj has equipped the bike with telescopic forks at the front and a gas-charged monoshock at the rear. Braking is handled by 240mm front disc and 130mm rear drum unit. Its 17-inch wheels come wrapped with 80/100 front  and 110/80 rear section tyres. Just like the above two bikes, it too packs a 12-litre fuel tank and slots in right between the RTR 160 and the X-Blade with a kerb weight of 142kg.

The TVS Apache RTR 160 4V comes across as the most potent motorcycle here. Not only is it the most powerful among the three, but it also comes equipped with better mechanical components. Its competitive pricing earns it more brownie points too. So, if you are in the market for an entry-level street-fighter, we’d recommend you give the TVS a shot.