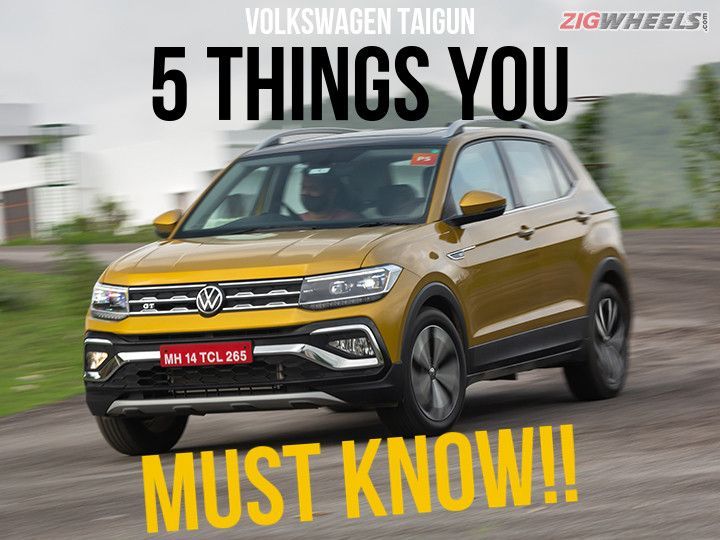 Volkswagen is gearing up for the launch of the Taigun, the carmaker's first made-in-India offering, tomorrow. The SUV will take on a heavily contested segment and seems well prepared to make a mark in it.

Here are five things you should know about the Taigun ahead of its September 23, 2021, launch:

The Volkswagen Taigun marks its presence with a wide grille flanked by bold LED headlamps with DRLs connected via a chrome strip and a Tiguan-like front bumper. The roofline and its shoulder line heavily resembles its Skoda sibling, the Kushaq. Also, both the Taigun and Kushaq are based on the same MQB A0-IN platform, so should have a lot of similarity in terms of dimensions. The ‘bold’ quotient is heavily implied on the rear end with connected tail lamps that run across the width of the SUV, outlined by a gloss black strip.

How’s It On The Inside?

Inside the VW Taigun, you will get a dual-tone cabin, covered in grey and beige with silver trim elements running across the dash. The Skoda Kushaq’s resemblance is carried here too, with the touch based climate controls and familiarly shaped gear lever carried over. But the touchscreen is an integrated unit unlike the Kushaq’s floating setup.

The Volkswagen Taigun will get two turbo-petrol engine options:

Also Read: Our First-Drive Review of the VW Taigun here.

Volkswagen is expected to retail the Taigun at prices ranging from Rs 10.5 lakh to Rs 18 lakh (ex-showroom). Bookings are open for a token amount of Rs 25,000 via the official website or at your closest VW dealership. The upcoming VW will take on the Hyundai Creta, Kia Seltos, MG Hector, Tata Harrier, 5-seater Mahindra XUV700, Skoda Kushaq, and the upcoming MG Astor.