Should You Pick Up The Skoda Rapid Rider Plus Over A Maruti Dzire, Hyundai Aura Or Honda’s Amaze?

The Rapid Rider Plus comes at an incredible price that undercuts several sub-4 metre sedans. Is that alone enough reason for you to pick it up, though? 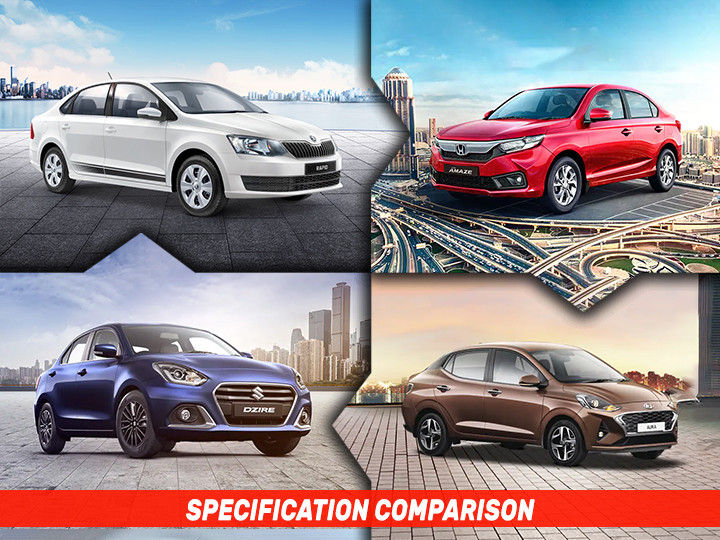 The Skoda Rapid Rider Plus offers incredible value for money with its feature list and attractive Rs 7.99 lakh ex-showroom price tag. In fact, it’s priced at par with most of the top-spec sub-4 metre sedans. Moreover, there’s an even lower-spec Rider variant that misses out on a few features compared to the Plus -- and it is priced Rs 50,000 less! This variant is certainly the most popular one in the Rapid’s lineup and its waiting period stretches till October. Skoda is right now giving an opportunity to buyers to upgrade to the Rider Plus.

This got our heads scratching with the idea: ‘Do you really need a sub-4 metre sedan when you can get a bigger compact sedan?’ To answer that question, we pitch the Rapid Rider Plus with the top three sub-4 metre sedans: the Maruti Suzuki Dzire, Honda Amaze and the Hyundai Aura. Let the game begin.

Note: Since the Rapid is offered in petrol MT guise, we have pitched it against the petrol manual sub 4-metre sedans only

Yes, the Skoda Rapid Rider Plus undercuts the Dzire and Aura while it's priced at par with the top-spec Honda Amaze. Some of you might be thinking that this might not be a fair comparison as the Rapid Rider Plus is from a segment above.

But let us explain why you should consider Rapid Rider Plus over these sub-4 metre sedans. Grab some popcorn and swipe down.

The Rapid Is Bigger!

Considering that the Rapid is from a segment above, it’s the longest in this test and even has the largest wheelbase here. This should ideally translate to more legroom and a larger boot space. However, its narrow width means it’s more of a four-seater, which is further accentuated by the large rear hump, making things uncomfortable for the fifth occupant.

The widest car in this test is the Maruti Suzuki Dzire while the tallest car here is the Hyundai Aura. A shoutout must be given to the Honda Amaze, which manages to pack a large 420 litre boot despite measuring under four metres.

The Rapid Rider Plus comes with a touchscreen infotainment system with Apple CarPlay and Android Auto, climate control, keyless entry and power windows on all corners. All of these features are found in the sub-4 metre sedans featured here as well.

However, the Rapid Rider Plus, being a base-spec variant, misses out on niceties like push button start, cruise control, steering-mounted audio controls, alloy wheels and even a multi-info display. These are offered in the Dzire, Amaze and the Aura.

But hey, we aren’t complaining as the base-spec Rapid comes equipped with most of the features one would ever need. Height adjustable driver’s seat and a multi-info display would have completed the package though.

All cars here get the bases covered with dual airbags, ABS with EBD and rear parking sensors. This being a base-spec Rapid, it misses out on a rear parking camera and ISOFIX mounts, both of which are offered in the other cars. Only the AMT variants of the Dzire come with electronic stability control.

The Most Powerful Here!

The Skoda Rapid is the most powerful car in this test. This fact could seal the deal for enthusiasts. Read how it performs in our Skoda Rapid first-drive review. The only car that comes close to the Rapid in terms of power and torque is the Hyundai Aura Turbo.

That said, you might be put away with the fact that the Rapid is offered with a manual transmission only for now. It remains to be seen if the upcoming 6-speed torque converter gearbox will be offered in the Rapid Rider Plus. The Dzire and Aura NA petrol comes with an AMT while the Amaze is offered with a CVT.

Sure, the Rapid Rider Plus has some downsides in this test:

But as a package, the Rapid Rider Plus feels complete, especially when you value its aggressive Rs 7.99 lakh price tag. Here are some positives:

The Rapid Rider Plus, though aged, makes a good case for those who are ready to trade in some niceties for a bigger car with better road presence. It’s also more solidly built and has decent performance onboard. Do you agree with us on our verdict? Let us know your views in the comments below.