It’s likely to be launched in early-2021 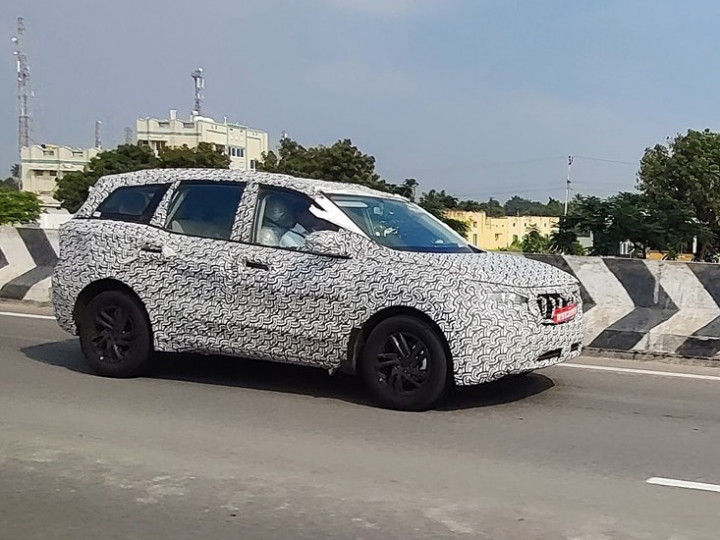 The ageing Mahindra XUV500’s successor has been spotted testing yet again in the country. The latest set of spy shots reveal more design details with the highlight being the exposed 5-split-spoke alloy wheels. They are finished in black and could be limited to the sportier versions like the Harrier Dark Edition. Finer details are yet to be seen but Mahindra’s slatted grille takes centre stage and it should come with LED lighting at the front. The wrap-around LED tail lamps also look much more premium than before.

The interior is a major step up when compared to the existing model. The highlight here is the Mercedes-like twin-screen setup comprising the digital instrument display and infotainment system. The latter can also be controlled via a swivel wheel. It also gets a flat-bottom steering wheel and a black-cream colour scheme. It will be offered with three-row seating adding to its practicality quotient.

The XUV500 will be powered by Mahindra’s new 2.0-litre mStallion turbo petrol and 2.2-litre mHawk diesel engines. Both engines debuted in the recently launched second-gen Thar, but the XUV500’s engines are likely to develop around 190PS. It will be offered with both 6-speed manual and 6-speed torque converter automatic transmissions. An optional all-wheel-drive system could be part of the package.

Mahindra is likely to drop the veils off the new-gen XUV500 in early-2021. Prices could start around Rs 14 lakh (ex-showroom), putting it in the ballpark of the Tata Harrier/Gravitas, MG Hector/Hector Plus, Jeep Compass as well as compact SUVs such as the Hyundai Creta and Kia Seltos.