The Hyundai Venue rival will borrow a variety of bits from the Seltos and is expected to retail from Rs 7 lakh onwards. 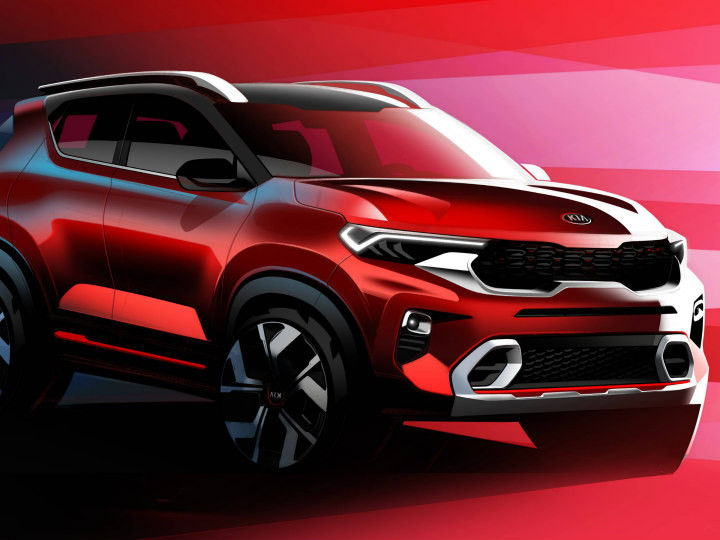 With only a little over a week left until Kia officially debuts the Sonet on August 7, the carmaker has dropped more design sketches of the upcoming sub-4m SUV. Kia dealers across major cities are unofficially accepting pre-bookings but official ones are expected to start as soon as it's unveiled. But if you are eyeing one, then these sketches reveal some significant details about the sub-4m SUV.

Latest design sketches reveal similarities to the production-spec Sonet that was spied testing recently. Notable design bits include a tiger nose grille flanked by sleek LED headlamps, contoured bonnet, aggressive air intakes and butch body cladding. A set of connected tail lamps bring up the rear of the sub-4m SUV. There were earlier hints of two variant lines (GT Line and Tech Line) being planned but the sketches confirm the availability of a GT trim now. Just like the Seltos, the sportier GT Line trim is likely to get red accents on the grille, bumpers, and brake callipers.

The Sonet’s cabin looks upmarket thanks to a clutter-free design and metallic, diamond-knurled pattern surrounds around the vertically-stacked AC vents and at the bottom of the central console. It sports plenty of similarities to the Seltos such as a 10.25-inch touchscreen infotainment system coupled with a digital instrument cluster in a single-frame housing. The steering is uncannily similar to the Seltos as well.

It is set to be packed with features like UVO connected car technology, sound mood lighting, a Bose sound system, steering mounted controls, and different drive and traction modes. It will also get automatic climate control with the likelihood of a wireless phone charger and a sunroof. Safety equipment consists of six airbags with expected staples like ABS + EBD, rear parking sensors with a camera, and electronic stability control.

Under the hood, the Sonet will share the Hyundai Venue’s 1.2-litre naturally aspirated petrol and 1.0-litre turbo-petrol units alongside a 1.5-litre diesel engine. Here’s more on what sort of combinations to expect:

Expect Kia’s third offering in India after the Seltos and Carnival MPV to launch in September 2020. Prices are likely to start from Rs 7 lakh onwards. Once launched, the Sonet will go up against the likes of the Hyundai Venue, Ford EcoSport, Tata Nexon, Maruti Suzuki Vitara Brezza as well as the upcoming Nissan Magnite and Renault Kiger.