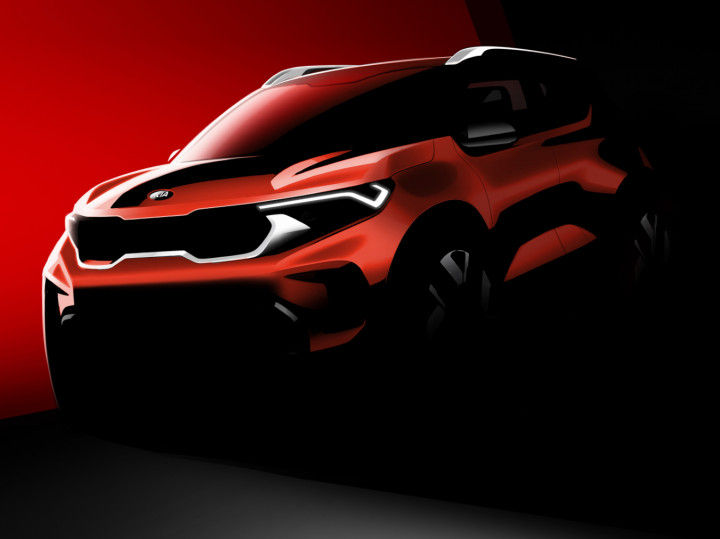 The first sketch of the production-spec Kia Sonet has been revealed ahead of its debut on August 7. First impressions of the Hyundai Venue rival are positive as it looks similar to the concept. But during the time we received this release, we managed to spot a Sonet test mule, revealing its design in full with minimal camo. Here's a look at Kia’s sub-4 metre SUV which is set to reach showrooms this festive season.

The Tiger Nose grille flanked by sleek LED headlamps seem like a straight lift from the concept while the aggressive air intakes lend it a sporty look.

A heavy dosage of body cladding gives it a butch stance. While the mid-spec variant comes with steel wheels, top-spec versions are likely to utilise dual-tone alloy wheels.

At the rear, the connected tail lamps is a straight lift from the concept. It looks cool and similar to expensive Audis. The faux skid plate on the rear bumper gives it a rugged look.

There could also be a sportier GT Line trim with plenty of red design elements in the grille, bumpers, brake callipers and the body cladding as seen on the bigger sibling, the Seltos.

Previous spy shots also revealed the production-spec Sonet’s interiors. The design language is quite similar to a Seltos courtesy the large 10.25-inch floating infotainment system. That said, the redesigned central console differentiates it from the larger SUV.

The Sonet will utilise the Hyundai Venue’s powertrains including the recently launched iMT clutchless manual gearbox. You can read how the iMT gearbox works right here. It’s also highly possible that the diesel variant could be offered with a 6-speed automatic transmission. Here are the specs of all three powertrains:

The Sonet is expected to be priced from Rs 7 lakh (ex-showroom) and it will go head on with the Hyundai Venue which has received some crucial upgrades. The Sonet’s other rivals include the Ford EcoSport, Tata Nexon, Maruti Suzuki Vitara Brezza and the upcoming Nissan Magnite.