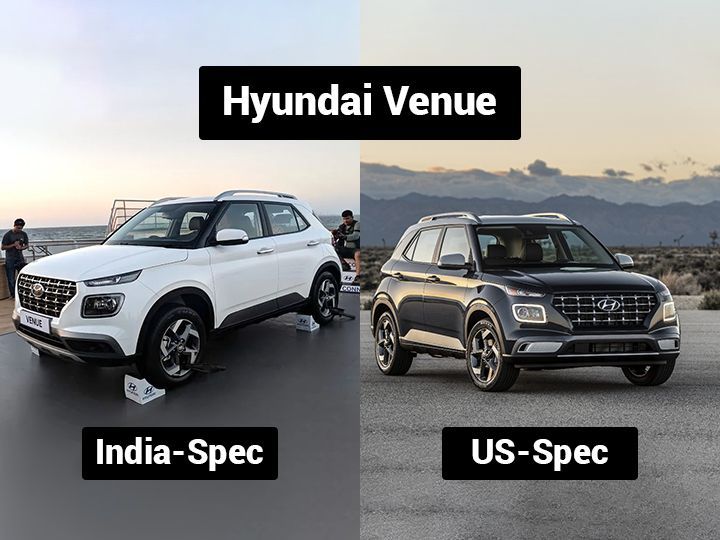 The Hyundai Venue is all set to take on its fierce rivals in the hotly contested sub-4 metre SUV segment. Unveiled simultaneously at the New York Auto Show and in India, the US-spec Venue differs ever so slightly from the version that is set to go on sale in India on May 21. So let’s take a look at what sets the two apart.

The US-spec Venue is 43mm longer than the SUV that will go on sale in India. It is also taller and has a longer wheelbase than the India-spec SUV. The India-spec SUV tucks in under four metres in length to be eligible for reduced taxation under India’s sub-4 metre car rule. Although the India-spec Venue has a wheelbase that is 19mm shorter than the US-spec version, expect it to offer as much as space for occupants. However, the boot space is likely to take a toll as the US version boasts of a massive 530 litres while the Indian version is likely to have an estimated boot space of over 350 litres. The mere difference of 2mm in height between both versions is most likely due to the larger 17-inch wheels on the US version.

These are differences that only a keen eye can take notice of, but there are also some dissimilarities that meets the eye. For instance, the US-spec Venue gets a different bumper design with white three-dimensional ‘+’ shaped elements without any fog lamps. The Indian version has the same physical feature in black colour, albeit with fog lamps. The Indian version also features aluminum finished lower bumper inserts around the central air dam and in the lower most part of the bumper. At the rear, the same ‘+’ shaped elements are highlighted in white for the US specific variant while it is finished in black for the Indian variant. The Indian version also misses out on a dual-tone roof  compared to the US variant, but judging from Hyundai’s affinity towards updating the feature list of its models every once in a while, expect it to come later as an add-on, as is the case with the Creta.The India-spec Venue comes with 215/60 R16 tyres while the US version offers up to 17-inch wheels with 205/55-section tyres.

And while the US version comes with three headrests at the rear, the Indian version makes do with just two. The seats though look more or less similar, but the seat upholstery is different on both versions.

The Venue in India is loaded to the brim with features. But the Indian version, even though it comes with all the goodies one could hope for, still misses out on a few when compared to the US version. First up is the omission of drive modes and heated seats and ORVMs, the controls for which can be found in the area around the gear shifter of the US-spec SUV. The India-spec version, on the other hand, features a small storage space in the same area. Extra safety features on the US version include forward autonomous emergency braking, lane keeping assist, blind-spot collision warning, driver attention warning, and  rear cross-traffic warning. The BlueLink in the US variant also gets Amazon Alexa and Google Assistant integrated from the factory.

The Indian Venue comes with a choice of three engines and three gearboxes.There is a new 1.0-litre turbocharged petrol engine that makes an impressive 120PS of power and 172Nm of torque. This engine option can be had either with a new 7-speed DCT automatic or a 6-speed manual. Other engine options available in the Venue are the Elite i20-sourced 1.2-litre petrol and 1.4-litre diesel units. The 1.2-litre petrol makes 83PS and 115Nm while the 1.4-litre diesel puts out 90PS and 220Nm. The diesel engine comes mated to a 6-speed manual transmission while the 1.2-litre petrol can only be had with a 5-speed manual transmission.

The US version comes with one engine and two gearbox options. The 1.6-litre Gamma MPI makes 121PS of power and 153Nm of torque and it comes mated to either a 6-speed manual or a CVT.

While the India-spec Hyundai Venue misses out on some goodies from the US version, Hyundai India has offered it with enough kit while keeping the price under check. Even with the kit it misses out on, the India-spec SUV has still got all what you want in a car from this segment. Hyundai will officialy launch the car on May 21 in India with prices expected to start from Rs 7.20 lakh to 12.00 lakh (ex-showroom India).