This Electric Bike Has A 4-Speed Gearbox And Does 120kmph!

Unlike most electric two-wheelers, the Surge does not get a hub-mounted motor 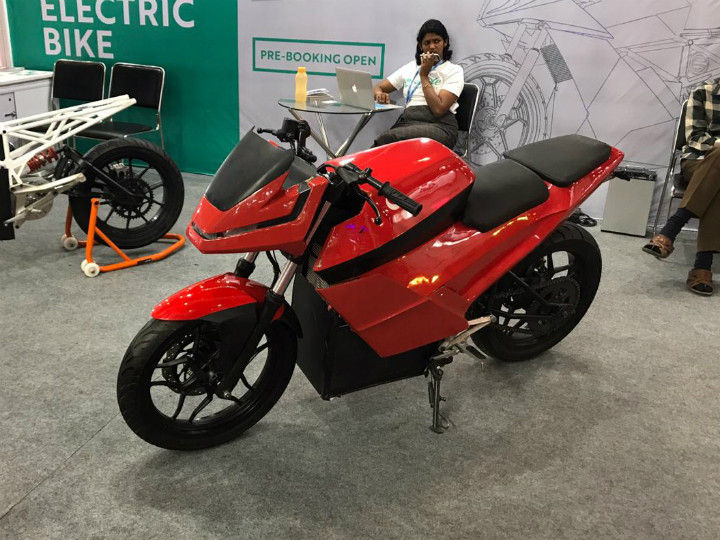 If at first you don’t succeed, try and try again. This seems to be the mantra for eMotion Motors, which has now rebranded itself to Emote Electric. The 2011-formed, Coimbatore-based startup unveiled the first prototype of its electric motorcycle, the Surge, way back in 2018, and it has now showcased it once more at Auto Expo 2020.

Somewhat worryingly, the motorcycle doesn’t seem to have changed much, at least externally, in this two year period. And the only changes that we can spot are for the worse. The upside-down front fork has made way for a conventional telescopic unit, and the prototype on display at the expo was glaringly unfinished, with the naked rolling chassis missing even a final drive chain.

The reason for the Surge needing a chain in the first place is that it doesn’t employ a hub-mounted motor like most EVs, but instead sends its drive via a 4-speed gearbox. This seems a bit counter-intuitive to us, since one of the big advantages of electric motors is their excellent speed-torque characteristics which eliminates the need for a clutch and gearbox. But for the sake of argument, let’s assume that Emote wishes to give its customers a more involving riding experience.

On paper, it seems well set to do this, with a claimed 120kmph top speed and 0-60 time of under 4 seconds. But this being an EV, the big talking point will, of course, be about range. Emote claims a 100km range on a full charge, which can be extended to 200km, or even 300km, by carrying around extra battery packs (they only weigh 26kg each). Of course, by the same logic, I could tow a tanker behind my petrol-powered car and eke out, well, 2000km without needing to refuel. But that’s not how motoring works. Hope you’re listening, Emote.

Also Read: Here’s YET ANOTHER Electric Motorcycle! With A Claimed Range Of 200km, No Less

A full charge of the 2.88kWh battery will require 4 hours with a standard charger or just half an hour with a fast charger, according to the manufacturer’s claims. You’ll also get smart features like Bluetooth and 4G connectivity, ride telemetry, an anti-theft system, keyless operation and customisable rider modes. Everything is held together by a trellis frame and brought to a halt by ByBre disc brakes at both ends. The practicality aspect is taken care of by a claimed 70 litres of storage, but there are no details about where this might be. We can only hope Emote doesn't mean towing a trailer behind you. It’s been a small matter of 9 years since the company was set up, so a functioning prototype could be just around the corner! Exciting times lie ahead.