And as you would’ve guessed it, almost all of them are boxer twins 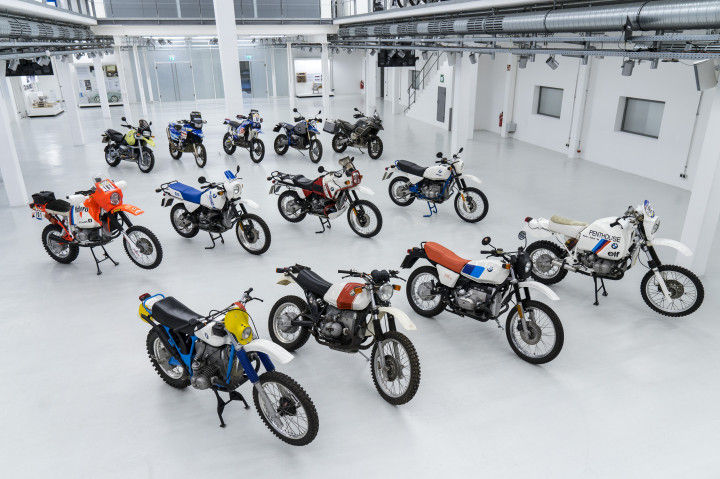 What’s the first thing that pops into your head when we say the two letters GS? Huge? Intimidating? Boxer? Panniers? Yeah, the Bavarian motorcycle family has paved the way for a creation of a different genre of motorcycles that do-it-all. So let's dive into the history of BMW Motorrad’s continental-crushers as we pick our top five favourites from the series:

BMW R 80 G/S - The one that kick started it all
BMW has been making these bikes for over forty years and no doubt it has become the undisputed king of the big-capacity ADV machines. But the first Gelände/Straße (or G/S) was not at all, as surprising as it may sound, big. Yes, the R 80 G/S was sort of a road bike with long-travel suspension. A motorcycle for any terrain. But what brought about this creation?

Well it came at a time when Japanese bikes had flooded the European market, outselling all European bike makers by a country mile. The Japanese did have some dual-purpose machines but they were all small, in size as well as cubic capacity, most of which were around 500cc. BMW did some research at the time and found that while people were buying such bikes, owners spent nearly 98 per cent of the time on tarmac. Thus, the Germans began setting out to make a bike that was certainly going to be larger than the Japanese bikes but offered equal capabilities and more performance. And after 21 tireless months, BMW finally showcased the R 80 G/S at the 1980 Cologne Motor Show.

What BMW had done is taken the 800cc boxer twin engine from the R 80 road bike and the twin loop chassis from the R 65, suspended it on either ends with long-travel suspension units. BMW had also invented a unique single-sided swingarm with a shaft drive mechanism called the monolever suspension, making it quite an easy task to remove the rear tyre or put it back on.

The automotive media were given a small taste prior to its unveil and they came back singing praises about the bike. BMW went ahead and backed the appreciation it received for the bike by winning the 1981 Dakar rally. On the whole, the R 80 G/S had established itself as the motorcycle to have at the time, with nearly 6,500 units sold in the first year itself. In the next six years, the number rose to 21,864 and along with it came three more Dakar victories and a handful of podium finishes.

BMW R 1100 GS - The one that set the format for big ADVs
The BMW GS success story continued with the R 80 GS and R 100 GS, BMW dropping the slash along the way. The go-anywhere bike format was getting popular with few inventions like the paralever suspension truly kicking things up a notch. But the biggest technological advancement for the GS series came in 1993, when BMW unveiled the R 1100 GS, the first proper big-capacity ADV bike.

Up until then BMW had been making two-valve air-cooled boxer twin powered GSes. The R 1100 GS was the first bike to get a four-valve head and the cooling was supplemented by an oil-cooler. Engine outputs of 80PS and 97Nm might sound modest in current times. But back then, it was capable enough to propel this 243kg behemoth to a top speed of 200kmph.

Everything about the R 1100 GS was grand. It weighed 28kg heavier than the old R 100 GS and was 65mm taller. Wheel travel was also increased to a whopping 190mm at the front and 200mm at the rear. Its feature list included twin front disc brakes, a rear disc brake and switchable-ABS. What made it great was not the feature list but the overall balance of the bike. Plus, the impression that it made with its large looks (primarily due to the large 25-litre fuel tank) made it a bike that everyone wanted to be seen riding one. In the six years that it was on sale, BMW sold nearly 40,000 units of the R 1100 GS and even the subsequent R 1150 GS was quite popular.

The 652cc single-cylinder engine was built by Rotax and put out a mere 50PS. It had a redesigned body work and came in two variants: standard and Dakar. What was special about the latter was that instead of the regular 19-inch front wheel you got a large 21-inch rim, more suspension travel and higher ground clearance. Plus, it got knuckle guards, a windscreen and a similar livery to the Dakar race bikes. While the F 650 GS never did win the Dakar, it allowed more riders to jump on the adventure bandwagon. The company sold over 1,00,000 units of the bike until it was finally replaced by the parallel-twin models in 2007.

BMW R 1200 GS - The most adored one yet
Bigger, more powerful, technologically advanced and, most importantly, lighter, the R 1200 GS set new standards in the adventure business that made it a darling for enthusiasts worldwide. Its popularity is such that it is still the highest selling GS motorcycle till date.

BMW upped the ante with a 1170cc boxer twin engine that was water-cooled now, not air-/oil-cooled. Plus, BMW had devised a way to implement a balancer shaft within the boxer twin to rid the engine of any excessive vibrations. Everything was designed to be lighter. The engine was 3kg lighter despite growing in size. The gearbox was 33 per cent lighter than before and as a whole the bike was completely redesigned. BMW managed to shave off a whole 30 kilos from the previous R 1150 GS, which is astounding.

Again, what blew everyone’s away was the balance of the 1200. With the telever and paralever suspension bits now optimised with the inclusion of ESA (Electronic Suspension Adjustment) in 2007, the R 1200 GS was pretty much everything you needed to do the Long Way Round journey (the one which Charley Boorman and Ewan McGregor did on the R 1150 GS, check out this story for more) but in extra comfort and control. BMW rolled out the 100,000th R 1200 GS in 2007, just three years after it first went on sale. The 500,000th GS to ever roll out was also a R 1200 GS, BMW achieving this feat 29 years after the first R 80 G/S left the production line.

BMW R 1250 GS - The most technologically-advanced of them all
It had been over 14 years since the R 1200 GS was on sale and with just a couple of mid-life updates in 2007 and 2009, the big ADV was pretty much unchanged. The R 1250 GS was first showcased at EICMA 2018 and has been a stellar technological marvel ever since. The 1,254cc boxer twin was once again the largest that has ever been fitted to a GS bike with performance also taking a giant leap. But what was more crucial was that the R 1250 GS was now more accessible and easier to use, all thanks to ShiftCam.

ShiftCam is basically BMW lingo for variable valve timing. While the tech has been around for years, this was BMW’s first production motorcycle to get the tech. This allowed BMW to tune to the engine for great low- and mid-range performance without having to compromise on top-end fun. It got Dynamic ESA which modified the suspension damping according to the terrain changes electronically and also loads of other riding aids. All of this wrapped in a package that weighs just 63kg more than the Royal Enfield Himalayan.