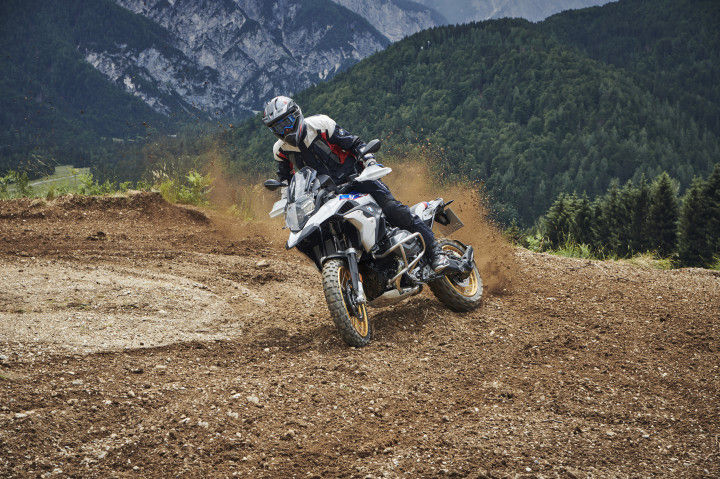 Why would anybody take a 260kg+ juggernaut that is as large horizontally as it is vertically off the beaten path? Logic dictates that you need something light and moderately powerful to hike up trails. Then, why has the BMW GS been such a runaway success, spanning 40 years now, with its horizontally-opposed twin engine and the build that would put Andre the Giant to shame? Masochism, maybe? But the GS wasn’t always this large and intimidating.

After developing and designing the bike for the better part of the late-1970s, in 1980, BMW Motorrad gave the world the R 80 G/S. The bike is regarded as the first adventure motorcycle ever, using the boxer engine from the company’s R 80/7 and fitting it into the R 65’s twin loop frame. Many doubted the need for such a motorcycle at the time, especially when the Japanese were taking the world, mainly Europe, by storm. What followed was unprecedented dominance. At the unveil of the R 80 GS at the 1980 Cologne Motor Show itself, crowds thronged the BMW booth with cheque books. By the end of 1981, BMW had sold over 6,500 units of the R 80 G/S, the Gelande und Strasse did far better than what Motorrad had envisaged. The number rose to a total 21,864 units in 1987.

What helped its case even further was that the R 80 G/S notched up four wins and a couple of podium finishes in the most gruelling rally on Earth: the Paris-Dakar rally. Since its last win in 1985, only two motorcycle manufacturers have managed to build machines that won more than the R 80 G/S, Yamaha, who dominated the 1990s with the YZE850T, and KTM later on with its 660 and 450s.

But the R 80 G/S was always more of a road bike than an off-roader. What drew the crowds to the bike was perhaps that the bike was as effortless in doing high speeds on the Autobahn as much as it was navigating itself through rough terrain. It was never a trail bike. It was just capable of hiking it up if you wanted.

In 1987, BMW dropped the slash in the name and launched two models: the R 80 GS and the larger R 1000 GS. The monolever suspension on the old R 80 G/S was a technological advancement in itself, but the paralever suspension that debuted on these bikes, literally blew everyone’s socks off. The GS set the sales charts on fire and even though BMW introduced a smaller R 65 GS, nearly three-fourth of the 45,000 GS bikes sold until 1996 were the large displacement models.

1993 brought about the R 1100 GS, the first four-valve boxer twin motorcycle. This is literally the bike that took everything to a grand scale. The earlier R 100 GS was 65mm lower and 23kg lighter. The telelever suspension was introduced, further enhancing the GS’s great handling characteristics. The actual suspension duty was handled by the semi-trailing arm attached to the fork while the fork was taking care of the bending moments induced during braking or while going over rough surfaces. Further more, the new boxer engine, borrowed from the R 1100 RS, was capable of propelling this giant to 200kmph. That was the touring bit covered then. It got longer travel suspension at both ends, 190mm at the front and 200mm at the back.

Then, in 2004, messrs Ewan McGregor and Charley Boorman took two R 1150 GSes (which was launched in 2002) on trans-continental journey called the Long Way Round. Boorman was really keen to take KTMs, given the Austrian brand’s pedigree in building off-road vehicles but it was McGregor’s persistence with BMW and KTM’s refusal of lending the bikes that made them choose the GS. The Force then was strong with this one.

If you think the Indian chapter of the BMW GS history began with the brand’s arrival in 2017, you are highly mistaken. In the late 1990s, BMW sought to enter India with a local ally, who turned out to be Hero. The Indo-German deal was to build cars and bikes in India. Hero also launched the BMW F 650 Funduro. It might not have adorned the GS badge of honour, the Funduro was our first taste of adventure motorcycling. Had things gone to plan, it could have paved the way for more adventurous motorcycles flooding the market, the likes we are still dreaming of seeing on our roads. Sadly, it was far too expensive for anyone to own in 1997. Prices started from Rs 1.8 lakh and escalated to a shocking Rs 5.2 lakh in the subsequent six months. Rs 5.2 lakh is still considered a lot for a motorcycle and this was still the 1990s. Needless to say, the project failed and the unsold bikes began going off for as much as the original price or even lower.

But things were different for Motorrad in 2017, Indian enthusiasts had enough financial power to own a R 1200 GS, a bike that was ten times dearer than the initial asking price of the F 650. A similar success story continues with the R 1250 GS which is perhaps the most technologically advanced adventure motorcycle in its class. Somehow, the smaller parallel-twin GS siblings have not managed to pique the interest of Indian GS-afficianados as much the 1200/1250 has. The G 310 GS has opened the doors for owning a GS motorcycle but still it doesn’t do complete justice to the name.

There is just something about the boxer twin charm which is missing on the others. Yes, the G 310 GS is the lightest of them all, the F 850 GS is the most capable one and the F 750 GS is the sensible choice but none of them strike the right chords. I will admit it, I was, and am still, intimidated by the sheer size of the R 1250 GS. It is as large and wide as a Tata Nano and costs five times as much. And in the chance that it falls on its side, you fear that you might not be strong enough to lift it back up. And even after training to keep the bike the right side up at the BMW GS Experience last year, I still would be second guessing taking the bike off-road. It isn’t the bike, you see. It is me. The rider. You need to overcome its presence and understand what it is capable of doing. And for those fleeting moments where I truly got to experience just how effortless riding the R 1250 GS is, it did make sense for having a bike like this in the garage.

In our recent interview with Royal Enfield historian, Gordon May, which we totally recommend you check out if you are a biking, let alone a Royal Enfield enthusiast, we asked him what he thought of the behemoths that are adventure motorcycles. While he did take a slight dig at their monstrous dimensions, he said that they are quite an engineering marvel, subtly dropping the 1250 name while praising them. And he is right. The weight difference between the 411cc Royal Enfield Himalayan and the 1,254cc BMW R 1250 GS is just 63kg!

The GS remains the bread and butter bike for BMW Motorrad for the past 40 years and we think it will continue to do for the next 40. Riding on our roads is no less adventure in itself and the words Gelande und Strasse couldn’t describe our roads better.