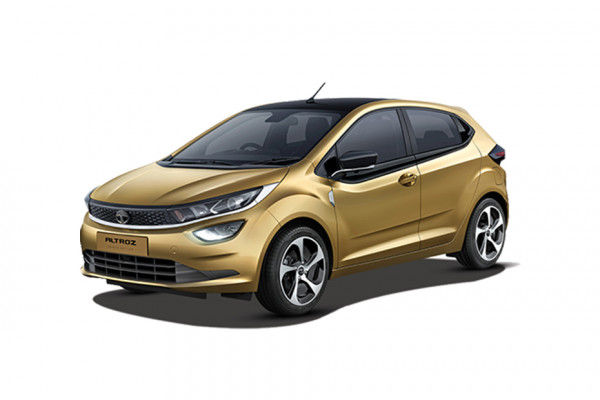 A more powerful Tata Altroz with a 1.2-litre turbo-petrol engine is expected to launch soon. This engine develops 102PS and 140Nm and could be offered with a DCT automatic transmission.The Altroz turbo-petrol is expected to be launched by the end of 2020.

Tata Motors launched the Altroz, its first offering in the premium hatchback segment, from Rs 5.29 lakh to Rs 9.29 lakh (ex-showroom). It rivals the Maruti Suzuki Baleno and Hyundai Elite i20. The Altroz comes with two BS6-compliant engines: an 85PS 1.2-litre petrol and a 90PS 1.5-litre diesel.

The Altroz is powered by BS6-compliant 1.2-litre petrol and 1.5-litre diesel engines. The petrol engine delivers 85PS and 114Nm, whereas the diesel motor produces 90PS and 200Nm. Both engines are paired to a 5-speed manual gearbox. The Altroz gets a boot space of 347 litres along with a ground clearance of 165mm.

The Altroz is available in 4 variants - XE, XM, XT and XZ.

The signature golden shade on the Altroz shimmers elegantly in the desert sun, but it does little to soften this Tata’s assertive personality. There is also a dash of determination in the Altroz’s face, its forehead jutting out in a determined way while the halogen headlamps seem to lock in on you, or its prey. The projector units for the low beam only highlight this sensation. The ORVMs, roof and the taillamps are finished in contrasting black which adds a touch of stealthiness. The hood and the blacked-out sash under the window line races towards the C-pillar making the Altroz look fast even at a standstill. The 16-inch dual-tone and laser cut alloys look cool on this top-end XZ variant. The rear door handle has been pushed up too near the C-pillar. It is cool, but because of the mechanism being deeper in the recess, it is an awkward two-step process. Look closely at the upper corners of the rear windscreen and you will spot additional elements that help improve aerodynamics. Interestingly, the Altroz name is written at the centre of the tailgate with the reversing camera sneaking in between.

The Altroz welcomes its occupants with its 90 degree opening doors, to makes it easier to get in and out for older occupants. There is also a sense of solidity and sophistication in the way the doors open and shut with a satisfying “thwump”! Then there are bits that feel so right, like the well-damped power window switches and the flat-bottom steering wheel that is wrapped in premium leather. The rubberised finish for the steering boss transports you to a richer world too. The 7-inch colour MID in the instrument cluster is large showing you the rev-counter, trip info, power and torque readouts, music information and navigation information if you have an Android Auto or Apple CarPlay enabled device plugged into the infotainment system.

Volkswagen Polo: The Polo may not have set the sales charts on fire but it has its own little fanclub. Primary reasons being the rock-solid build quality inside out, and the fun-to-drive engines in the GT variants. It might seem a bit dated to some, but we aren’t complaining just as yet!

Honda Jazz: With space that could shame a few apartments in Mumbai, the Honda Jazz is a sensible hatch for the practical lot. The engines are refined, equipment levels are on par with its peers and it’s backed up by Honda’s reputation for reliability and after-sales support.

Maruti Suzuki Baleno: A properly well-rounded package, the Baleno is hard to fault. It’s got the right mix of fun, practicality, tech and frugality.

Hyundai Elite i20 : The one that has it all! The Elite i20 brings a sense of class and features to this segment like no other. Premium build, loads of kit on offer, looks that turn heads and space for five. What more do ya need, eh?

Q. Which will be a better pick for a family car between Tata Altroz or Renault Triber. I need features, safety, family car, space , better comfort on bad roads and sufficient engine for comfort performance.
Q. What is the mileage of Altroz in diesel and price? View All Answers
Q. Is Altroz available in automatic transmission?
Q. Should I buy Tiago XZA or Altroz XE rythm variant? I am confused between comfort and premium hatchback. Tiago XZA providing all the features but it is a hatchback and Altroz is a premium hatchback I can upgrade it after market. Please suggest which should I buy? Also tell me your choice between tiago xza or nios xma.
Q. Why should I buy Tiago over Altroz? View All Answers
Q. What is the price of Tata Altroz in CSD?
View More Questions
Q. What is the maintenance cost of Altroz?
Q. Which car is better Glanza or Altroz?
Q. Is Tata Altroz launching with BS6 technology?
Q. Is the petrol engine of Tata Altroz underpowered for this car? Is it any better than the one in 2019 Aspire?
Q. Which is better Tata Altroz and Hyundai Grand i10 Nios?
Q. Should we book Altroz right now or wait for user reviews?
View More Questions
All Altroz Questions and Answers

Tata's new ALFA Arc platform begins it's baptism of fire in the competitive premium hatchback segment with the Altroz. Will this be a memorable first flight?