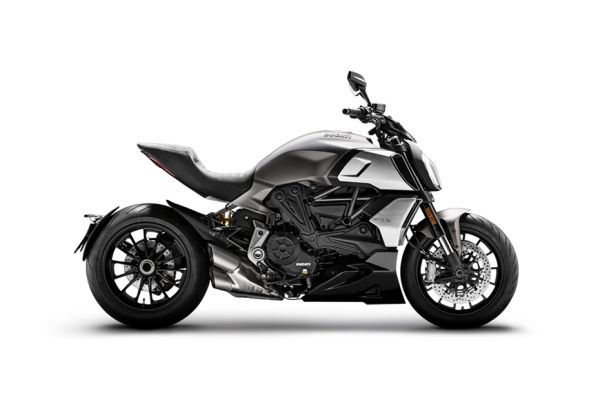 Ducati Diavel 1260 is a cruiser bike launched at a base price of Rs. 17.70 lakh in August 2019 by Ducati in India. Diavel 1260 is powered by 1262cc engine claiming mileage of 8kmpl. Diavel 1260 has a ducati testastreta dvt 1262, l-twin cylinder, 4 valves per cylinder, dual spark, desmodromic variable timing engine and a 6 speed gear box. Ducati Diavel 1260 comes with disc breaks in front and rear with a support of ABS. It is available in 2 variants and 3 colours.

The Ducati Diavel 1260 has been launched in India at Rs 17.70 lakh (ex-showroom India). As the name suggests, the bike gets a new and larger 1262cc DVT L-twin motor that replaces the earlier 1198cc L-twin, and now makes more power and torque. The Italian brand also launched a sportier variant, the Diavel 1260S, that gets fully-adjustable Ohlins suspension, machined alloys, Brembo M50 monobloc brake calipers and bi-directional quickshifter. This motorcycle is priced at Rs 19.25 lakh (ex-showroom India).

The Ducati Diavel 1260 and 1260 S look a lot more aggressive and feature sharply raked lines. While the tank extensions are smaller, they now feature more pronounced air ducts. The lighting system is all-LED, and the front LED turn indicators are smartly integrated into the radiator shrouds. Other features include a digital TFT screen, keyless ignition and a multimedia system (standard in the S variant).

The bike weighs 5kg more than before while the seat height has gone up by 10mm. The trellis frame has been updated with rake being dropped by 1-degree and trail dropped by 10mm. The wheelbase has grown by 20mm. Riding aids now include Bosch cornering ABS apart from 8-level traction and wheelie control, rider modes and Ducati Power Launch Evo.

Brakes include dual 320mm discs with radial calipers up front and a 265mm disc at the rear. The bike employs inverted forks up front and a monoshock at the rear - both fully adjustable. The alloy wheels are wrapped with Pirelli Diablo Rosso III tyres.

Does a larger engine just make the new Diavel a better muscle cruiser? Or is there more to the new bike under all that brawn?