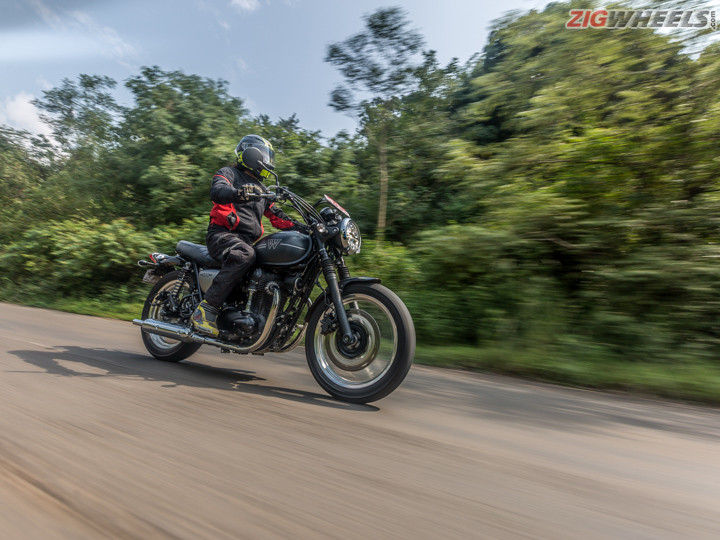 Modern classic motorcycles have gained a lot of momentum in the past decade with each two-wheeler manufacturer aiming to go retro. As appealing as superbikes are and as intimidating as ADVs can be, retro motorcycles represent something elementally simple about motorcycling. In recent years, Triumph has made the genre popular and Royal Enfield (who has British roots) has made the ‘British twin’ accessible with the 650 twins. The last place you expect a bike like this to come from is in the Land of the Rising Sun. But that’s exactly what the Kawasaki W800 is - an authentic lookalike of the Norton, Triumph and BSA twins that dominated the scene in the 1970s and 80s. So, are the similarities only skin deep, or does the W800 truly manage to evoke the nostalgia that one associates with classic British twins?

Charming Motor
The true essence of a British twin remains, obviously, a parallel-twin engine. This 773cc air-cooled, fuel-injected engine is more ‘classic’ than either of the 900cc or 1200cc motors of the Bonnies, or even the RE 650 for that matter. It doesn’t have a 270-degree crank like the aforementioned bikes but rather a 360-degree one, just like on the good ol’ British bikes.

Via this configuration, an even engine ignition firing is obtained, which helps in laying down the power in a smooth creamy manner. But with two pistons moving up and down simultaneously, smoothness can be an issue, especially with a long-stroke motor that it is. Luckily, the compression ratio is very relaxed, only 8.4:1, with a counterbalancer present. It is quite easy going and doesn’t have a sense of urgency to it.

Still, it is a quick motorcycle. It might be putting out only 52PS and 62.9Nm but the Kawasaki W800 shoots off the line to reach 100kmph in 6.24 seconds. It will even cross the 140kmph mark a few seconds later. Post that though, you get the feeling that it doesn’t really want to crack the ton (100mph or 160kmph). It would rather have you sit peacefully at 4250rpm in fifth gear, clocking 120kmph. If you drop your pace further, settling down to cruise at 100kmph, you will get 29.68kmpl on the highway. And with 15 litres on board, you can look at going around 440km.

This lumpy engine is rather tractable too, surging forward like a diesel engine, with dollops of torque at your disposal. It can trundle along at speeds as low as 35kmph in fifth gear, extremely commendable for a large bike. It posts some respectable in-gear roll-on acceleration times, 4.39 seconds in the third gear 30-70kmph run and 5.22 seconds in the fourth 40-80kmph run. It is definitely slower than the Royal Enfield Interceptor 650 as the Kawasaki’s five-speed transmission has some pretty tall gear ratios.

21.24kmpl of fuel efficiency in the city is par for the course for a motorcycle of its size and capability. What adds to the experience of pottering around at slower speeds is the symphony from the peashooter exhausts. It has a deep burbling tone at low revs and as you pick up pace, you are enchanted with a little crackle, pop and bang accompanying the rumbling every now and then.

Easy There Rider
The easy going nature of the engine pairs nicely with the relaxed steering geometry, long wheelbase and low-slung setup. It doesn’t like being hustled from one corner to another and would much rather be ridden calmly. The lethargy might make it appear boring to those who like energetic bikes but mature riders will likely appreciate this finer experience.

Those riders will also appreciate that despite weighing 224kg, it doesn’t feel all that heavy. The heft is evenly distributed along its 1,465mm wheelbase with ample leverage offered by the wide beach bars. And since you won’t be hustling through bends, the lack of cornering clearance will not be a bother either.

The suspension tune is plush but not wallowy. Mid-corner bumps are absorbed to a great extent, with the rider rarely losing composure and control over the bike in such scenarios. The stock tune is good enough for two-up riding as well, with the rear units never really bottoming out. Smaller road imperfections are hardly felt but you have got to be rather cautious over the small sharp speed humps. The ground clearance is a paltry 130mm. With a hefty rider, the W800 does scrape its belly, which is not a nice feeling.

The rather simple braking setup on the W800 and its heft translate into slightly long braking distances. Taking 50.72m to come to a dead halt from 100kmph is not a first-class figure. Thankfully, the brake bite is good, lever feedback is decent, and there is enough progression in the system to make you have confidence in the brakes. ABS intervention is very controlled and doesn’t cut in haphazardly as we experienced on the Ninja 650 and the Z650.

A Bit Too Old School
The Kawasaki W800 fits the bill of a big bike quite well. Its stretched-out proportions and rounded elements go well with the retro theme. There is enough chrome to spruce up the bike but as a whole, the W800 can look a bit dull. It only arrives in this grey-ish black colour scheme, no vibrance or greenery here. Dull or dark coloured classic bikes can look good - just take a look at the Bonneville T100 Black. But the W800 somehow just doesn’t look as cool as the Bonnie and feels a bit underwhelming if we’re being honest.

The relaxed motor mannerisms are complemented well by the comfy ergos. You get a great view of the road ahead, despite being perched at a low 770mm. The footpegs are rather mid-set and not too high, allowing you to quickly flat foot the bike in case the need arises. Even moving it around in the parking lot is manageable and not a breathtaking (literally!) or shin-bruising task, like it is on certain other British twins.

You will notice a few blemishes on the bike, though. The beach bars, while not a personal favourite, do flex a bit, especially when braking hard. Then there’s the console, twin pods with a small digital inset that displays only the odometer, trip meter, and clock. There’s no fuel gauge here, only a low fuel indicator, which doesn’t provide much assurance if you are looking to go for miles on end. The lack of a gear position indicator is not felt that much but Kawasaki clearly could have made better use of the digital bit.

Then, there are the switches. Despite looking era-specific, they aren’t up to the usual standards of Kawasaki, making it feel rather un-premium. The overall fit and finish levels too have dipped as crude welds are the last thing we expected to see on a Kawasaki motorcycle.

Our test bike was riddled with a set of issues. The front brake caliper mounting bolt fell off barely 20km from picking the bike up from the factory in Chakan. This was a major problem that could have proved to be dangerous and is unacceptable in our books. Plus, this particular unit had major wiring issues. The starting system rarely worked, forcing us to bump start the 224kg lump of metal on multiple occasions. The electrical sensors would intermittently bump up the revs at idle to over 2000rpm or even drop them below thousand. These irregularities are least expected from Kawasaki, a brand not known to have such pertinent issues.

Worthy For Your Garage?
The W800 is quite a nice, relaxed motorcycle that will make you enjoy all the small joys in life. It doesn’t like to be hustled, expecting you to ride sedately and in a matured way. As a big bike, it does look the part, but an uninspiring colour and the lack of premium features lower its appeal. Is it worth the Rs 6.99 lakh (ex-showroom India) price tag though? That’s a hard no. It does excel over the Royal Enfield Interceptor 650 in certain areas, like cruiseability and tractability, but not by a big margin. It isn’t even as tech-loaded as the similarly-priced Triumph Bonneville T100. If only Kawasaki could bring the price down by a couple of lakhs or introduce the more appealing W800 Cafe version in India, then we, quite likely, would be inclined to recommend it over its established rivals.